A German politician has called on US presidential candidate John McCain to take back disparaging remarks made about Germans by his campaign after Barak Obama visited Berlin last week. 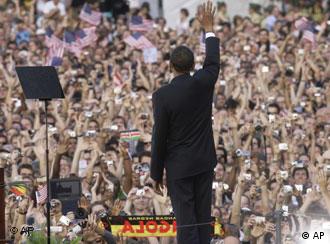 Alexander Graf Lambsdorff, a member of the European Parliament for Germany's free-market liberal FDP, said McCain should "as soon and as clearly as possible" distance himself from comments made by his spokesman ridiculing Germans, according to a report in German daily Tagesspiegel on Tuesday, July 29.

In an interview with Fox News, McCain spokesman Tucker Bounds said, "You know, it really speaks to the experience that Barack Obama lacks. He prioritizes throngs of fawning Germans over meeting with wounded combat troops in Germany."

Obama addressed a 200,000-strong cheering crowd in downtown Berlin last week in a speech which received huge coverage in the international media.

Lambsdorff wrote that he, and the German public, was surprised and dismayed by the comments, according to the newspaper.

He added that Germany hoped Europe and the United States were entering a more constructive period for transatlantic ties, which is why McCain should “so quickly and clearly as possible” retract the insulting comment by Bounds.

A spokesman for Republican presidential candidate John McCain blasted Barack Obama for cancelling plans to visit wounded US soldiers while in Berlin, adding that the Democrat prioritized "throngs of fawning Germans." (28.07.2008)

Barack Obama's speech in in Berlin on Thursday, July 24 was largely seen by German experts and commentators as a success. He pulled off the delicate balancing act he needed to, they said. (25.07.2008)