Barack Obama's speech in in Berlin on Thursday, July 24 was largely seen by German experts and commentators as a success. He pulled off the delicate balancing act he needed to, they said. 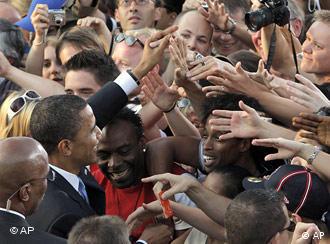 As the man in the dark suit and blue tie who walked up to the microphone in front of Berlin's Victory Column, the crowd of over 200,000 erupted in cheers, hoping to hear magic words from the senator from Illinois that could restore America's battered reputation in Germany and around the world.

And while he appeared calm and composed as he spoke for the next 27 minutes, the presumptive US presidential candidate likely knew he was performing on a high wire for two very different audiences: the largely German one in front of him and the American voters at home, who will be the ones who determine if his next office will be an oval one. Two different interest groups, in a way, that needed both to be satisfied.

According to several expert observers in Germany, Obama maneuvered that tightrope skillfully. 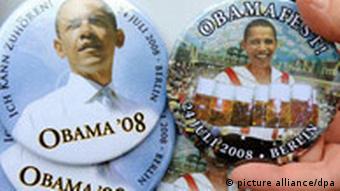 "I thought his manner of speaking was very impressive," said Stormy Mildner, a senior researcher at the German Institute for International Security Affairs. "It wasn't just a campaign speech, but a trans-Atlantic keynote address as well."

In his talk in front of an enthusiastic crowd of more than 200,000, Obama, describing himself as a "proud American" but also a "citizen of the world," issued a strong call for unity across the Atlantic and beyond on issues of foreign policy. He said close cooperation was necessary in the face of new threats such as terrorism, religious extremism, global warming and poverty.

"From start to finish, what came out very strongly was that the trans-Atlantic relations have to be strengthened," Mildner said. "It was a message of when we move forward together, we are strong, and when we are divided, we are weak."

US has made 'mistakes'

She said from her perspective as part of the listening audience on Thursday, the crowd especially appreciated Barack's throwing a slightly critical eye on the US. He said his country had made mistakes in the past that had alienated its allies.

"We've made our share of mistakes, and there are times when our actions around the world have not lived up to our best intentions," Obama said.

But he held out the promise of correcting those mistakes and adhering to long-held American values that many Germans feel the US under the Bush administration has abandoned.

"That was really what Germans wanted to hear and it was very well received," Mildner said. 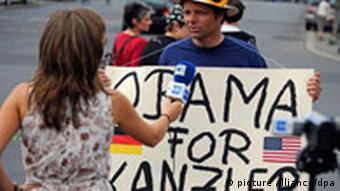 76 percent of Germans think Obama is the better candidate, according to one poll

The crowd was somewhat less receptive to calls for more European commitment in Afghanistan or aid in rebuilding Iraq. Both are controversial topics in Europe and likely to lead to some trans-Atlantic disgruntlement is Obama does become president and starts making demands, for example, for more German troops in Afghanistan.

"He explicitly called for German soldiers for Afghanistan -- he did not say 'more soldiers' but that was what he meant," said commentator Reymer Kluever in the Sueddeutsche Zeitung daily. "And Obama also indicated this: he will want support as president to wind up the Iraq adventure."

According to Josef Braml, an expert on trans-Atlantic relations at the German Council on Foreign Relations, that could be a part of the Obama message most Germans would rather overlook.

"The German side could be set up for some disappointment," he said.

But that is part of the balancing act, he added, that Obama had to carefully maintain during this trip abroad. Trans-Atlantic relations are important, but so was making a positive impression on the voters back home.

How it plays in Iowa

One of Obama's central weaknesses against his Republican opponent John McCain is the thinness of his foreign policy résumé and the fears of some voters whether Obama can hold his own with foreign leaders or succeed as commander in chief. The speech and the pictures of Obama in Afghanistan, with Israeli and Palestinian leaders and with German Chancellor Merkel were designed to counter those worries.

"It did the trick in that it sent home the image that America under the leadership of Obama would be well respected, more respected than it has been during the Bush administration," he said.

But it was important that Obama not be seen, as some had feared, as too "European," a perceived status that can hurt a candidate with sections of the American electorate. Obama did that by talking about issues that a Republican candidate might also feel comfortable with: Iraq, the threat from Iran, the need to combat terrorism. His call for Europeans to step up to the plate and help American shoulder some of the burdens of security around the world was also aimed primarily at voters in Boise, not Berlin.

"For his electoral crowd at home, he also needed to tell people in Europe they have to pay their dues," Braml said. 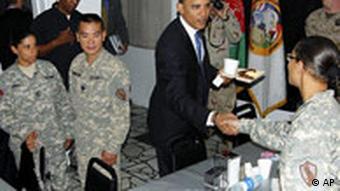 While press reports in Germany generally praised the talk overall, some remarked that the speech did not have a "JFK moment," such as an "ich bin ein Berliner" sentence that would go down in the history books. In the run-up to Obama's visit, the German press was full of comparisons to the president who visited a divided Berlin in 1963 and gave his famous speech that cemented US-German bonds.

But Braml pointed out that the senator had to be careful about going into specifics, since many would see it as if he were acting like he were already president. And in a campaign, it is wise not to give you opponent ammunition by going into the details, he said.

Berlin's Tagesspiegel newspaper said Obama wanted to convince voters in the United States that world will also listen to a black president.

"He hasn't made any mistakes on the trip," said researcher Mildner. "It has shown that he has authority far beyond America's borders."

After receiving a welcome Berlin usually reserves for rock stars and soccer players, US presidential candidate Barack Obama moved on to Paris, where President Sarkozy called him a "buddy." (25.07.2008)

DW's Daniel Scheschkewitz says that US presidential hopeful Barack Obama gave a rhetorically impressive speech in Berlin on Thursday. But he adds that it might help him little in the race for the White House. (25.07.2008)

German papers on Friday generally applauded US presidential contender Barack Obama's Berlin speech. But some also added that Germans now had to wake up and smell the coffee. (25.07.2008)