McCain Takes Swipe at Obama, Germans Over Berlin Visit | Germany | News and in-depth reporting from Berlin and beyond | DW | 28.07.2008

A spokesman for Republican presidential candidate John McCain blasted Barack Obama for cancelling plans to visit wounded US soldiers while in Berlin, adding that the Democrat prioritized "throngs of fawning Germans." 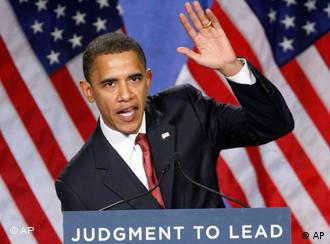 Republicans are zeroing in on Obama's reception in Berlin

Hours before Obama arrived back in the US on Saturday, McCain's spokesman Tucker Bounds questioned why the Democratic senator cancelled Friday's scheduled meeting with American troops at the Landstuhl military hospital in Germany.

"You know, it really speaks to the experience that Barack Obama lacks," Bounds told Fox News.

"He prioritizes throngs of fawning Germans over meeting with wounded combat troops in Germany," he added, referring to the crowd of over 200,000 people who gave Obama an effusive welcome at his outdoor address on Thursday evening in Berlin.

McCain's team also raised the cancelled hospital visit in a new television ad in which a narrator berates Obama for making time to go to the gym, but not finding the time for injured soldiers.

The Obama campaign explained at the time of the cancellation that the senator had made a decision to avoid drawing wounded troops into the back-and-forth of campaign politics. The campaign also noted that reservations about the visit had been expressed by the Pentagon.

Some analysts see the McCain team's attack as a case of sour grapes following the overwhelmingly positive public response to Obama in Europe. Republicans are instead trying to brand the trip -- which saw Obama stop in Afghanistan, Iraq, Israel, Kuwait, Jordan, Germany, France and the UK -- a shallow political stunt.

The German government sees the Berlin speech by US Senator Barack Obama as "a positive signal to Europe," an official spokesman said on Friday, as the Democratic Party presidential hopeful left for Paris. (26.07.2008)

Barack Obama's speech in in Berlin on Thursday, July 24 was largely seen by German experts and commentators as a success. He pulled off the delicate balancing act he needed to, they said. (25.07.2008)