The US and Israel opposed the law restricting restitution claims to a 30-year period. The law concerns prewar property owners and critics say Jewish claimants are disproportionately affected. 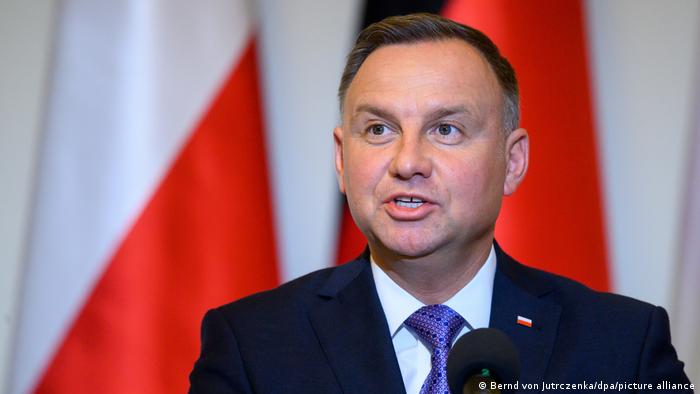 Polish President Andrzej Duda signed legislation Saturday that restricts the rights of former prewar Polish property owners, including Holocaust survivors and their descendants, from the right to make claims if their real estate was seized by the Nazis or nationalized by the Soviet-backed communist occupation regimes.

The law passed parliament Wednesday and received wide support across the domestic political spectrum. The US and Israel, however, stand firmly opposed with US Secretary of State Anthony Blinken calling on President Duda to veto it.

Duda said, "I am convinced that with my signature the era of legal chaos ends, the era of re-privatization mafias, the uncertainty of millions of Poles and the lack of respect for the basic rights of citizens of our country."

Israeli foreign minister Yair Lapid disagreed, asserting the legislation "damages both the memory of the Holocaust and the rights of its victims."
Israel reacted to the signing of the legislation by recalling the head of its diplomatic mission to Warsaw and announced it will not be sending a new ambassador at present.

Duda said he strongly objected to suggestions that the law was directed against Jews who survived the Holocaust carried out by Nazi Germany in occupied Poland. The law concerns all prewar property owners, but critics charge Jewish claimants were much later in making their case.

Prior to the Second World War, Poland was home to 3.5 million Jewish people, Europe's largest Jewish community.  The vast majority were killed during the Nazi German occupation and their properties were confiscated.

After the war, the Soviet-backed communist authorities nationalized these properties along with many other properties of non-Jewish prewar ownership.

When communism fell in 1989, the possibility of restitution for these thefts opened. Many prewar owners attempted to claim and regain their stolen real estate.

Without restitution or recompensation, a modern legal gray zone

Poland never passed a comprehensive restitution or recompensation law, unlike many other countries in Central and Eastern Europe.

As a result, some cases made their way through the courts, other individuals were stymied in their efforts and some claims were beset by fraud as criminal gangs made false claims, sometimes acquiring high-end properties and evicting tenants.

In 2015, Poland's constitutional court ruled there should be specific deadlines after which administrative decisions over property titles could no longer be challenged.

US Secretary of State Blinken argued the law severely restricts the "process for Holocaust survivors and their families, as well as other Jewish and non-Jewish property owners, to obtain restitution for property wrongfully confiscated during Poland's communist era."

Critics charge the law disproportionately affects Jewish claimants as they were late to launch claims.

In a statement, the World Jewish Restitution Organization said, "Property restitution is about more than money  for many of Holocaust survivors and their families, a home is the last remaining physical connection to the lives they once led."

Israeli Foreign Minister Yair Lapid put it more sharply, "I will continue to oppose any attempt to rewrite history, and to promote concessions that come at the expense of the Holocaust, of the Jewish people or the rights of Holocaust victims."