Polish officials cited a "difficult and dangerous" situation on the border with Belarus. Tension has grown in recent weeks over groups of migrants attempting to cross into the EU. 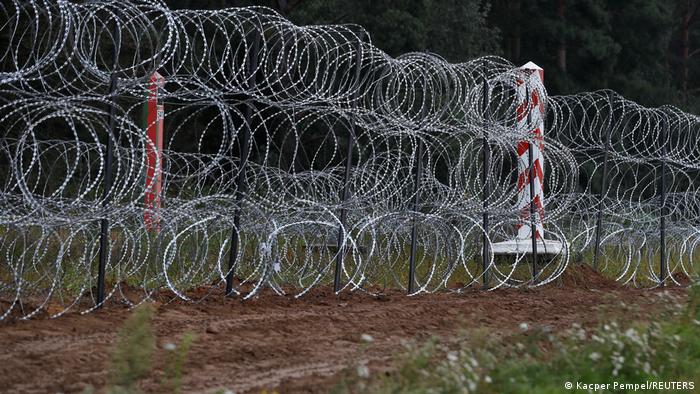 Polish President Andrzej Duda has ordered a state of emergency in parts of two regions bordering Belarus, his spokesman said on Thursday.

The move is unprecedented in Poland's post-communist history. It comes amid heightened tensions between Belarus and its neighbors over a sharp increase in migration.

According to the order signed by Duda — at the request of the government — gatherings of people will be banned on a 3-kilometer-wide strip along the border.

The 30-day state of emergency goes into effect as soon as it is published in Poland's official gazette, Interior Minister Mariusz Kaminski said.

Why is Poland declaring a state of emergency?

In August, some 3,000 migrants tried to enter Poland from Belarus. The Polish government and the European Union have accused Alexander Lukashenko's regime in Minsk of orchestrating unauthorized crossings.

"The situation on the border with Belarus is difficult and dangerous," Duda's spokesperson Blazej Spychalski told a news conference.

"The second reason for bringing in the state of emergency in this area is the military exercises...that will take place on our border," Kaminski said, referring to Russian army drills due on September 10 on Belarusian territory near Poland. "We must be prepared for every scenario."

The government's handling of the situation at Poland's border with Belarus has received sharp criticism from rights groups.

"This state of emergency is a nuclear solution that is to move us away from this border, not only us but also the media, and make sure that no one... will document what is happening there," said Marianna Wartecka of the Fundacja Ocalenie rights group.