Polish police have detained several eco-activists staging a sit-in at Poland's forest management agency, some of whom chained themselves to a gate. They were protesting logging in the UNESCO-protected Bialowieza forest.

A police spokeswoman said on Thursday that police had detained 22 people "for disturbing the peace" at the headquarters of Poland's forest management agency, with police at times using force to remove the up to 50 protestors.

"We're calling for the withdrawal of heavy machinery from the Bialowieza forest. We demand an end to the logging," said Adam Bohdan, one of the activists who chained himself to a security gate inside the agency building.

"All of our activity — peaceful marches, petitions, blockades at the scene — have had no effect. Forest management continues to fell trees despite the decision of the European judiciary. And so we opted for this ultimate form of protest," he told the French news agency AFP.

Many believe the move to open up logging in the Bialowieza forest is a show of strength by the nationalistic Law and Justice (PiS) government, intent on showing the EU, which has accused the government of undermining democracy in the last two years, that it has the power to do what it wishes with its own land.

The activists could face penalties ranging from fines to up to a year behind bars. 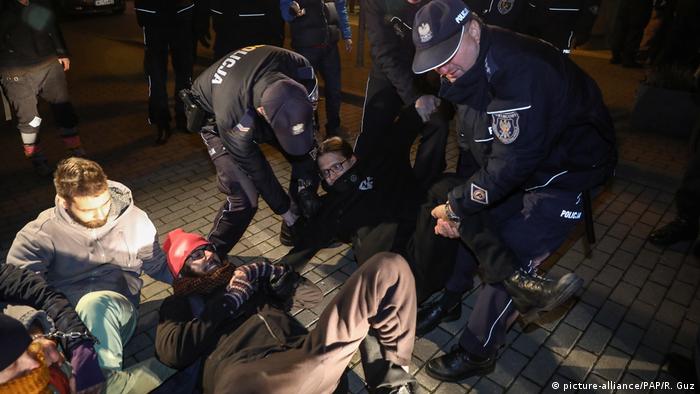 Some of the activists chained themselves to a security gate in the agency's building, saying that their previous efforts 'had no effect'

Scientists, ecologists and the EU have protested the action. Activists have said Warsaw is defying a European Court of Justice injunction to suspend logging in the forest.

The government has been accused by the European Commission of logging trees that are 100 years and older, an act which is illegal under EU law.

Forest patrols by Greenpeace Poland in August found evidence of loggers violating the EU Court's decision in 16 of 30 forest areas.

Bialowieza includes one of the largest surviving parts of a primeval forest that covered most of the European plain about 10,000 years ago. The woodland, which straddles Poland's border with Belarus, is home to unique plant and animal life, including 800 European bison, the continent's largest mammal.

The government began logging in May last year, saying it was clearing dead trees to contain damage caused by a spruce bark beetle infestation. It also justified its move saying it was combatting the risk of forest fires.

In September, the European Commission asked the ECJ to fine Poland for violating a ban on logging in the forest.

In recent weeks, the Polish government has accused the Commission of "spreading lies" and "manipulating the facts."

The Polish Environment Ministry said it was not in violation of an EU order as it is only felling trees for public safety reasons.

Environment Minister Jan Szyszko told a parliamentary hearing in September that logging was only to save the forest from a major beetle outbreak and that it respected EU laws.

He said logging was taking place only in regular parts of the forest, not in the protected national park.

Logging in Poland's primeval Bialowieza forest has continued under the pretext of pest control. Yet environmentalists suspect other motives. The EU says the UNESCO world heritage site is under threat. (05.08.2017)

Bialowieza forest: a Polish treasure gets chopped down

The forest is a World Heritage Site, home to European bison and woodpeckers. Some trees are several centuries old. Still, the Polish government continues to log there (28.09.2017)