Women's advocates welcome the penalties as a strong symbol, but the Polish MEP who uttered the offensive statements says the fine was worth the publicity. 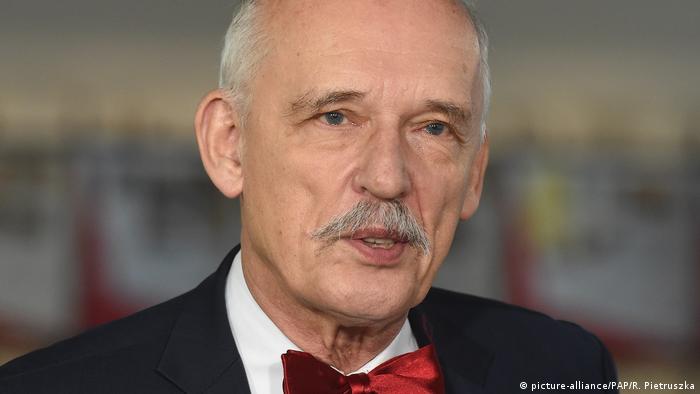 Far-right Polish lawmaker Janusz Korwin-Mikke believes women deserve to be paid less -- now he's getting a bit of a wage gap himself. European Parliament President Antonio Tajani opened Tuesday's session in Strasbourg by declaring he will not "tolerate such behavior" as Korwin-Mikke's speech earlier this month proclaiming women to be "weaker, shorter and less intelligent" than men.

Calling it a "very serious incident", Tajani is imposing sanctions on the Polish MEP that he calls "unprecedented in severity": Korwin-Mikke will lose his per diem for 30 days, a total of 9,180 euros ($9,800), he's suspended from all parliamentary activities for 10 days and he may not "represent the parliament" for a year.

"The severity of punishment is commensurate with the gravity of the offense," Tajani said. "What he said is counter to our values and he did so when a woman was chairing the session and there was a debate going on about the wage gap between men and women. I'm proud to be the president of an institution that does make its voice heard powerfully every day when it comes to the question of women's rights."

Korwin-Mikke been sanctioned three times before, two times fined, for making a Nazi salute in parliament, for using a racial slur referring to poor Europeans and for derogatory comments about immigrants.

European Women's Lobby (EWL) Secretary General Joanna Maycock was pleasantly surprised by the decision. "This is what should happen," she told DW. "This is how a democratic institution like the EP should treat its members when they violate the values of the EU. And let's be clear -- gender equality is a fundamental value of the EU."

Maycock said it was all the more important that such comments do not go unchallenged given the current tense political climate in the world "where racist and misogynist abuse continues to contribute to inequality and human-rights violations."

Her organization, the European Women's Lobby, has already asked for a meeting with newly-elected President Tajani to discuss how he plans to address gender issues during his term. They haven't heard back yet from his office but news of the Korwin-Mikke decision is encouraging that things are going in EWL's preferred direction, Maycock said.

Activists ask for a bigger pay gap for Korwin-Mikke

But sanctions aren't enough for supporters of an online petition to give Korwin-Mikke a permanent pay cut. Social-media activist organization Avaaz started an effort immediately after his tirade to see the lawmaker kicked out.

"We ask the European Parliament to suspend the Polish MEP Janusz Korwin-Mikke following his hateful remarks about women and migrants, and after making a Nazi salute in the chamber," the petition reads. "These acts are in violation of the parliament's rules and betray the values of the entire EU which our parliament is elected to defend."

At the time of his parliamentary punishment, signatures were coming in every couple of seconds, nearing 937,000 out of the goal of one million supporters. Among them is expatriate Polish citizen Aleksandra Lemanik, who lives with her family in Brussels. "I'm offended," she said. "This is not the Europe or the world we want to live in. He is against EU values so should not work for EU institutions."

Korwin-Mikke knew when he made the remarks that he'd likely be sanctioned for it. He told DW in a March 7 interview that this would be a small price to pay for all the attention the incident earned him. "It makes very good public relations in Poland for me if I am punished in European Parliament," he laughed. "I like to be punished. It's very good for me."

His only complaint was that the EP rule that prohibits discriminatory speech is itself discriminatory, saying Voltaire would have wanted him to have the right to express his views whether or not they were agreeable to him.

Joanna Maycock sighs when asked whether the publicity has given women's causes equal benefit. Not really, she explained, as far as donations rolling in to fight this kind of attitude. However, she doesn't rule out that the shock value of the speech will increase EWL's support. "It has been a wakeup call," she said, "for many people who thought we were beyond that."

Most lawmakers are beyond it but the numbers indicate Korwin-Mikke's views may not be unique to him. As his suspension was announced, his EP colleagues approved an annual resolution calling for more efforts to achieve gender equality, just 369 -- 188, with 133 abstentions.

Attitudes to gender equality range from a Polish lawmaker who says women should not vote to the NATO chief who works hard to close the gap. DW's Teri Schultz walked the Brussels divide and spoke to both on Women's Day. (08.03.2017)