Police violence in Latin America 'out of control'

In Latin America, the coronavirus pandemic and police brutality are rife. People are regularly killed during protests or in police custody. Why are security forces so ruthless? 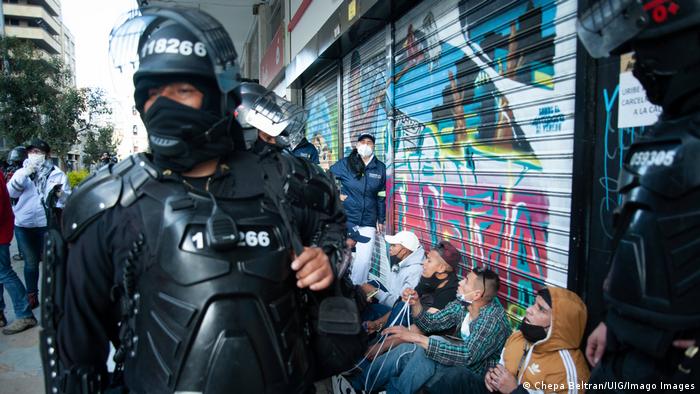 In Chile, there is currently widespread outrage about the case of a young demonstrator who was thrown off a bridge by a police officer at the start of the month. During the mass protests late last year calling for better health care, security forces are reported to have killed more than 30 people. Hundreds of demonstrators also suffered eye injuries because police sometimes fired rubber bullets directly at their faces.

In Colombia, the law student Javier Ordonez died in early September after being beaten by police at the police station. The officers had taken him in because he allegedly drank alcohol on the street, a violation of coronavirus regulations. During the demonstrations against police violence that ensued, 13 civilians were killed, according to media reports. At the end of September, more unrest was triggered after a trans woman was shot by a soldier during a traffic check.

In Mexico, thousands of people took to the streets to protest against police brutality after it became known that a 30-year-old man, Giovanni Lopez, died in police custody after being arrested for not wearing a face mask as legally required. Reported torture methods used by Mexican police are almost as feared as those employed by the drug cartels.

These are just a few examples that are typical of nearly all non-English-speaking countries on the American continent. This summer, all eyes were on US police violence after George Floyd, a Black man, died during his brutal arrest. But in Latin America, the brutality of the security forces has taken on almost unimaginable dimensions. Riot police detain a protester in Bolivia in 2019

"The level of violence and extrajudicial executions is completely out of control in many places," says Fernanda Doz Costa from the human rights organization Amnesty International. This assessment is borne out by a comparison of the number of killings by security officials in each country that is to be found in the free internet encyclopedia Wikipedia. It shows Venezuela and El Salvador to be the countries with the highest percentage of people killed by police; Jamaica and Brazil are also near the top of the list.

But, Doz Costa points out, many countries do not record or pass on these statistics, which makes reliable information on the issue hard to obtain.

The historian Agustina Carrizo de Reimann is doing research on police in Latin America. In her view, their excessive brutality is a structural problem that has gone on for some time, and one that has partly to do with the role security forces played in the authoritarian regimes and dictatorships in place in many Latin American states up into the 1970s, 1980s and 1990s.

Doz Costa also believes there is a connection here. Many police officers still have a similar mindset to back then, and, for the most part, there haven't been any radical reforms, he says. "That can be clearly seen with the carabineros, the Chilean police, for example. They sometimes behave just as they did during the Pinochet dictatorship from 1973 to 1989. In their eyes, demonstrators are a danger to the state, not people whose right to peaceful protest they should be protecting," he says.

In 2019, the ultimate encouragement to take ruthless action did indeed come from the very top. President Pinera called the young people demonstrating for better health care and education "criminals" and a "relentless enemy" that was at war with Chile.

This makes training methods similar, too, says Fernanda Doz Costa. Another big problem connected with this is the legal immunity of security officials. "They are brought before a military tribunal instead of a proper court if accused of crimes. The Inter-American Court of Human Rights has repeatedly pointed out that this is not acceptable," he says.

The non-English speaking part of the American continent is known for having the greatest social inequality and the highest crime rates in the world. According to a ranking by the statistics portal Statista, for example, Latin American cities are by far the most dangerous in international comparison; of the 50 cities with the highest homicide rates, only seven are not from the region.

The high crime rate is often cited in attempts to explain the police's aggression – an explanation that cannot be completely dismissed, as Agustina Carrizo de Reimann of Leipzig University argues: "If you want to understand police violence and also tackle it, you cannot think of it in isolation," she said "It is a mirror of society in terms of violence, political polarization, racism or even corruption."

The result, she argues, has been a vicious circle of more and more violence. When a pickpocket is executed

In addition, people who are only guilty of minor offenses, or even completely innocent, become victims of the "shoot first, ask questions later" approach - including the Chilean demonstrator who was pushed off the bridge mentioned at the beginning, or the Mexican whose arrest ended fatally because he did not wear a mask.

Historian Carrizo, herself an Argentinean, can easily think of other such examples from her home country. She herself has witnessed a policeman shoot a pickpocket on the street. "He simply aimed for the head," she remembers. Overall, she sees the relationship of Argentinians and other Latinos to the police as shattered: "Distrust runs through all strata of the population.

Police violence mostly affects the poor and the minorities - whether they are indigenous people like the Mapuche in Chile and Argentina or black people from Brazil's poor districts, the so-called favelas. In many places, the police do not see themselves as protectors and helpers of the civilian population in general, let alone of these disadvantaged groups.

The problem of police violence in Latin America has been around for decades - and yet the issue has taken on a new urgency in the wake of the Black Lives Matter protests in the US and recent scandals in the countries themselves. According to Fernanda Doz Costa, the coronavirus crisis has also contributed to the fact that "we have a historic opportunity to reform the police force."

The pandemic has acted like a magnifying glass for Latin America, showing how serious the problems of social inequality and police violence are - more than ever before it has become clear that a police force is needed that works for everyone. "We need a police force that respects human rights, not one that makes us fear that our children will not come back alive from a protest action," says Doz Costa.

The reform of the security agencies must include, she suggests, other recruitment and training measures, better pay and an end to impunity. So far, the political will for such far-reaching changes has been lacking in most countries. But "if they want to remain stable in the long term, they have no other choice," says Doz Costa. Otherwise, the spiral of violence will continue to spiral upwards, and social unrest will become ever greater. "We have seen with the recent protests in the different countries: The more excessively the police acted against the people, the more it fired up the demonstrations."

The coronavirus crisis and simmering discontent over inequality and a neoliberal economic model has brought Chile to the brink of a major political crisis. Can President Sebastian Pinera's conservative coalition survive?