Overnight in the northern German city of Hildesheim, police raided a mosque and flats belonging to people close to it. To the south, investigators want to know where a 15-year-old procured multiple weapons. 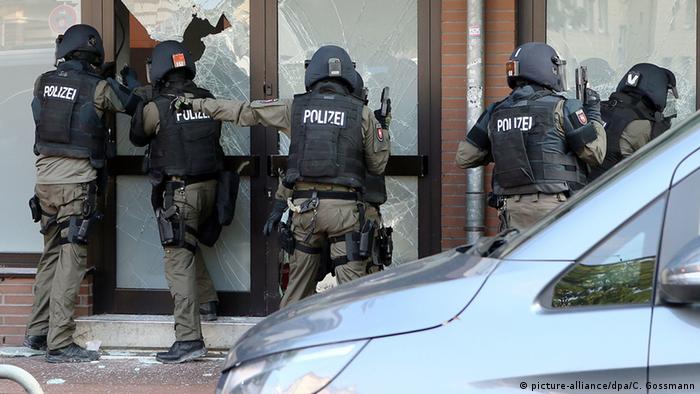 "The DIK in Hildesheim is a national hot-spot for the radical Salafist scene," Lower Saxony's state interior minister, Boris Pistorius, said in a statement. "After months of preparation, with these raids today, we have taken an important step towards banning the group."

In the south-west, investigators have arrested a 15-year-old who they believed to have been planning a mass-shooting similar to the July 22 attack in Munich.

The suspect had been in contact online with the Munich shooter, a German-Iranian citizen who committed suicide during his attack on Friday. Police found "a large number of small-caliber weapons, several knives and daggers" in the Ludwigsburg suspect's possession. Police had said they suspected him of planning a shooting spree at his school, but on Thursday, they rowed back from this somewhat.

"The shooting spree issue is ruled out," a police spokesman said. "Now we're concentrating on finding out more details."

Reportedly, the suspect distanced himself from any shooting plans some time ago, and yet police were careful not to dismiss the theory entirely. "One must still presume a serious threatening situation," the police spokesman said.

Back to the north in Hildesheim, state minister Pistorius said that security services had indications that members of the group were being radicalized and that some were being motivated to travel to warzones to fight jihadi causes. Multiple visitors to the mosque had traveled on to Iraq or Syria, some of them to fight for the so-called "Islamic State" (IS), according to the investigators' findings.

Pistorius also said that speakers at the mosque would incite "hate against unbelievers."

Bavaria police: 'No explosion' in Zirndorf

Conflicting reports have emerged concerning an explosion in the Bavarian town of Zirndorf near Nuremberg. Bavarian police said there has been "no explosion." (27.07.2016)

Bavaria's top security official has revealed new details of a bombing in the German town of Ansbach. In the wake of several attacks on German soil, officials have considered deploying the military in country. (27.07.2016)

Prayer and fasting to cope with hatred and terror. Catholics worldwide are grieving for the 85-year-old priest who was murdered in France. DW's Christoph Strack believes there are many masterminds behind such attacks. (27.07.2016)

"We will not accept Salafist groups and their backers ignoring our rules, even putting our constitutional order in question, while wanting to convince young people to join the self-proclaimed IS. We will fight that with all the legal means at our disposal," Pistorius said.

The raids were concluded late on Wednesday night, according to a police spokesman. The operation was led by Göttingen's police precinct to the south of Hildesheim.

The mosque and the organization running it had been on investigators' radars for some time. The head of the state's criminal investigative police (the Landeskriminalamt), Uwe Kolmey, discussed suspicions about the DIK Hildesheim with local broadcaster MDR1 in June.

"Hildesheim is certainly a Salafist hub in Lower Saxony," he said. "We repeatedly note that there exists a danger of radicalization - particularly in mosque groups in which Salafist preachers operate. One such place is surely the DIK Hildesheim."

Germany has been on high alert in recent days, after a string of attacks and shootings involving people of Muslim backgrounds in several Bavarian cities and Berlin. Some appear not to have been Islamist in motivation at the early stages of investigation, while two of the perpetrators appear to have had links to IS, if not perhaps direct contact with the group.

Hildesheim is located to the south of Hanover in central Germany. It's home to almost 100,000 people.