A man brandishing a knife inside Berlin Cathedral has been shot and wounded by police. A second police officer was wounded in the crossfire. The area remains cordoned off.

A German police officer shot and wounded a knife-wielding man inside Berlin Cathedral on Sunday after staff called the emergency services.

Footage posted online showed armed police officers cordoning off the area around the cathedral — one of Berlin's most popular tourist attractions — with two ambulances parked at the entrance. Witnesses said that armed officers were patrolling the area.

Police later said they had shot at a man "rampaging" in the church, injuring him in the leg. They described the suspect as a "hooligan," who was "acting aggressively."

Berlin police spokesman Winfrid Wenzel said there was no reason to suspect the knife-wielding man's actions were linked to terrorism.

"Based on what we know so far, we have no information that the suspect in any way had a terrorist or Islamist motive," Wenzel said.

Police went on to disclose that the suspect was a 53-year-old Austrian man. He was taken to a local hospital to undergo surgery after being shot by police in the leg. 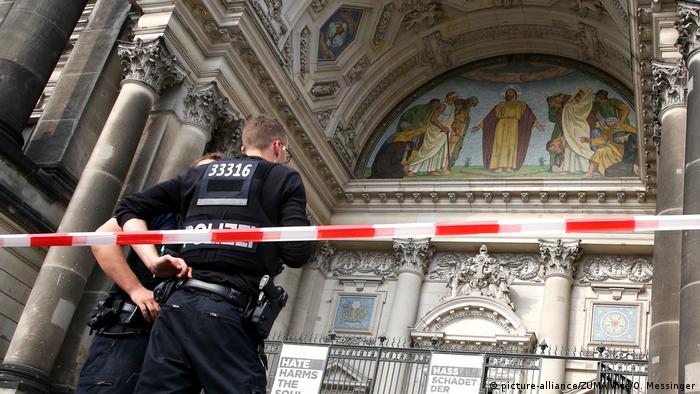 Berlin Cathedral is set to remain cordoned off until Monday

Officer injured in the crossfire

Two police officers responding to the call repeatedly asked the suspect to put down the knife but no avail. The officers then tried to use a chemical spray to disarm the man, but that also proved ineffective, leading one of the officers to open fire and wound the suspect.

The second officer was inadvertently wounded by the ricocheting bullet from his colleague. He was taken to hospital, where he was treated for minor injuries before being released.

Germany's landmarks a target for extremists

The cathedral, or Dom, lies in central Berlin on the city's famous Museum Island, an area typically crowded with tourists and visitors. About 100 people were in the Dom at the time of the incident and were safely escorted outside by staff.

Germany, like several other European nations, remains a top target for Islamist militant groups, particularly because of its involvement in the coalition fighting against the so-called "Islamic State" jihadi group in Syria and Iraq, as well as its deployment of Bundeswehr troops in Afghanistan since 2001.

The country's worst terror incident to date saw Tunisian asylum seeker Anis Amri ram a truck into a crowd at a Berlin Christmas market in December 2016, killing 12 and wounding around 50 others.