Police have arrested a total of seven people with alleged ties to the man who drove a truck into a crowd in Nice. A man and a woman in Nice were the latest to be detained. 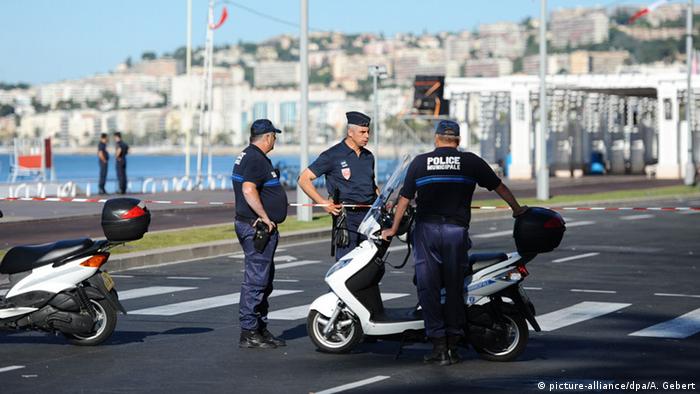 Seven people have been arrested in connection with the Bastille Day attack which killed at least 84 people when a truck drove into a crowd in Nice, according to the Paris prosecutor's office.

A man and a woman were arrested Sunday morning in connection with the truck attack. That brings the total in custody to seven as police continue to investigate the fatal, truck-ramming attack.

French news agency AFP previously reported that four men with possible ties to the Tunisian driver who committed the attack were detained, citing a judicial source. One of the men was arrested on Friday, while three others were taken in by police early Saturday.

The estranged wife of the driver is among those being detained.

Investigators are still trying to determine a motive after 31-year-old Mohamed Lahouaiej-Bouhlel drove a large truck into a crowd on Thursday night in the city on the French Riviera.

On Saturday morning, the militant "Islamic State" (IS) group claimed responsibility for the attack via one of its social media outlets. An IS-published statement said one of its "soldiers" had "carried out the operation in response to calls to target the citizens of coalition countries fighting the Islamic State" in Syria and Iraq.

The statement, however, did not name the attacker. The language also implied that the suspect may have acted independently.

French authorities have yet to produce evidence that Bouhlel had turned to radical Islam. Interior Minister Bernard Cazeneuve said he may have undergone a rapid change. Prime Minister Manuel Valls blamed the attack on "radical Islam," while other French officials cautioned that it was too soon to tell.

Bouhlel was known to police for domestic violence and petty crime but had no known connections to terrorist groups. His father told AFP that Bouhlel suffered from depression and breakdowns in his youth where he "broke and demolished everything."

Bouhlel's father insisted that his son was not religious, telling AFP: "He didn't pray, he drank alcohol, and even took drugs."

Defense and intelligence leaders met with President Francois Holland in Paris on Saturday to discuss the third mass-casualty attack to hit France in the last 18 months.

Hollande called the security cabinet meeting to discuss defense measures, ahead of a minute of silence at midday.

Meanwhile in Nice, the seaside boulevard that was scene of the brutal attack reopened to traffic on Saturday as makeshift memorials were set up near one end of the avenue.

At least 10 children and teenagers were killed during the attack, including two German students. An additional 50 children were injured - some are listed in critical condition, according to hospital officials.

The attack also injured a total of 202 people and occurred following a fireworks display on Bastille Day.

France is observing three days of national mourning in honor of the victims.

White truck plowed through crowd in attack in Nice

The world reacts to the attacks in Nice

Mourning, but life continues in Nice