Thousands of protesters took to the streets in Poland to oppose planned legislation that would allow the government to impose control over the judiciary. The controversial law could affect Poland's EU membership. 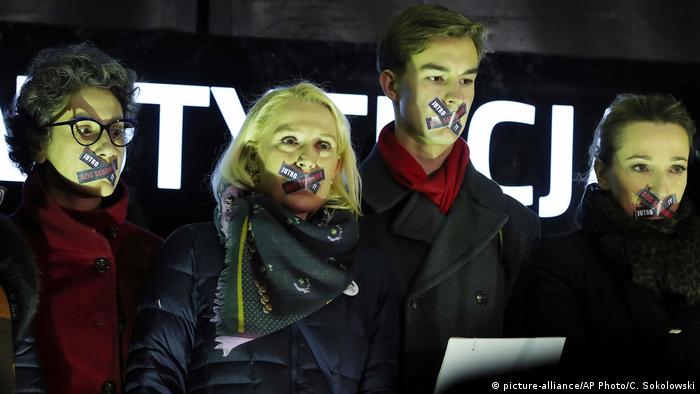 Thousands of protesters gathered in large numbers across Poland on Wednesday evening to denounce proposed new laws that would give the government the power to fire and control judges.

Protesters are concerned that the ruling right-wing populist Law and Justice party is attempting to force an end to the separation of powers.

People chanted "Free courts!" in front of the parliament in Warsaw as well as in front of courthouses across the country, in 160 different locations.

Read more: Poland votes: PiS and its pact with the people

There are also concerns that the legislation would alienate Poland from the European Union and could even lead to a forced departure from the bloc.

"We are here because the foundations of our country's system are under threat,'' said Dariusz Korneluk, a prosecutor.

The Supreme Court of Poland said the plans were an attempt to force judges to apply all regulations imposed by the government even if they were "incompatible with higher legal norms." This would be a breach of EU rules.

"Today is a difficult day. Once again the fate of free courts hangs in the balance,'' Igor Tuleya, a judge who has been critical of the government, told a crowd in Warsaw.

"We live at a time where they don't only drag us through the mud and gag us, but also ... try to put us in jail," he added. 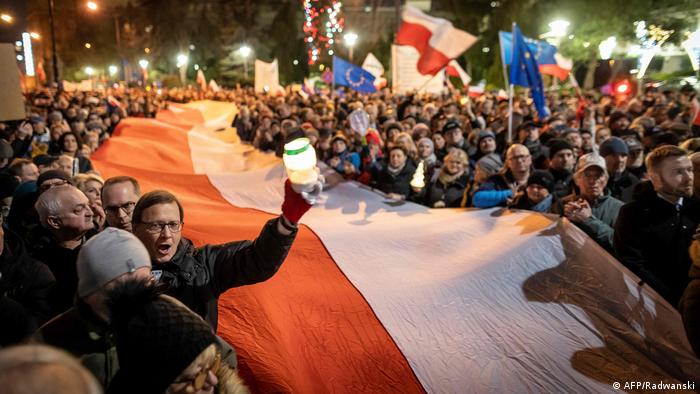 What would the new law mean?

Judges would also be forced to declare associations with which they are affiliated and — more specifically — all names that these organizations can be found under online.

The proposals also suggest judges could be removed for taking part in "activities of a political nature" or acting in a way that could "harm the functioning of the justice system".

"With this law, the Polish authorities are attempting to remove what little remains of judicial independence in Poland," Amnesty International said. Comparisons have been drawn with this legislation and the repressive communist regime that ruled Poland in the 1980s.

Read more: Poland: Recounting votes to get the right result?

The government has defended the proposed law. Prime Minister Mateusz Morawiecki said the changes are aimed at preventing "chaos.''

"No serious state can allow some judges to question the ability to make appointments or the sentences and decisions made by other judges,'' Morawiecki said on Tuesday.

The Law and Justice party has been in power since 2015 and was recently re-elected. Over the course of the last four years they have taken over the Constitutional Tribunal, the public prosecution system. The EU blocked key measures that would have given them control of the Supreme Court too.