Poland: Stalemate in the standoff

Pressure is rising on the Polish government and opposition to reach an agreement. Proposals to limit press access to parliament, along with a budget row, sparked a standoff last week. Gerhard Gnauck reports from Warsaw. 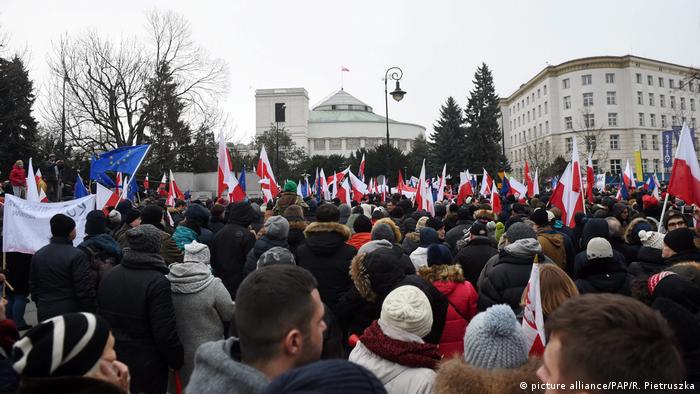 Marcin Swiecicki is seeing his city in a new light. Speaking over the phone, the former mayor of Warsaw describes his situation. "We're sitting here in the plenary chamber in the half-dark," he says. "It's a bit chilly; some people are sitting here in their coats, but I haven't seen any sleeping bags yet."

Opinion: Poland's government at a crossroads

The events of Friday night at the Polish Sejm do not bode well. It's the first time a popular demonstration has escalated in this way. The government needs to wake up, says DW's Rosalia Romaniec. (19.12.2016)

Muslims and Africans are the most frequent targets of racially motivated attacks. Anti-German sentiment is also playing a role. (17.12.2016)

Swiecicki is one of the members of parliament representing Poland's two liberal opposition parties, which have been holding a kind of sit-in in the parliament building since late Friday night. Their action is in response to attempts by the governing national-conservative Law and Justice Party (PiS) to restrict journalists' access to parliament. Matters escalated after PiS representatives walked out of the plenary chamber following an argument on Friday, then approved the 2017 national budget on their own in an adjoining room. That night, opposition demonstrators blocked access to parliament for several hours. The atmosphere in Poland has been extremely tense ever since.

Swiecicki takes the call from DW just as he's about to start his six-hour "shift" in the plenary chamber. "We're in contact with the outside world via smartphones and the internet," he says. For weeks now, government-friendly media have been warning that the opposition might orchestrate a "maidan," a reference to events in Kyiv, Ukraine, two years ago. "They claim we're preparing tires to erect burning barricades," says Swiecicki. "It's utter nonsense. We're sitting here, more than 20 opposition members of parliament. It's all quite peaceful: there's complete silence in the building. The parliamentary guards let us go in and out, but at the same time they have told us it's illegal to stay in the plenary chamber when parliament's not in session."

There's no clear sense, either inside or outside the parliament, of how the crisis will resolve itself. However, the government camp is clearly more inclined to concede to the media than to the opposition. On Monday, the Marshal of the Senate, Stanislaw Karczewski, said in a second round of discussions with journalists that, for the upper house, the current access rules would remain the same for the time being. He did not, however, state whether this would also apply in the lower house of parliament. He said he wanted to work up some new suggestions by January 6 and discuss them with the media then. 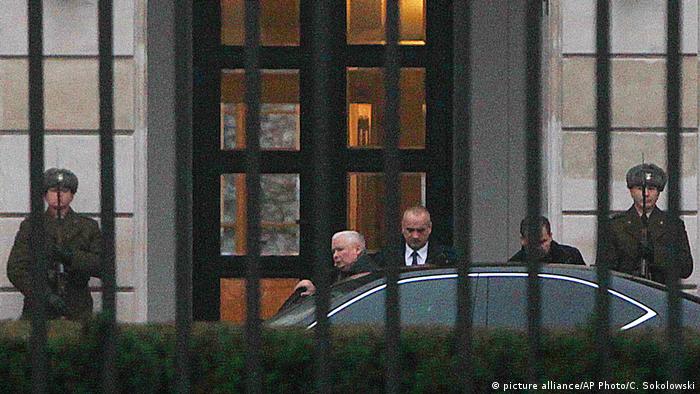 Chairman of the ruling Law and Justice Party Jaroslaw Kaczynski

On Monday the positions of the government on the one hand and the opposition on the other remained entrenched, both in and outside of parliament. The Polish president, Andrzej Duda, met opposition leaders PiS leader Jaroslaw Kaczynski and Prime Minister Beata Szydlo in an attempt to mediate, but by the evening it was still unclear how the situation could be resolved.

The state television channel TVP described demonstrations, blockades and a sit-in in parliament as "an attempt to destabilize the state," practically branding them as an attempted coup. Furthermore, the PiS parliamentary group leader decided to construe the fact that the conflict had broken out during the budget debate as an attempt to torpedo the approval of funds for the new child allowance - a very popular measure among the people.

The government has been backed by the biggest union in the country, Solidarnosc, which is predominantly PiS-friendly. Its chairman, Piotr Duda - well-known for his blunt manner - warned the opposition on television that "if the other side wants to lock horns in the streets, we will lock horns," adding that preparations were being made to "take to the streets."

So far, the Catholic Church in Poland has refrained from commenting on the controversy - apart from the outgoing Archbishop of Krakow, Stanislaw Kardinal Dziwisz, who said on Monday: "The situation is very distressing. After 25 years we've gone back to fighting again." That was very sad, he said, especially just before Christmas. This was a time for making Christmas wishes: "Peace to people of goodwill. If all sides show goodwill, peace will come. That's what we're praying for." 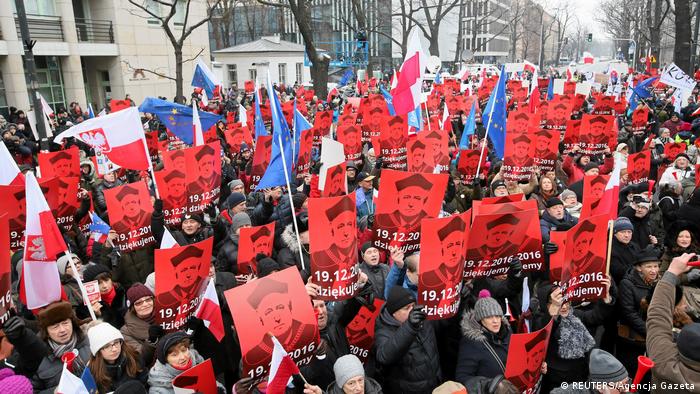 Protests hold images of Andrzej Rzeplinski, head of Poland's Constitutional Court, during a demonstration against the Polish government

Parliamentary majority hangs in the balance

By now, though, it's become clear that there is also growing discontent within the PiS itself. Kazimierz Ujazdowski, a PiS member of the European parliament, believes the responsibility for the crisis lies "with the coalition, or to be more precise, with Jaroslaw Kaczynski and the PiS leadership." He doesn't even rule out leaving the party: "I can't see myself being in this party if it continues to pursue the course of escalating the conflict, which contradicts our promises to the voters," Ujazdowski said on Monday on the commercial television channel TVN24.

The PiS has frightened off many of its prominent politicians in the past. But if Ujazdowski were to leave, he would be the first to do so since the party won the election a year ago. As the tabloid paper Fakt reports, PiS representatives in the parliament in Warsaw are also becoming restive. In two - relatively unimportant - recent votes, as many as 30 of the 234 PiS representatives voted against the party line. If just four of them were to change sides, the PiS would lose its parliamentary majority.