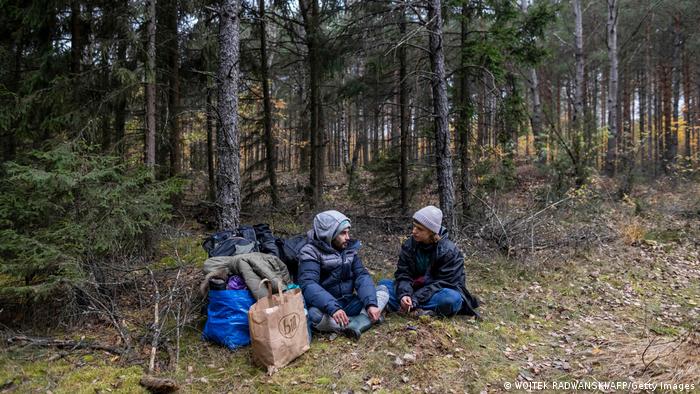 Activists have argued that the forest that borders Poland and Belarus is too cold and unsafe, especially for children

Two Polish soldiers have suffered minor injuries, officials said Monday, after about 60 people tried to push their way across the country's border with Belarus. The scuffle occurred the night before, near the village of Usnarz Gorny.

A video was published on Poland's border guards website that showed men trying to break a razor wire fence with branches. Officers said they were then attacked with branches and stones. A similar scuffle occurred on Saturday.

Poland already has about 6,000 troops on the border, and will increase that number to 10,000, the Defense Ministry announced later on Monday.

Why is there a new border influx via Belarus?

Lithuania, Latvia and Poland, the EU countries that neighbor Belarus, are facing increasing pressure. The Belarusian government has maintained its policy of picking up migrants and refugees and dropping them off at the borders in an effort to encourage them out of the country.

European leaders believe this policy has been implemented in retaliation for sanctions against Belarus' strongman President Alexander Lukaschenko.

Polish state news agency PAP reported that the Defense Ministry has been in contact with Europe's border patrol agency, Frontex, to see if it can arrange flights for the refugees back to their home countries. They mostly hail from Iraq, Iran and Syria.

As the cold sets and and a few refugees have died under mysterious circumstances, activists have been seeking more transparency from Polish officials about what is going on at the border.

On Saturday, a group of women — including two of Poland's former first ladies, Jolanta Kwasniewska and Anna Komorowska —  protested near the border against pushing the people, including many children, into the forest back toward Belarus.

Despite the strong military presence on the border, thousands have entered Poland in the past two months. Poland's security officials have said that migrants and refugees can pay up to $12,000 (about €10,000) in their home countries to people promising to get them to the EU, preferably to Germany.

Germany has seen some 4,200 new arrivals in October alone, according to federal police.