Podolski delivers his own fitting departure

By the time Lukas Podolski played his last match for Germany, it had long since been clear that he was past his best as a player. However, Joachim Löw and the national team may come to miss him more than they think. 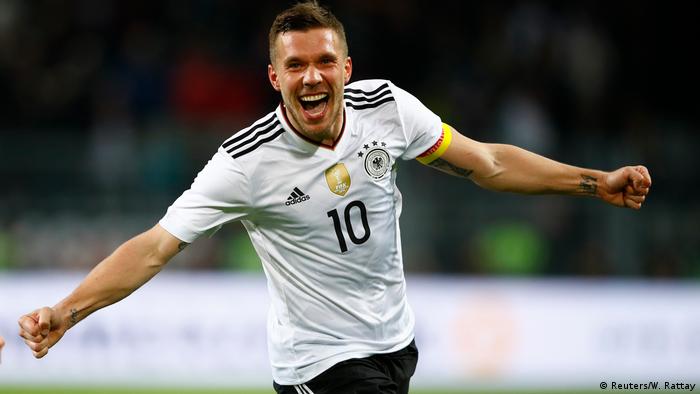 It was worth waiting 70 minutes for. It was worth waiting through a poorly timed speech from German football association (DFB) President Reinhard Grindel. It was worth watching a first half of tepid football with little evidence of why a game was even necessary to say goodbye. It was worth it all for that one moment when Lukas Podolski scored a goal harking back to the golden moments of his career. It was a goal that deserved to win any game, but fittingly it won his last one in a Germany shirt.

With a slap of the badge on his chest and a parting wave, Podolski departed with six minutes to go. The stadium had waited for this moment, but was still reeling from the fairytale goal that Podolski had just scored. It wasn't until Podolski took selfies with the crowd, climbed into the stands to sing with the fans and was thrown in the air by his teammates that it might have dawned on Germany what they have lost.

In this month's edition of German football magazine "11 Freunde," Podolski said: "From 80 million people, 22 or 23 are called up for an international friendly. If I am one of them, am I supposed to complain?"

The 31-year-old has never lost touch with his roots, he has never changed his relaxed, friendly, humorous manner. It's what made him so rare in modern football, and what him indispensible to the balance of Germany's squad.

It has been clear for a while that on the pitch, he won't actually be missed and tonight was, for the most part, more damming evidence. Before the goal, Podolski looked slow and was snatching at his chances. The crowd was anxious, and it didn't feel like the departure Podolski deserved. However, as things so often tend to go in sports, the fairytale ending was yet to come.

"You couldn't have written it better in a script," Julian Weigl told DW afterwards. Not even Podolski - a man famous for delivering some great lines over the years - could have imagined such a finish. "It's difficult to describe. You have to experience it," Podolski said.

The game itself was something many felt they could have been spared. The Podolski goal and standing ovation for his departure would have sufficed. An impressive choreography, an indifferent performance and far too many Mexican waves were familiar but unnecessary additions to this Germany game.

England should have won and spoiled the party, but Marc-André ter Stegen delivered a timely performance between the posts for the national team. Jonas Hector will be hoping his performance is quickly forgotten, whereas Mats Hummels was at his commanding best.

"You could see that the processes weren't there and that the young lads, myself included, wanted to impress," Weigl said. Timo Werner certainly did that on his debut, but was perhaps a little overly eager to do well.

"As a person, we will definitely miss him, but I think we have a lot of good and experienced players who can replace him,” Leroy Sané said. Weigl echoed these sentiments, saying this young side didn't need to hide and was ready to take up the mantle as the old guard stepped down.

Behind the tweets, the smiles, and the emotion of the evening also lies a hard truth for Germany. The absence of Lukas Podolski unbalances the Germany squad. Thomas Müller might well take up his mantle, but never has there been a Germany player capable of making humor and ease such a pivotal part of a team's winning formula.

"You idiots," was Podolski's initial reaction when he was asked how he felt about being in the mixed zone with all of the national team reporters one last time. He smiled and followed it up with heartfelt thanks for all the media's work during his years in a Germany shirt. It was one last reminder of his unique character - a Cologne boy but a Germany man, who will be missed by the national team more than they yet know.

Coach Löw hails Podolski as one of Germany's greatest

Lukas Podolski was full of his usual charm at his final press conference on international duty ahead of Germany’s friendly against England. The striker will captain the national side on his 130th and last appearance. (21.03.2017)