A new ad campaign in Germany's northwestern region of East Frisia is baring it all to get young people speaking their native Platt or Low-German. The posters are so popular that they keep disappearing. 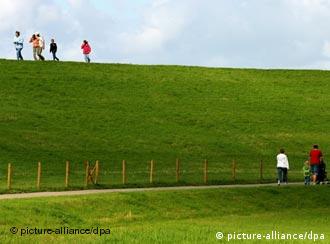 Dam, boring dam: Ad campaigners are trying to break with this image of East Frisia

Sand, blue skies, brown-skinned backsides -- looks like a summer-in-the-sun vacation package. But "Maakt in Oostfreesland" isn't a tourist ad for Germany's northwestern, island-studded region. The campaign is aimed at youngsters "Made in East Frisia" to spark pride in their native language, the Low-German dialect called Plattdeutsch. According to the organization Oostfreeske Taal, only around 20 to 25 percent of young East Frisians speak Low-German these days -- about 50 percent still understand the language. The initiative "Made in East Frisia" wants that to change.

East Frisians are best known around Germany for the jokes made at their expense. These portray East Frisians as mumbling country-bumpkins -- Germany's greatest, next to their southern cousins, the Bavarians. Perhaps it is because there are no big cities in the region, perhaps because until recently, the population consisted mostly of fishermen and farmers. Another reason could be that when East Frisians speak their language, Low-German, no one else in Germany can understand them.

Oostfreeske Tal has tried for over 15 years to raise the image of the East Frisian Low German, a language closely related to Dutch. Speaking dialect, it says, isn't just good for regional tradition. The organization focuses on modern, hipper aspects, like the benefits of bilingualism -- speaking two foreign languages -- as a cognitive boost for kids. Those who grow up speaking East Frisian and High German are not backwards, it argues, but better equipped for a multi-lingual future -- and qualified to get jobs in big cities far away from home. Show your pride in your heritage, the poster campaign reads. With your language. 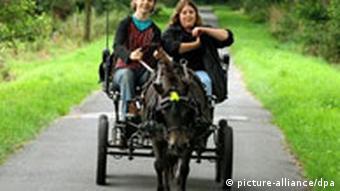 Old-fashioned East Frisia is not up for grabs

But while the beaches and meadows are surely nice, it is the posters of tattooed bare booties that have caught the public eye. They are being torn off school and university walls almost as soon as they go up, say the designers of "Maakt in Oostfreesland." If nothing else, a sure sign that the target audience thinks the campaign is cool.

For those not close enough to get a good look, the campaign "Made in East Frisia" offers the tattoos on their Web site as mobile phone logos, along with a series of language downloads. Save HeHarrijasses! as a cry of despair to the Almighty or the apathetic greeting Koom rin, kannst rut kieken -- "Come on in, then you can look out."

Or, if you want to get really East Frisian, check out the saying Wenn Du en Ei eten wullt, must Du eerst in d’ Höhnerstall gahn. Liberally translated it means that if you want something done, you have to do it yourself. However, it may also a reminder of the language's rural roots. Literally speaking, it states that if you want to eat an egg, you first have to go to the chicken coop.

A new breeze is blowing for environmentally friendly wind energy, as industrial global players -- including German firms -- step in to help expand the market for the renewable resource. (April 11, 2005)

Munich has Oktoberfest. Cologne has Carnival. And Helgoland, a German island in the North Sea has a fun-free zone for grumps wishing to escape winter festivities.(Nov. 13, 2004)