Pianist Chilly Gonzales on ′the respect of other musicians′ | Culture| Arts, music and lifestyle reporting from Germany | DW | 20.11.2019

Pianist Chilly Gonzales on 'the respect of other musicians'

On November 22, the International Music Award ceremony will be held in Berlin. Pianist and entertainer Chilly Gonzales is one of its jurors. He spoke with DW about prizes and his way of supporting fellow musicians.

Canadian musician Chilly Gonzales knows the music business inside and out. He releases music on his own label, has collaborated with musicians like Feist, Daft Punk and Drake and also co-produced a host of songs and albums. He has had a successful career in Canada, France and Germany. In 2018, he even started a music academy, the Gonzervatory in Cologne.

The International Music Awards (IMA) are the successor to the German music prize, Echo, which from 1992 to 2018 was given to the best-selling artists in Germany. The Echo awards ended their run in scandal after an anti-Semitism controversy last year.

For the new awards, instead of focusing only on sales, the IMA's organizers want to distribute the prizes in a variety of categories. Aside from honoring the most unique sounds of today and tomorrow, categories also touch on musical engagement and attitude. DW spoke with Gonzales, one of the IMA's jurors, about the awards and music in general.

Mr. Gonzales, how important or unimportant do you think music prizes are?

If you win them, they are really exciting, and they are one of the signs of your impact on the world. It's like a concentrated version of what you feel when you get a review in a newspaper that is positive. 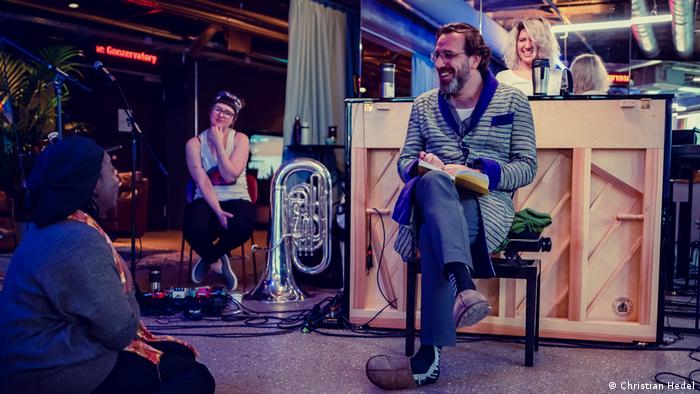 Gonzales and some of the students at his "Gonzervatory" in Cologne.

The Echo awards were only about sales. Now you have a prize that seems to be more about quality…

Well, quality is subjective, therefore it cannot possibly be only about quality. It's about industry consensus, which is what the Grammys are as well. Your choices are based on good reviews, sales or industry consensus. You can't have industry consensus without a little feeling of "Well, this was a big seller, we can't ignore it." But it doesn't have to necessarily mean that you give the prize to the people who sold the most because they happen to be anti-Semites, and then you get in trouble and have to change your entire system. You get pinned into a corner if you only go by sales.

During your career, you have won music prizes, such as a Grammy for a collaboration on Daft Punk's album Random Access Memories. In what way did that affect your musical career?

I didn't win a prize. Daft Punk won a prize that I was part of. I don't consider that my prize at all, because Daft Punk would have won it with or without me, and so I only consider prizes when they're for my own albums or own concerts or in my own name.

So this year, I was nominated for a Preis für Popkultur (Pop Culture Prize) in Germany, and for an honorary fellowship from the Royal Conservatory of Music in Toronto. I was also nominated in 2011 for a Juno Award, which is the Canadian Grammy, for my album Ivory Tower. But my piano albums were never nominated for any kind of recording prize in Canada, England, Germany and France. And that was always a little disappointing to me. But you get over it pretty quickly. I mean it's not the be-all and end-all. I think when you don't get it, you don't let it get you down, and you take that negative energy and channel it in a positive way.

What kind of recognition is the one that gives you the most satisfaction personally?

The respect of other musicians.

Trying to make a living as a professional musician is tough. In your opinion, what can help a young musician today to keep going?

If they enjoy performing live, then they should focus their energy on that. The Gonzervatory is very much a performance-based institution for this reason, because it gets people closer to the spiritual sense of music, which I believe is performance. And also in a pragmatic sense, it gives them the tools to be able to make money and have a career.

The reason I am able to have my own label and have full control and have a team of more than just a couple of people helping me out is because I'm able to do concerts that sell out consistently in the places where I work the most often. And that enables me to have enough of a financial base to do the projects I want to do and to be picky and to say no to all the other things that I actually don't enjoy doing. I can focus on what I enjoy the most, what people like about me the most, and it happens to be the thing that pays the most, which is live performance. Gonzales studied music, but learned much more while performing on stage.

In a way, the beginning of your career coincided with the early days of home recording. If you were a young musician now, would you concentrate more on the live shows and record less tucked away in your bedroom?

I would say sit in your bedroom, but when you're recording and when you're composing pieces, think of how you would perform it live. So already put yourself in your imagination on the concert stage. And that way, the piece itself will be more communicative. Because when you are in the mindset of performing, even if you are not actually on stage but just dreaming about it, you will change how you will compose; you will change how the piece feels. Because you have a kind of audience in your imagination, and this means when it comes time to perform, there will be a harmony between the recorded version and what you do live, and that has a strength to it.

When you record and have the illusion of total freedom, because you're in your bedroom, and there is not really any pressure on you, you can fall into a trap of over-perfectionism or in a way composing with the wrong audience in mind. And that can create problems later. Again, not to plug my Gonzervatory this whole interview, but that's why I put them right under pressure. And that's why they perform the pieces ten minutes after they have written them. It's to fuse this process, to erase the line between the illusion of freedom when you're composing in your bedroom and the illusion of losing control when you are on stage. It doesn't have to feel that way.

Gonzales: Authenticity in music 'is impossible'

His eclectic and experimental approach to music made Canadian pianist Chilly Gonzales a star. That sensibility is reflected in his new "Re-Introduction Etudes," a novel form of lesson book for piano learners. (12.06.2014)