Acclaimed photojournalist Harald Hauswald has released a new book of rare color images portraying daily life in the GDR. He speaks with DW about working against the regime and smuggling images beyond the Berlin Wall. 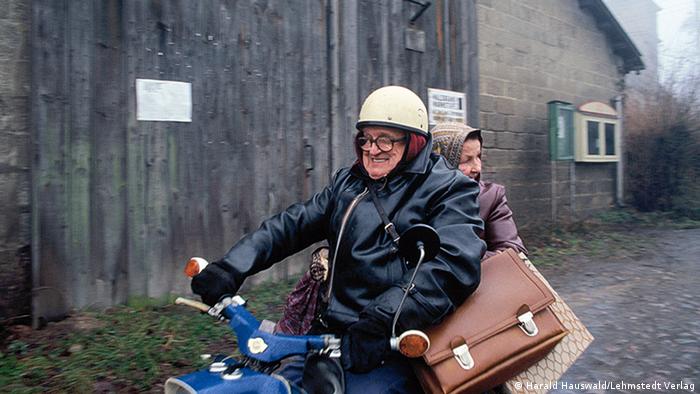 DW: Your latest book "Distant East. The Final Years of the GDR" provides an unusually intimate insight into life in the former East Germany. How did you go about selecting images for the book?

Harald Hauswald: Actually, I just picked the ones I liked! (Laughs). The government was terrible but the people were great.

When did you first start taking pictures?

I studied photography in Dresden in 1976 and moved to Berlin in 1978, kind of overnight because of a woman! I was working as a telegram delivery guy in Prenzlauer Berg because I couldn't find any work as a photographer. I always had my camera with me on my rounds and that's when I began to document life in the city. 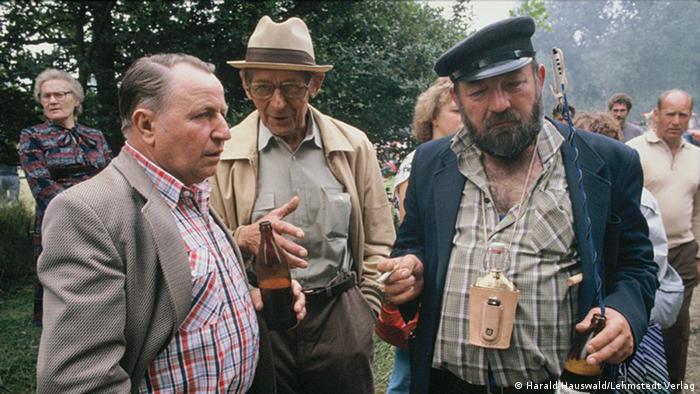 You didn't really photograph political figures, regime officials or intellectuals, rather ordinary people instead. Why was that?

Well, it's something that continues to motivate my work even now. I like taking to the streets, going to local hangouts or to public events, and the camera is a way for me to get to know people. It's a kind of interplay between the act of photographing, my innate curiosity and the desire to capture the world for myself.

You worked illegally for Western media outlets in the GDR period. How did that function?

I took a lot of photos that I couldn't publish in the GDR because of strict state censorship. I did three reportages for GEO magazine and I wanted to reach a wider audience. It worked, because there were Western journalists based in East Berlin and they had passes enabling them to transport material over the border without any controls. People like Peter Pragal, then a correspondent at Stern magazine, transported my work. 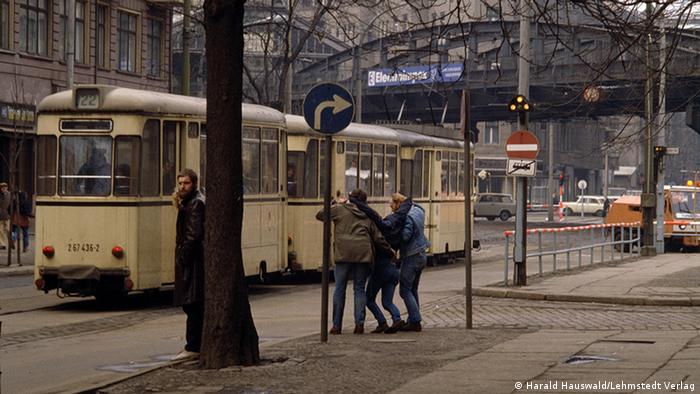 Yes, I got it from GEO because the quality of color film in East Germany was too bad. I got them developed at Berliner Verlag on Alexanderplatz which was the only processing lab that handled Western film because Erich Honecker was photographed by state photographers who used Western film. That's why there was this processing lab. I had a permit to use the lab and so I developed my films there and then sent the negatives over the border with the West German journalists.

You were closely monitored by the Stasi, the East German secret police, for many years. How did you handle the limitations imposed by the political situation? What was your relationship like to the regime?

I was an opponent of the regime. I felt trapped in the country. To know that you could never cross the border, that for me the world ended at the Brandenburg Gate - I found that quite depressing. Photography was a way for me to express my opposition. I wanted to expose the truth. In the official media everything was sugar-coated. And you know, in Prenzlauer Berg I saw how many apartment blocks were dilapidated, that there was no money left for Prenzlauer Berg and they wanted to demolish entire streets of period houses. There was a contradiction between what was being reported and what was actually going on and it was that contrast that moved me to take pictures. 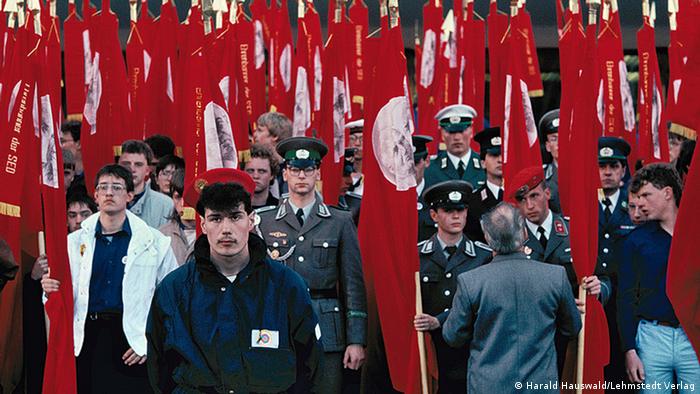 The great British photojournalist Don McCullin has said that there is far too much control on photographers now from governments, picture agencies and editors, that he could never take the types of photographs he took in Vietnam, for example, today. Do you share that opinion?

I feel really sad for my colleagues, for professional photojournalists working today. I took pictures of a world that no longer exists and nobody can do that now - that world is gone. I felt harassed by the regime, but I had a lot of fun with people. People were actually very open among themselves and relied on and helped one another. Today's sharp-elbowed society, the ruthless pursuit of money - it wasn't like that then. But one shouldn't forget that it was an artificial world. It was walled in, a completely artificial situation.

In the GDR period, there was no tabloid press and people in general were a lot more relaxed about being photographed, or at least not so skeptical. Today it's a lot more difficult to take photographs in public places than it was back then. People are more concerned about the rights to their own image. But when I head east, to Romania or China for example, people there are a lot more open to being photographed. 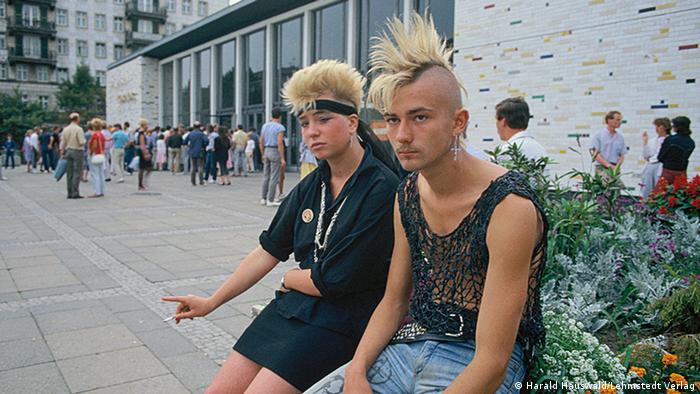 In the 80s, punks could be found all over the world; these two are outside the Kosmos cinema on Karl Marx Allee in Berlin

Berlin has changed dramatically and in a very short space of time since the fall of the Wall. Do you still feel at home in the city?

Not a lot changed in the first decade after the fall of the Wall. Then after 10 years the construction boom started. It's terrible - a real social and political failure. But for me, Berlin is still a surprising, beautiful, exciting city. It will always be home to me. Berlin is my roots.

What interests you about the medium of photography as opposed to, say, film?

The kind of photographs I make capture moments of surprise and that's really how I see Berlin, just like New York. To just head out and stalk the streets and find out what life has to offer. To see what surprises lie in store around the next corner.

It's a really exciting journey through life. I've made lots of friends through photography. It somehow opens up life. I don't feel stuck - just the opposite in fact. It's a constantly shifting dramaturgy. 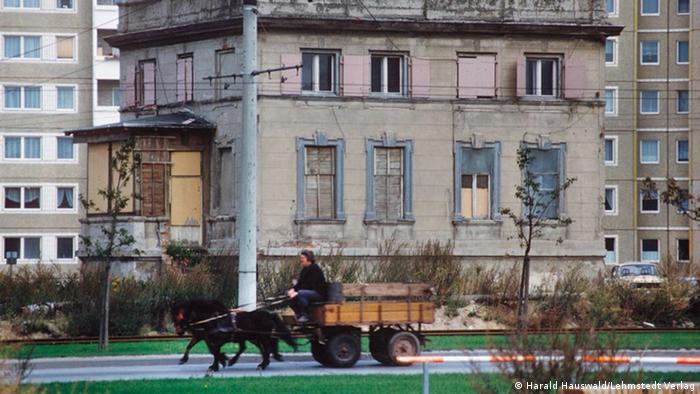 You are currently working on a project about the River Elbe…

Yes, it's an exciting project. In 1984 I sailed the Elbe from border to border with a writer. The band Yatra wrote a song for the exhibition of my Elbe photos and a couple of years ago one of the musicians, Peter Kühnel, contacted me because he wanted to produce a big stage project with opera singers, an orchestra and photo projections and we've been working on that for the past two years. I'm traveling the entire length of the Elbe this time looking for historic sites from the nights of bombing campaigns and firestorms during the war encompassing Magdeburg and Hamburg. Tomorrow I'm traveling the Elbe to photograph the floods as part of the project. It should premiere in fall 2014. 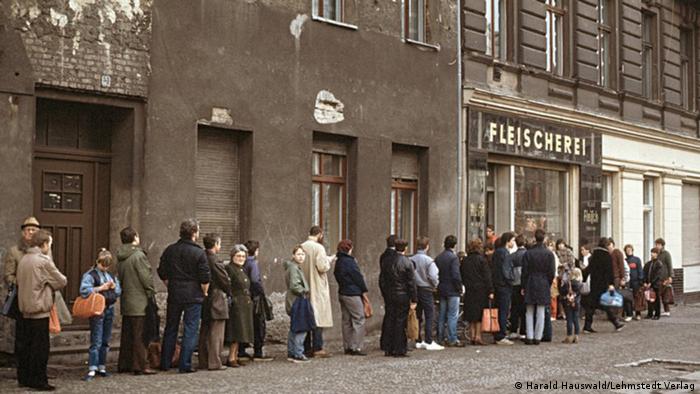 Waiting, as in this queue outside a butcher's shop, was common practice in East Berlin

Born in the former East German town of Radebeul in 1954, photographer Harald Hauswald trained as a photographer in Dresden in 1976 before moving to Berlin in 1978. His photographs have appeared in a range of publications including GEO, Stern and ZEIT Magazine. In 1989, he co-founded the Ostkreuz picture agency. In 1997, he was awarded the Order of Merit of the Federal Republic of Germany. His latest book "Ferner Osten. Die letzten Jahre der DDR. Fotografien 1986-1990," is published by Lehmstedt Verlag.

Hardy Graupner was working as a journalist in East Germany the night the Wall fell. Now a reporter for Deutsche Welle, he remembers the mixture of optimism and trepidation he felt as the world opened up to him. (23.04.2013)

As anyone who's struggled over the diagrams knows, Ikea furniture is self-assembly. But somebody has to make the individual components. Years ago, that somebody might have been an East German political prisoner. (16.11.2012)

Photography: The eye of the camera

See the world through the camera's eye. DW presents different takes on photography. (25.01.2013)

The history of East Germany

East Berlin before the Wall fell: a photographer's perspective 10.11.2021

Photographer Günter Steffen captured the final years of East Berlin under the GDR. The pictures reveal a decaying, abandoned city.