Philippines President Duterte has scaled back his comments about military and economic separation from the United States. But he did say he was ending a Philippine foreign policy that closely leaned toward the US. 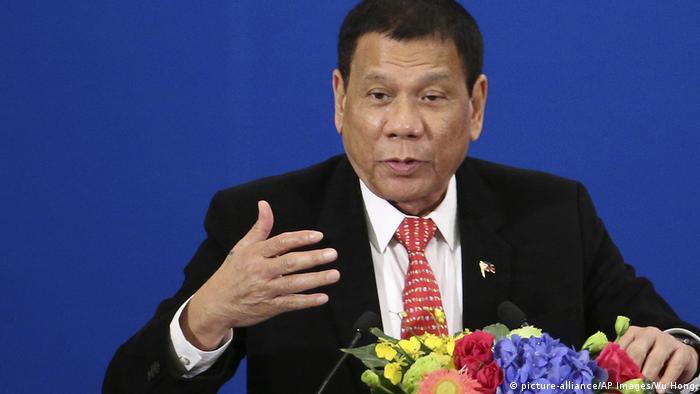 Philippine President Rodrigo Duterte said he would not sever diplomatic relations with the United States in a late-night speech in his hometown of Davao on Friday.

"When you say severance of ties, you cut the diplomatic relations. I cannot do that. Why? It's to the best interest of my country that we maintain that relationship," Duterte said in a speech in Davao city. However, he said  that he would never travel to America "in this lifetime."

Duterte said that instead of completely cutting away from the US, he wanted to "separate" the foreign policy in Manila from that in Washington. "It need not dovetail the foreign policy of America. That's what I meant," said Duterte.

Duterte wanted to clarify his statements after declaring to a group of Chinese businessmen at an economic forum in Beijing on Thursday that "I announce my separation from the United States," in favor of supporting China and Russia.

Duterte has made many stands against the United States during his time in office, turning vulgar at times. A scheduled meeting with US President Barack Obama in September was cancelled after he called Obama a "son of a whore."

In Friday's speech, Duterte went after the United States' criticism of his war on crime, which has left more than 3,600 dead since he took power on June 30. He said he did not care if the US or the European Union cut foreign aid to his country over concerns of human rights abuses in his crime crackdown. "Assistance, USAID, you can go to hell," he said, referring to the American program responsible for sending foreign aid. 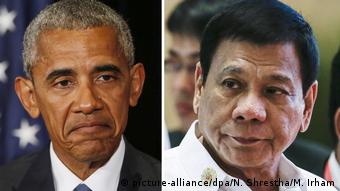 Philippine President Rodrigo Duterte (right) has made harsh statements against the US and its President Barack Obama.

Until Duterte took office, the Philippines was seen as one of the United States' most important allies in Asia and a key to Obama's "pivot" in the region.

Officials from the United States did not receive any formal notice from Duterte about his comments about the 70-year alliance.

White House spokesman Josh Earnest said Friday there had been "too many troubling public statements" by Duterte in recent months leading to uncertainty about his intent. Earnest said that the top US diplomat for East Asia would discuss that uncertainty when he traveled to the Philippines this weekend.

An important critic of Duterte has been former Philippine Foreign Secretary Albert del Rosario, who brought the successful arbitration case against China over disputes in the South China Sea. Del Rosario called Duterte's shift from Washington to Beijing "a national tragedy."

In the arbitration case led by del Rosario, the UN tribunal invalidated China's claims to virtually the entire South China Sea under a 1982 UN treaty. China has ignored the ruling, while the US and its allies have called on China to respect the decision.

After Duterte's four-day trip to China, both the Philippines and China announced several trade and business deals and resumed talks on the South China Sea. There was no mention of the arbitration ruling or Duterte's request that China respect fishing rights in the disputed Scarborough Shoal.

The combative president of the Philippines dismissed his country's long standing alliance with the United States. But the country's trade minister sought to walk back the president's controverisal comments. (21.10.2016)

The Philippines defense minister has said that if the US and EU don't like Manila's policies, they should withdraw aid. The statement comes as Manila tells the US it is suspending joint patrols of the South China Sea. (07.10.2016)