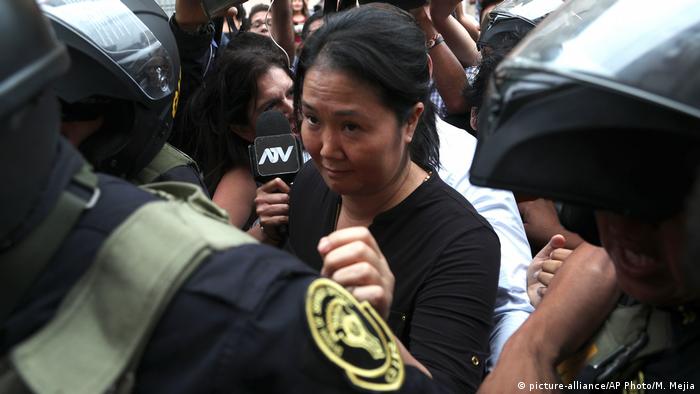 Peruvian opposition leader Keiko Fujimori was sent back to jail for a further 15 months on Tuesday as prosecutors continue to investigate money laundering accusations over the financing of her presidential aspirations.

Fujimori had already spent just over a year behind bars when the Latin American country's top constitutional court ordered her release last November.

However, prosecutors successfully appealed that decision, although their demands for an additional 18 month sentence were not met fully.

Fujimori arrived at the trial in Lima just before the judge finished reading his decision, which took more than eight hours. A handful of people gathered outside the court chanting in support of the embattled political figure.

The 44-year-old is alleged to have accepted $1.2 million (€1 million) in illicit funding from Brazilian construction firm Odebrecht during her unsuccessful 2011 run for office, but she has always maintained her innocence.

Odebrecht has admitted to paying at least $29 million to Peruvian officials since 2004, as well as bribing four ex-Peruvian presidents. The scandal involving the Brazilian construction giant stretches far beyond Peru, involving about a dozen countries across the continent.

Fujimori's defense team confirmed they would be appealing the ruling.

Keiko Fujimori is the daughter of former President Alberto Fujimori who is currently behind bars over human rights violations.

Peru to vote in a new Congress

Peru: Martin Vizcarra sworn in as president after predecessor Kuczynski resigns in ignominy

Vizcarra said his administration would "stand firm" in fighting graft in the Latin American country. Pedro Kuczynski, who Vizcarra replaced, resigned this week in response to a corruption scandal. (24.03.2018)

Keiko Fujimori is accused of receiving about $1 million in illegal payments from Brazilian construction giant Odebrecht. The former first daughter has described the efforts to imprison her as "political persecution." (01.11.2018)

The victims were among 16 killed when a bus crashed into a line of parked vehicles in southern Peru. A further 42 people were left injured. (07.01.2020)