A group of ultraconservative Christians staked out their claim to the stadium of the popular Alianza Lima soccer team. While they claim to be doing God's will, fans forcefully showed that they would have none of it. Members of the group "El Aposento Alto" ("the upper room") took possession of one of the Alejandro Villanueva stadium terraces early Monday morning. Reuters estimated a participation of hundreds of people, whereas local media La Republica said that thousands had been involved.

The religious members brought with them poles, staircases, construction hats, paint and metal sheets, local media reported, using the tools to seal off the stadium's entryways and cover up the team's emblems.

Fans of the Alianza team then descended upon the besieged stadium, where they clashed with the religious group's bible-wielding members. The fans and the Aposento Alto members, wearing blue shirts that read "Jehovah is God," hurled wooden beams at one another.

Peruvian police subsequently intervened and restored order, taking control of the stadium. At least one person was hospitalized with injuries and several were arrested. 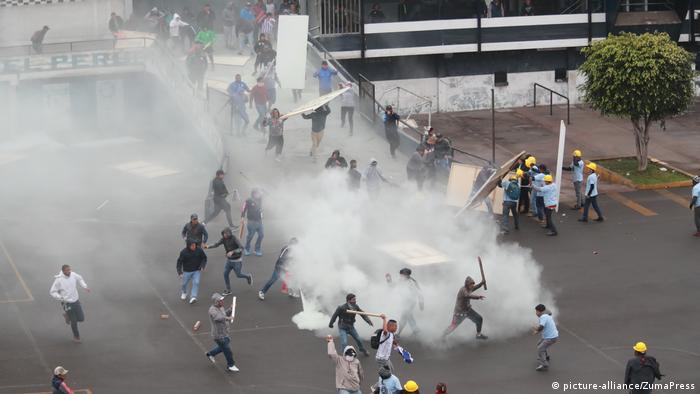 The violent confrontation reflects an ongoing disagreement between the evangelical group and the soccer club over property, which is located in the Matute neighborhood of Peru's capital city.

The evangelical group El Aposento Alto is led by Alberto Santana. Over the past months he had announced that his group would appropriate part of the stadium because it was the "will of God."

The religious group also maintains that it had purchased part of the abutting stadium property in order to build a temple, El Commercio reported. 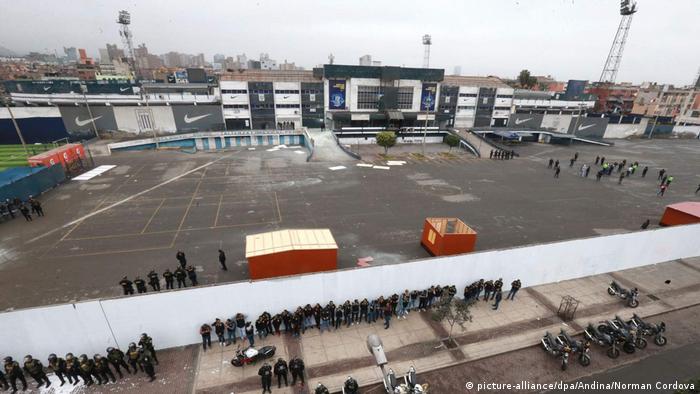 The Alejandro Villanueva stadium, now in police hands, belongs to one of Peru's most popular soccer teams

But Alianza Lima rejected any claim of ownership by Santana's group and described the takeover as a "usurpation" in a press statement while urging fans to remain calm. The club later announced that it would take legal measures against the evangelical organization.

Meanwhile, the Alianza fan club bar Comando Sur posted photos on its Twitter account of soccer fans working to repaint the stadium with the team's slogans and symbols.

Comando Sur speculated that the religious group launched the takeover in order to divert attention from corruption proceedings against the ex-presidential candidate Keiko Fujimori. The politician is considered a close ally of the evangelical leader Santana, who himself is considering launching a political party.

Fujimori is the daughter of imprisoned ex-President Alberto Fujimori, who will stand trial for murder.

Following a 20-year legal battle, Germany has returned a priceless eighth-century funeral mask to Peru. The mask was confiscated by Interpol in the German town of Wiesbaden in 1999. (07.09.2018)

Although all votes have been counted, Pedro Castillo's right-wing rival, Keiko Fujimori, has called on some ballots to be annulled, claiming fraud.

The former Peruvian leader has been serving a jail sentence since 2007 for human rights violations. The court reinstated a "humanitarian pardon" on health grounds first announced in 2017 but revoked within a year.