Following a 20-year legal battle, Germany has returned a priceless eighth-century funeral mask to Peru. The mask was confiscated by Interpol in the German town of Wiesbaden in 1999. 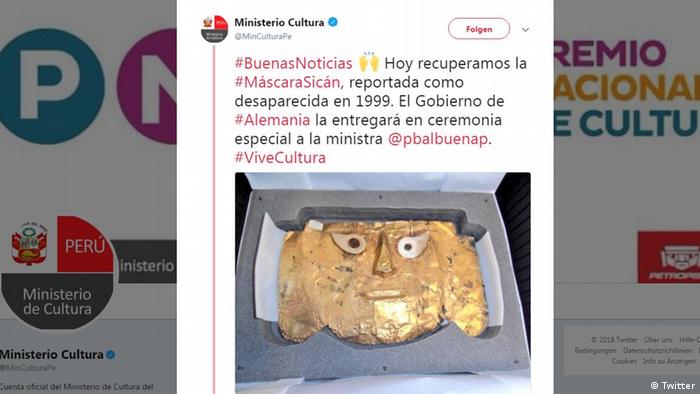 The eighth century Sican mask was handed over to the Peruvian embassy in Berlin by Bavarian authorities.

"I'm happy to receive one of the most emblematic assets from the north Peruvian cultures, the Sican Mask," said the Peruvian Minister of Culture Patricia Balbuena in a statement.

Peru reported the mask as missing in 1999, and it was then confiscated by Interpol in the western German city of Wiesbaden.

The Munich regional court ordered the mask be returned to Peru in December 2016.

The Sican culture inhabited what is now the north coast of Peru between the eighth and 14th centuries.

The Sican masks have been found in the tombs of people who are thought to have had an elevated position in Sican society.

A work by a 17th-century Dutch master was smuggled to North American after World War II. After 75 years, it's been returned to the German museum where it belongs. Here's the tale of a painting that's fit for James Bond. (11.07.2017)

Nine Alaskan burial artifacts brought to 19th century imperial Germany are to be returned next week to indigenous Pacific coast residents. A Berlin-based museum trust has long admitted that the items were stolen. (09.05.2018)