China's land reclamation in the South China Sea has ramped up dramatically, US officials say, with Beijing reportedly developing infrastructure in the disputed area. They've warned of a threat to stability in the region. 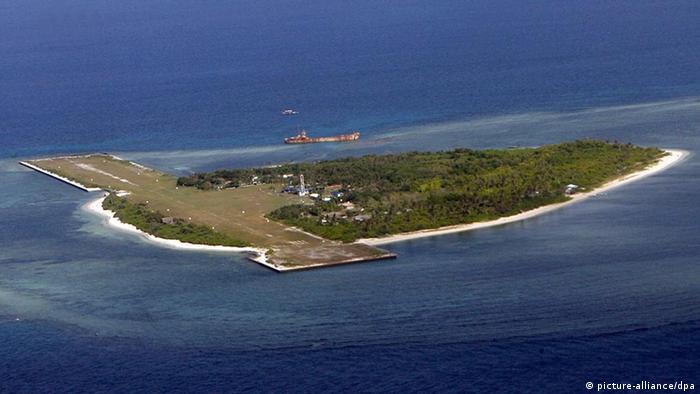 The Pentagon warned on Friday that China has developed around 800 hectares (2,000 acres) of artificial islands in strategic South China Sea waters. Three-quarters of that land has been added in the last five months, officials said.

The alert came in the Pentagon's annual report to the US Congress on the state of China's military. It said Beijing's land reclamation effort in the region "dwarfs that of any other claimant," referring to countries with territorial claims there.

The South China Sea is home to strategically vital shipping lanes and is believed to be rich in oil and gas.

According to the news agency AFP, Washington is concerned China's efforts carry a military dimension that could undermine America's naval and economic power in the Pacific.

The report covered a period ending in December 2014. It said that China had reclaimed 200 hectares in the disputed waters up to that point.

Satellite images on the website of the Washington-based Center for Strategic and International Studies (CSIS) showed Chinese island-building in several locations, including construction of a runway on Fiery Cross Reef in the Spratly Island chain.

According to the 89-page report, the ultimate purpose of the effort remains unclear but analysts outside China say Beijing is "attempting to change facts on the ground by improving its defense infrastructure in the South China Sea," the news agency AFP reported.

China plays down its territorial ambitions

China has repeatedly defended its construction work as taking place within its own territory and insisted that its intention was to help with maritime search and rescue, navigation and research.

The Pentagon cited China's explanation that the island projects were intended to improve the living and working conditions of those on the island.

Land reclamation is only one of the areas where China is seeking to expand its global footprint, the Pentagon said.