PEGIDA and Islamists clash in Wuppertal

More than 1,000 police have been deployed across the western German city of Wuppertal as supporters of the anti-Islam PEGIDA movement, Salafists, and counter-demonstrators took to the streets simultaneously. 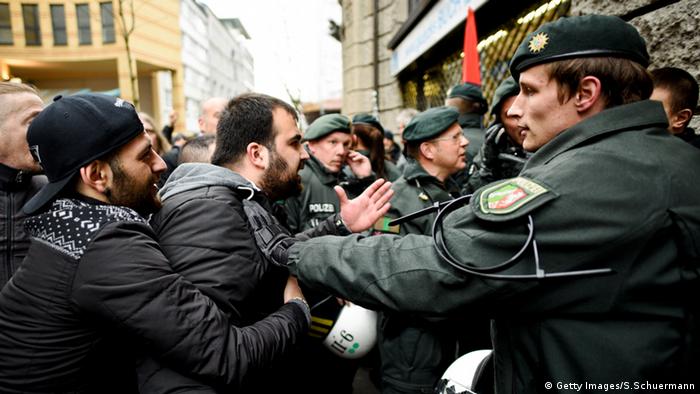 German news agency DPA reported that masked demonstrators threw firecrackers at authorities, as police wearing riot gear and armed with batons tried to push back the protestors at Saturday's protests.

Less than 3,000 people took part in the protests, far fewer than were expected to take to the streets, authorities said several hours after the marches began.

Wuppertal’s Mayor, Peter Jung, earlier on Saturday asked people to protest against the extremists, adding the protests should be allowed to take place.

It is "just the price for our free democracy that ultimately you cannot prevent such marches," he said.

Police blocked off several streets in the city fearing the potentially violent mix of demonstrators could spark riots as seen in previous demonstrations.

In October, serious rioting occurred at a protest by the group Hooligans Against Salafists in the city of Cologne in North-Rheine Westphalia, which is in the same state as Wuppertal.

Demonstrators have also clashed with police at past marches in Bonn and Solingen.

Thousands of people have demonstrated in favor of refugees in the German city of Dresden. Organizers aim to make the Saxony capital, which is also the home of anti-Islamization group PEGIDA, appear more welcoming. (28.02.2015)