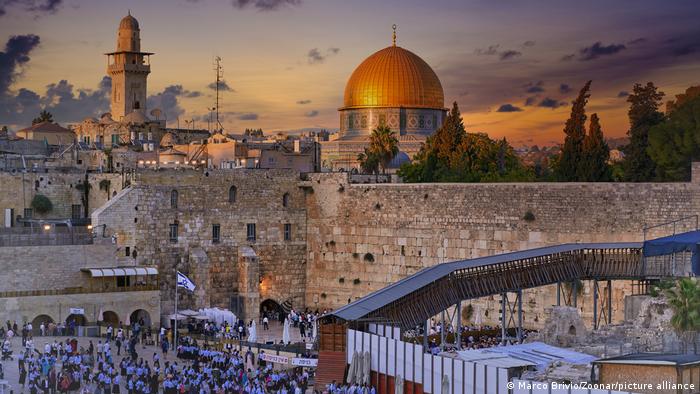 This Friday, Christians commemorate the crucifixion of Jesus, and on Sunday celebrate Easter, marking their belief in his resurrection. On Friday, Jewish people celebrate the eve of Pesach, commonly called Passover, which commemorates the exodus of the Israelites from Egypt and the end of their slavery.

And this weekend as well, Muslims around the world mark another Friday, their weekly holiday, within the month of Ramadan, which began on April 2 and ends on May 2. This coincidence of dates is unusual, especially as far as the proximity of the Islamic Ramadan to the Christian Lent or to the dates of Pesach and Easter is concerned.

This rare conjunction of holidays is possible because unlike the Christian calendar, which is determined by the course of the sun and is widely used in the Western world, the Islamic calendar is aligned with the moon and the lunar year. Twelve months in the solar year last 365 days, in the lunar year, on the other hand, only 354 days. Thus the Islamic cycle of holidays moves across the Western calendar over the course of a good three decades.

The shorter course of the year offers Muslims "the chance to experience Ramadan as well as other festivals in different seasons and different climatic conditions," the spokesperson for Germany's Coordination Council of Muslims, Abdassamad El Yazidi, told DW. At the same time, it ensures that the Muslim holy days coincide over time with various holy days of Christians and Jews. "That should remind us that we are all siblings in humanity and must work together for good."

The Jewish holiday of Pesach and the Easter date of the Western churches, on the other hand, always occur quite close together in early spring. But they don't often fall on precisely the same date. In 2022, Passover begins on April 16, and the Christian Holy Week — which began on April 10 on Palm Sunday — climaxes from Maundy Thursday evening on April 14 to Easter Sunday morning. The holiday covers Jesus' "Passion," from the last supper with his disciples to the celebration of the resurrection.

The difference is due to the fact that the Christian calendar dates Easter to Sunday since the year 325 CE, more specifically to the first Sunday after the spring full moon. In the Jewish calendar, on the other hand, Passover can begin on any day of the week.

Nowhere in the world do the celebrations of multiple monotheistic religions come together as closely as in Jerusalem. One can feel how all three religions are "looking forward to these days," German Benedictine monk Nikodemus Schnabel told DW. In what he described as an "intense time" there, "the city literally vibrates with the various pilgrims, as if there was a need to catch up after the coronavirus, to celebrate outside again and to come together for the festivals," said the monk, who has lived on the outskirts of Jerusalem's Old City for many years.

Ultimately, according to Schnabel, the common experience of a pilgrimage festival connects the religions. Christian churchgoers parade in prayer through the Old City for several days in a row. On Friday morning, Muslims go to the mosque on the Temple Mount for prayer. And during these days, many Jews are drawn to pray at the Wailing Wall — the ruins of the Western Wall of the Second Jewish Temple in antiquity. The location is considered by many Jews to be one of the holiest sites to pray at, due to its proximity to the nearby Holy of Holies, the most sacred part of the ancient temple. In view of the political tensions in the area, such days are always a challenge for all security forces in the city.

After this weekend, however, the Easter celebrations are not over. In the Orthodox churches and some of the Eastern churches associated with the Catholic Church, the commemoration of the death and resurrection of Jesus is not held until the following weekend.

The reason for the differing dates is that in 1582, the Eastern Christians, under Pope Gregory XIII, opted for a calendar reform that shifted liturgical timing towards the Gregorian calendar. Those traditions now mark the beginning of spring differently.

The Greek, Russian, and other Eastern Christian Orthodox churches are celebrating Easter this year a week after the Western Christians. And in Germany, Ukrainian-speaking communities are preparing for a large crowd. Churches are expecting many Christians who have fled the Russian invasion in recent weeks.