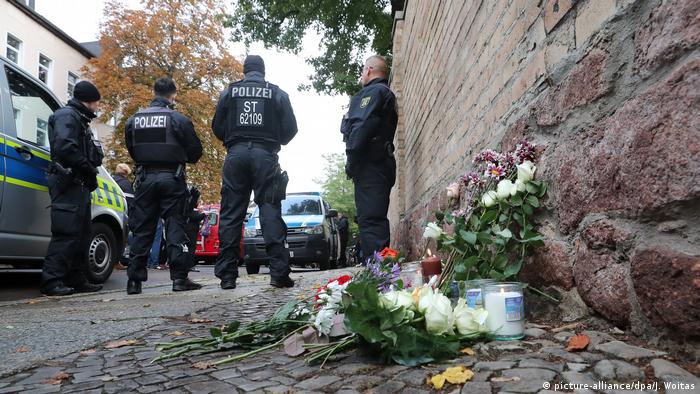 Passers-by apparently ignored the first victim of a terrorist attack in the German city of Halle last October, according to reports published in German media on Friday.

"In the middle of a major German city a person lies shot on the pavement, but people walk past," the paper wrote.

Read more: Germany synagogue attack: Who were the victims in Halle?

Around 50 people were present in a synagogue in the eastern German city of Halle on October 9 when a heavily armed gunman shot at the door and three explosive devices.

After failing to enter the synagogue, the attacker shot and killed a 40-year-old woman in the street and a 20-year-old man in a kebab shop. He also injured a couple while trying to flee, according to the DPA news agency.

What does the surveillance footage show?

The report casts a new light on the circumstances of the first victim's death.

The woman continued to lie unaided in a pool of blood as several other passers-by walked along, until a man with a ponytail went to help her, apparently calling for an ambulance. No-one appeared to offer first aid.

The attack took place on Yom Kippur, the holiest day in the Jewish calendar. The supsected perpetrator has confessed to the attack and admitted anti-Semitic and racist motives.

How can Germany better protect its synagogues?

A wooden door was all that stood between worshippers and a neo-Nazi terrorist bloodbath at a German synagogue on Judaism's holiest day. Leaders of Germany's Jewish community are asking for better protection. (11.10.2019)