'Partygate' report decries 'failures of leadership' in the UK 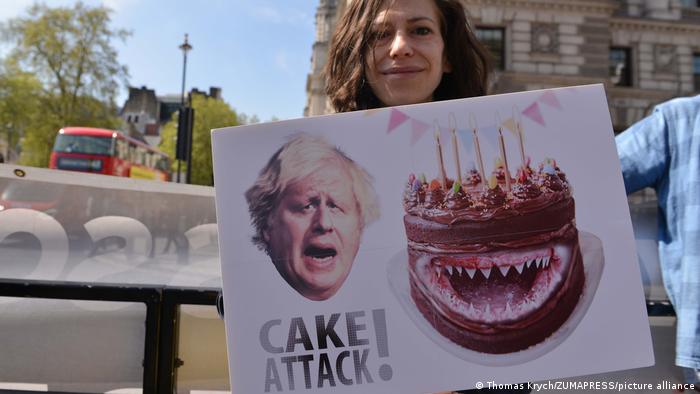 A new internal report criticized top officials for parties that occurred in government offices while the United Kingdom was ostensibly under lockdown restrictions.

Written by senior civil servant Sue Gray and published on Wednesday, the so-called Partygate report is the result of an investigation into  16 gatherings attended by Johnson and his staff in 2020 and 2021.

Gray wrote: "Senior leadership at the center, both political and official, must bear responsibility for this culture."

The report added: "Many of these events should not have been allowed to happen."

Gray published photographs of Johnson toasting staff with wine. She also described partying into the early hours, with music from a karaoke machine.

Security and cleaning staff were mocked when they tried to protest at the staff conduct, the report said.

In the report, staff offer accounts of parties where "bring your own booze" was encouraged and a regular "wine time Fridays" took place in the prime minister's office at 10 Downing Street during periods of lockdown.

Junior staffers — most of them women — had been told to attend events by their bosses, the inquiry found.

Is there fallout expected?

Speaking after the publication of the report, Johnson told Parliament that he took "full responsibility for everything that took place," adding he was "humbled" and "learned a lesson," but that it was now time to "move on."

Critics, including some from within his own Conservative Party, have said he lied to Parliament, traditionally an offense leading to a resignation in British politics.

But while Johnson has apologized for his role in the "partygate" scandal, he has also said he did not knowingly break the rules his government had made.

He said he had been unaware of many of the details included in the report.

Opposition Labour Party leader Keir Starmer told parliament: "You cannot be a lawmaker and a law-breaker."

"When the dust settles and the anger subsides, this report will stand as a monument to the hubris and the arrogance of a government that believed it was one rule for them and another rule for everyone else."

A separate police investigation resulted in fines for 83 people including Johnson, which made him the first British prime minister found to have been in violation of the law while in office.

What was happening in the 'partygate' scandal before now?

The stories of boozy Downing Street gatherings first surfaced last year. The allegations that Johnson and his staff spent the pandemic partying while millions of regular citizens were barred from seeing friends and family have damaged the government badly.

Johnson has been able to hold onto power so far in part due to the war in Ukraine distracting public and political attention away from the scandal.

Some Conservative lawmakers who would have pursued a no confidence vote opted against in light of a war that has disrupted postwar security structures in Europe and sparked inflation as well as fuel price hikes.

Metropolitan police told Johnson last week they would not issue him any more fines despite attending parties that are under investigation.