As official LGBT+ Pride events around the world were postponed or went virtual because of the coronavirus pandemic, thousands of grassroots protesters in Paris turned out to protest racism and police brutality. 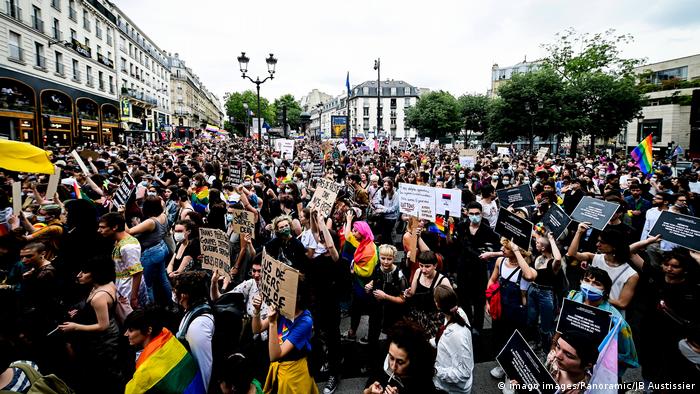 Thousands of people turned out to a politically engaged LGBT+ Pride march in Paris on Saturday, a week after the officially scheduled event was set to take place. Pride parades around the world have been canceled owing to the coronavirus pandemic.

Peaceful marchers eschewed the normal colorful floats and loud music that are hallmarks of Pride and instead focused on protesting racial inequality and police brutality. Many marchers held "Black Lives Matter" and chanted slogans such as "Everyone hates the police."

The unofficial protest was led by grassroots LGBT+ groups, many of which are vocal critics of Inter-LGBT, the group that organizes Paris Pride. Inter-LGBT has rescheduled Paris Pride for November.

Over 200 Pride events around the world have been postponed owing to the coronavirus pandemic.

An event in Madrid was hosted entirely online, while New York live streamed performances in front of virtual protesters.

This year marks 50 years since the first Pride parade in New York city, originally a protest movement inspired by the anniversary of 1969 Stonewall riots. Many activists have pointed out the parallels between the roots of the struggles for LGBT+ emancipation and the current ongoing protests against the killing of unarmed black man George Floyd in Minnesota.

This weekend marked the end of the usual Pride month, which extends through June.