Flowering compost urinals are being trialed in the French capital as a green weapon in its long-standing battle against "wild peeing." Because urinating in public also causes environmental problems, not just a stink. 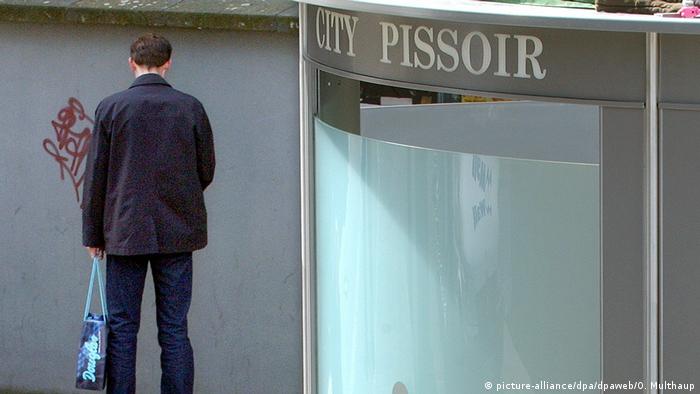 The stench of urine has been plaguing Parisians' noses for decades - if not centuries. But as if discomforting nostrils weren't enough, open-air peeing in the city can also damage infrastructure, hurting the public purse.

Aside from being time-consuming, cleaning up urine-soaked fixtures wastes water and uses detergents that harm the environment - Paris employs a team of sanitation workers to scrub around 1,800 miles (almost 2,900 kilometers) of sidewalk every day.

But now Paris is hoping to curb the destructive effects of what the French call "les pipis sauvages" - or "wild peeing" - with a green solution.

It is currently trialing the Uritrottoir, adorned with a miniature garden on top, where urine is funneled down from the front part into a closed box below filled with straw and sawdust. 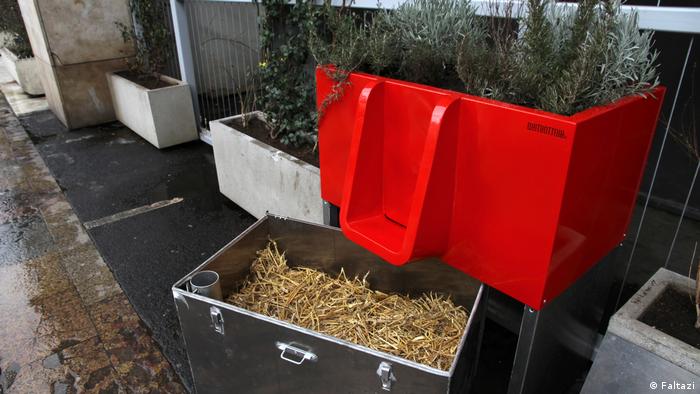 The Uritrottoir doubles as a flower planter

This is then converted into compost that can be used in parks and gardens. Another bonus of using straw is that its high carbon content that helps tackle the unpleasant odor.

Two of the eco-friendly urinals covered in bright red, graffiti-resistant paint are being tested at the Gare de Lyon train station in Paris - a notorious hotspot for relieving oneself in public. If successful, the scheme will be expanded to other stations throughout France.

Laurent Lebot, who designed the Uritrottoir together with Victor Massip (both of design firm Faltazi) told DW: "We have a big problem of a very bad smell because guys, they are drunk, they're coming from a night club, for example - they don't go in a urinal." 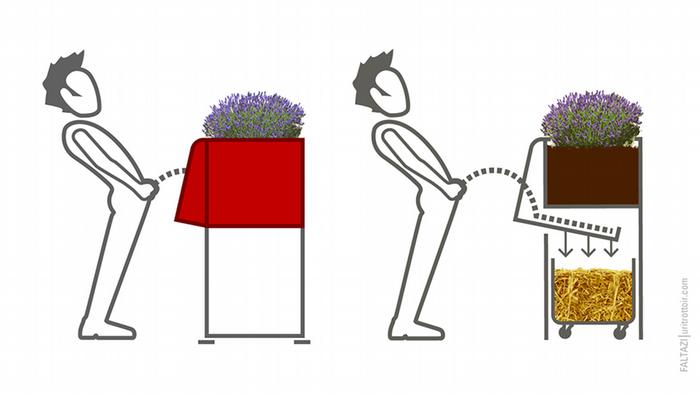 He told DW that Paris has made efforts to battle public urination, installing 450 free, self-cleaning unisex public toilets called Sanisettes, in place since 2006 - but said that number was just too few to stem the tide.

Since public peeing degrades telephone poles and lamp posts, hydrophobic paints and metal sheeting have also been tried - but all this still hasn't allowed for getting a grip on public urination, said Lebot.

The threat of a 35-euro ($37) fine if caught likewise hasn't been enough to deter many.

The urinal comes in two sizes, with the larger model estimated to absorb the urine of 600 users, based on an average of 450 milliliters (15 ounces) per urination, before needing to be emptied. 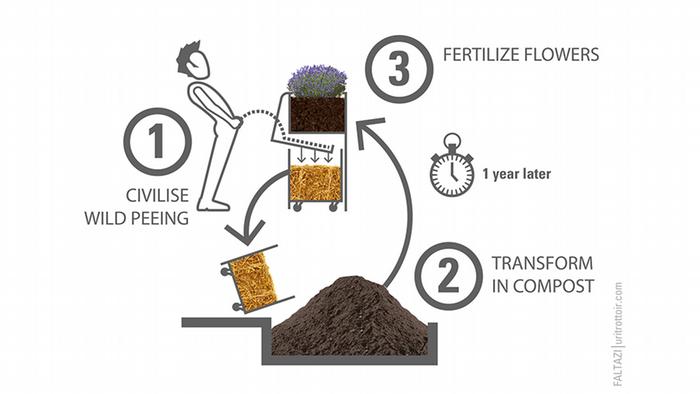 The smaller one is expected to hold the urine of 300 users. This is where another eco-friendly feature of the Uritrottoir comes in.

The urinals, which cost around 3,000 euros each, are fitted with electronic monitoring sensors which alert a remote "toilet attendant" when they are full - meaning fuel doesn't need to be wasted driving to urinals checking whether they need to be emptied, Lebot told DW.

It is this dovetailing in thinking, where the environmental friendliness is factored in over a device's entirety, which lies at the heart of eco-design, said Lebot. He lamented that too few designers are working on green solutions.

"It's very important to do eco-design, to imagine that objects and appliances need to be designed by factoring in climate problems," he told DW. Not just for the guys

The urinals are also on trial in the designers' home city of Nantes, in western France, with an earlier version of the device having been used at summer rock festivals.

Lebot told DW that they may be coming to Germany too one day, saying that the cities of Cologne and Saarbrücken have both made inquiries into how the urinals work.

And not to leave the ladies out, Lebot said the firm also wants to create a female version of the Uritrottoir.

"It's more complicated because for female toilets, you need to create a cabin, to close it all the way around," he explained. And they are just a small team of two guys who don't have a lot of money.

"But we are working on it," he said hopefully.

One step closer to pee power

What if we could tap a daily waste product for energy? Making power out of pee is nearing practical application - it's a effective and hygienic option for sustainably managing waste. (12.04.2016)