A Palestinian man has confessed to carrying out a knife attack at a German supermarket that killed one person and wounded six more. The defendant told investigators the attack had some connection to events in Jerusalem. 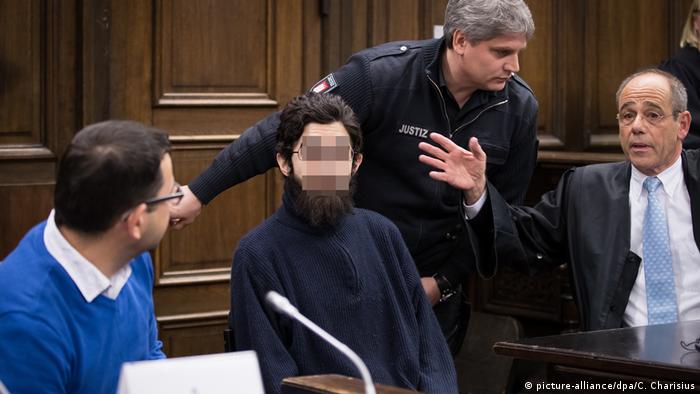 A 26-year-old Palestinian man on Friday confessed in front of a German court to killing one person and injuring six others in a knife attack at a supermarket in the northern German city of Hamburg.

The man, identified as Ahmad A., made the confession as his trial got underway.

"He admits in all charges that he is expressly guilty," his lawyer said at the start of the trial.

Prosecutors charged the rejected asylum seeker with murder and six cases of attempted murder and grievous bodily harm, saying he likely acted with an Islamist motive. But investigators did not find evidence that he was part of the "Islamic State" (IS) group.

The attack happened on July 28, 2017, at an Edeka supermarket branch in the Hamburg district of Barmbek, when Ahmad A. is alleged to have taken a 20-centimeter-long (8-inch-long) kitchen knife from the store and attacked two people inside, one of whom died.

He is then said to have gone outside the supermarket, where he injured five more people. He has been in custody since the attack.

Ahmad A. could face life in prison, but Germany often grants parole after 15 years.

Attack had 'some connection' to Jerusalem

Ahmad A. told interrogators that the crime "had some connection with events on the Temple Mount" in Jerusalem, where Israeli authorities had recently imposed access controls for Muslim worshipers, prosecutor Yasemin Tuz told the court.

"The results of the investigation show that the accused sought out his victims indiscriminately, retaliating against people who in his view represent perpetrators of injustice targeting Muslims," prosecutors said earlier.

"It was important to him to kill as many German nationals of the Christian faith as possible. He wanted his actions to be viewed in the context of an Islamist attack, and understood as a contribution to jihad worldwide," they added.

Tuz said that from time to time Ahmad A. had demonstrated "suspect behavior, transforming" his life towards radical Islam before "again taking up a Western lifestyle."

Ahmad A. was meant to be deported after his asylum application was rejected by authorities at the end of 2016, but the process was held up by a lack of identity documents.

The incident in the northern city was the first Islamist attack in Germany since Tunisian Anis Amri drove a truck into crowds at a Berlin Christmas market in December 2016, killing 12 people and injuring 48.

Amri was shot dead by police in Milan four days later, and the attack was claimed by the "Islamic State" group.

Germany has been on high alert over the threat of a jihadi assault since the Christmas market truck rampage. Like Ahmad A., Amri was supposed to have been deported after his asylum application was rejected by authorities.

The trial is expected to last until March 2, with the six people injured in the attack invited to attend the hearings from January 26.

"Islamic State" has claimed responsibility for a knife attack in Brussels on Friday. A man armed with a machete was shot dead after attacking soldiers in the Belgian capital. (26.08.2017)

The United Kingdom is experiencing an almost unprecedented spike in hate crime against ethnic minorities. Are the authorities helpless to combat the problem? Sarah Bradbury reports from London. (14.10.2017)