Journalist Matiullah Jan had gone missing in Islamabad, according to his family and rights groups. A well-known reporter in Pakistan, he has previously criticized the country's judiciary and military. 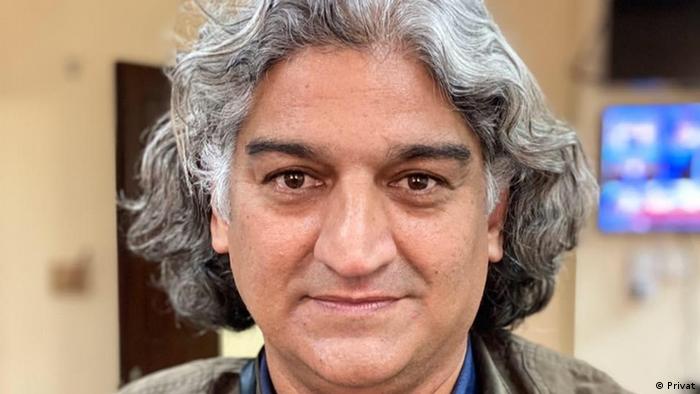 Journalist Matiullah Jan was released from a brief abduction in the Pakistani capital of Islamabad, his brother Shahid Akbar Abbasi told DW.

Abbasi said that Jan had been found and was on his way home. When asked about the journalist's condition, Abbasi described him as "safe and sound." He said that Jan had been abducted by "unknown" men, without revealing any details. He did not disclose where Matiullah Jan was found, but local media reported that he was released some 45 kilometers (28 miles) west of Islamabad.

Fellow journalist Azaz Syed tweeted a photo of Jan on Tuesday evening, saying he had been held for 12 hours.

Matiullah Jan went missing on Tuesday, his wife Kaneez Sughra had told DW. He disappeared outside an Islamabad school where she works. Sughra said she heard men scuffling outside the school. "I tried calling him, but his phone wasn't working," she added.

When the guard at the school told her that Jan's car had been parked outside for two hours, she said she realized something was wrong. "The doors of his car were open and the keys were still inside," she told DW. "I could see from the car that he was taken forcibly."

The Reuters news agency reported closed-circuit television cameras at the school showed Jan being bundled into a car after being cornered by what appeared to be a police vehicle, an ambulance and an unmarked car.

The Human Rights Commission of Pakistan condemned the abduction, calling it "an act of cowardice."

Read more: Is the space for critical thinking shrinking in Pakistan?

Amnesty International South Asia said it was "extremely concerned" about Jan's well-being and called on the Pakistani authorities to "establish his whereabouts immediately," noting the journalist had suffered violence and harassment for his work in the past.

Jan had previously been the target of attacks. In 2017, rocks were thrown at the car he was driving near the capital, Islamabad.

He was fired from his position as an anchor at Waqt Television in 2018, reportedly under pressure from the military, which he had criticized. He has since maintained a presence on YouTube and other social media platforms.

Pakistan's Supreme Court earlier this month issued a contempt of court notice to Jan for a tweet critical of the judiciary. He was expected to appear in court within the next week.

Earlier on Tuesday, Jan tweeted a video of an interview with another journalist, writing: "This is for the attention of those who sit in the simulated air-conditioned environment of rule of law in Pakistan and who think criticism on them is a bigger crime than the violation of the inviolable dignity of a human being."