At least three polio workers have been killed in April, while thousands of parents have refused to allow their children to be inoculated. Pakistan is one of the three countries in the world where polio is endemic. 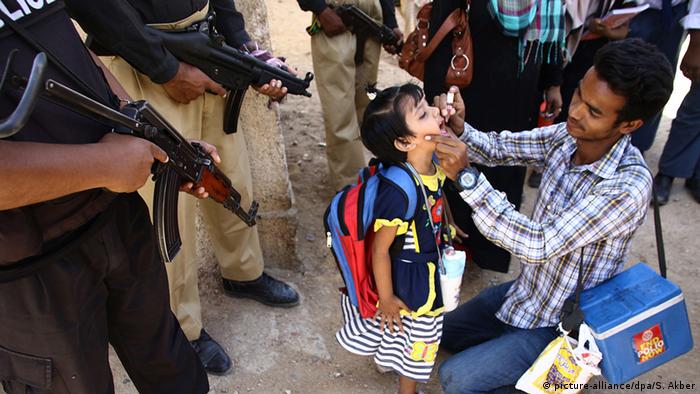 Pakistani authorities have suspended the anti-polio campaign "for an indefinite period" across the country amid increasing violent attacks on polio workers.

An anti-polio drive was launched in all districts of the country on April 22.

The South Asian country's National Emergency Operation Centre (EOC) for polio directed all provinces on Friday to halt the drive, in an effort to protect some 270,000 polio field staff from attacks, Pakistan's Dawn newspaper reported on Saturday.

On Thursday, gunmen opened fire on female health workers in the southwestern town of Chaman, killing one and wounding another.

In separate attacks on Tuesday and Wednesday, assailants killed two policemen who were assigned to protect a polio vaccination team in the northwest.

"After the Peshawar incident, the uncertain and threatening situation for the frontline polio workers has emerged and we need to save the program from a further major damage," Dawn quoted the EOC as saying in a statement, adding that the Global Polio Eradication Initiative (SPEI) partners had backed the move.

"Hence, no further vaccination or catch-up activity will be conducted in any area for this campaign," said the EOC.

The violence coincided with rumors of children suffering from adverse reactions to a polio vaccine.

Polio is endemic in only three countries in the world – Afghanistan, Pakistan and Nigeria. Last year, a relatively rare strain was also detected in Papua New Guinea.

Polio is a highly infectious viral disease, mainly affecting children younger than five. It can cause permanent paralysis and death, but can be prevented through immunization. The virus is spread through contaminated food and water.

Anti-polio campaigns have faced immense problems in Pakistan, with radical Islamists targeting health teams and people mistrusting the drive in some parts of the country.

Islamists claim that the US's Central Intelligence Agency (CIA) organized a fake vaccination drive to help track down Osama bin Laden in the city of Abbottabad, where US forces later killed the al-Qaida leader in 2011.

In July 2012, Pakistani authorities had to postpone an anti-polio campaign in the northwestern region of Waziristan after Taliban leaders banned inoculations, claiming the drive was similar to a hepatitis vaccination program run by the imprisoned Pakistani doctor Shakil Afridi, who they say had helped the CIA in the bin Laden hunt.

The same year, the United Nations suspended its polio eradication campaign in Pakistan after the Taliban killed two of its workers in the northwestern city of Charsadda.

At least 100 people have been killed in assaults targeting vaccine teams since 2012.

Journal Reporter - The Dangers of Fighting Polio in Pakistan

Pakistan's latest anti-polio campaign was also hampered by social media reports and videos claiming numerous children had been killed by the polio vaccine. As a result, thousands of parents refused to allow their children to be inoculated for polio.

Health officials say a "pre-planned conspiracy" was responsible for the panic. They say the misinformation has inflamed already existing distrust of anti-polio campaigns, resulting in "a three-fold jump in refusals by parents to vaccinate their children" in the last two years.

Authorities say that some 700,000 children missed polio inoculations in Punjab province alone, putting too many lives at risk.

"Here people have little knowledge, so if they see a professor allegedly from the US or elsewhere [on social media] who is against the vaccine, they are easily convinced," Rana Safdar from Pakistan's National Institute of Health told AFP news agency.

"Now there is a pushback. We need to regain the momentum," he added.

Sherry Rehman, leader of the opposition in Pakistan's Senate (upper house of parliament), said in a message on Twitter that "the polio vaccine is effective and safe ... Parents everywhere in the country must NOT hold back. The vaccine is safe."