Pakistan: Imran Khan slammed for negotiating with Peshawar school attackers | Asia | An in-depth look at news from across the continent | DW | 11.11.2021

Islamabad has come under heavy criticism for "giving concessions" to the Tehrik-e-Taliban Pakistan, which killed 132 children in Peshawar in 2014. Imran Khan's government is currently negotiating with the militant group. 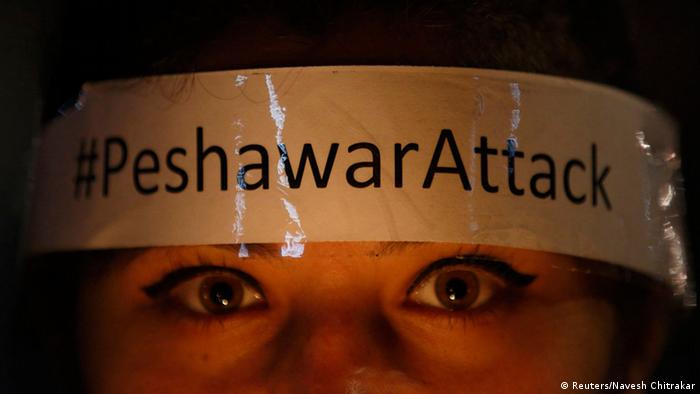 Dost Muhammad was shellshocked when he heard that the Pakistani government had started negotiating with the Tehrik-e-Taliban Pakistan (TTP). The group was responsible for attacking a military-run school in Peshawar on December 16, 2014, laying siege and killing 132 schoolchildren.

"The government did not take us into confidence over the negotiations with the murderers of our children. They have no right to decide alone and talk to the TTP. They should have consulted us before engaging with them," Muhammad told DW.

"Prime Minister Imran Khan's children are living in the UK; he can't feel our pain," he added.

Khan grilled by the Supreme Court

Earlier this week, Khan's government signed a monthlong cease-fire agreement with the local Taliban group, which has been involved in numerous attacks on the country's security forces and civilians over the past 15 years.

The government is also holding talks with the banned outfit, and some ministers have hinted that the group could be given amnesty if it agrees to lay down arms and respect the Islamic country's constitution.

On Wednesday, Pakistan's Supreme Court summoned Khan to a Peshawar school massacre case hearing and grilled him over the TTP talks.

"Why are we bringing them [TTP] to the negotiating table instead of taking action against them?" a judge asked Khan.

The court told the prime minister to pay heed to the parents' demands and take action against the school attackers.

The Peshawar school massacre case was filed by the families of children who had died in the attack. Every year on December 16, relatives, families and members of civil society hold vigils to remember the victims and urge authorities to bring the culprits to justice.

According to Moeed Yusuf, Pakistan's national security adviser, the government has not taken any decision to grant amnesty to TTP members, emphasizing the state was "very clear and sensitive" on the issue.

But other officials believe the government can force the group to lay down arms.

Fawad Chaudhry, the information and broadcasting minister, told media that if TTP members show allegiance to the constitution, the government could give them "a chance."

"We believe that the government must talk from the position of strength," he added.

At the same time, Chaudhry pointed to the Taliban's return to power in Kabul, saying the new Afghan rulers had asked Islamabad to negotiate a deal with the TTP.

Analysts believe the negotiations show the government's weakness despite defeating the group militarily.

"The Pakistani state defeated the group militarily in 2015, and while the TTP has been resurgent in recent months, the Pakistani army clearly has the ability to tackle them again," Madiha Afzal, a foreign policy expert at the Washington-based Brookings Institution, told DW.

"The other problem is that the government hasn't taken parliament into confidence and has gone about talks with the TTP unilaterally," she added.

Bilawal Bhutto Zardari, leader of the opposition Pakistan People's Party, slammed Khan for not consulting the parliament before initiating talks with the TTP.

Zardari, whose mother Benazir Bhutto, a former premier, was allegedly killed by the Pakistani Taliban, said this important issue needed a broad consensus in the country.

Raza Rumi, a political analyst, said Islamabad is following "the US playbook for Afghanistan."

"Instead of continuing an endless battle with the TTP, Pakistani authorities want to find common ground to avoid attacks on state facilities. Also, if they continued to fight the TTP, Islamabad's ties with the Afghan Taliban would be strained," he told DW.

But other analysts believe the TTP cannot be trusted, as in the past it did not fulfill its obligations under the cease-fire agreements.

"The terms of negotiations would have the terrorists granted amnesty in exchange for laying down arms. This means they will not be held accountable for killing tens of thousands of Pakistanis and for terrorizing a nation for the better part of a decade," Afzal said.

"It would also set a terrible precedent for other militant and terrorist groups in the country, as well as would-be terrorists," she warned.

Rumi said the TTP is stronger than ever due to the US withdrawal from Afghanistan and the Afghan Taliban's return to power.

"The TTP is in a strong position, and if Pakistan signed an agreement with them, they would be even stronger. The more agreements you make with them, the more you display your weakness. It gives out a message that a powerful state, with a trained military and nuclear weapons, cannot fight the militants," Rumi underlined.

"This policy is not going to be sustainable. Sooner or later, Islamabad will have to rethink its position and approach towards the TTP," he added.