Pakistan: How has COVID impacted the LGBT+ community?

The pandemic has resulted in reports of domestic violence and mental distress among LGBT+ people. Restrictions have made it more difficult to find partners because of virus fears and as many return to their family homes. 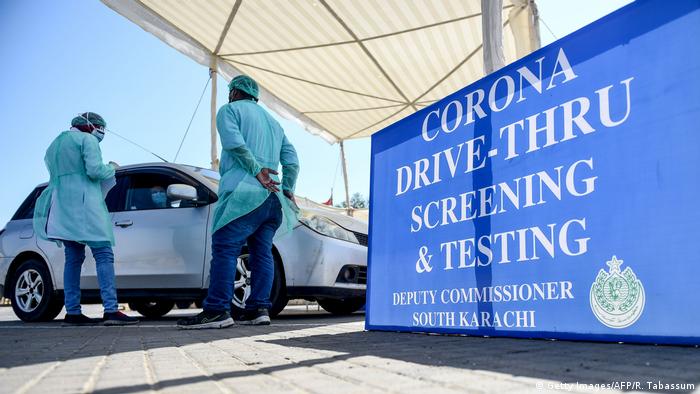 COVID has restricted people's mobility in many parts of the country

The coronavirus pandemic has made being LGBT+ in Pakistan significantly more difficult, in a country where those communities already face numerous challenges, including systemic oppression, social stigma and a legal ban on homosexual acts.

The colonial British government criminalized homosexual activities in India in 1860, establishing them as crimes that can result in life imprisonment or even death by stoning. Though these laws are seldom enforced by officials, as gay and queer activities remain largely clandestine, those identifying as LGBT+ rarely come out to their families.

When family members do come out or are found out to be queer, they face threats of violence and disownment. This is why some LGBT+ Pakistanis often move out of their family homes to pursue more freedom to explore their identity and sexuality. However, during the pandemic, exploration and independence have become increasingly perilous for some.

Usman, 32, who works for a multinational company in Abbottabad, a city slightly north of the capital, Islamabad, told DW that during the pandemic he has only managed to meet his long-distance boyfriend once every three months.

"My boyfriend is 25 and living with his family in Gujranwala, so he doesn't have the same freedom to leave his house," he said. "With the lockdowns and travel restrictions in place, our meetups have become more difficult."

Though Usman prefers monogamy, he and his partner have an agreement that they are free to explore physical relationships with other men, because of the nature of their long-distance relationship.

Such meetings are largely facilitated by social media, online groups and dating applications. Due to the pandemic, however, Usman said that usage of dating apps and the possibility of actual meetups have been considerably reduced.

"In the beginning of COVID, people were definitely more scared than they are now. I had a few people actually asking me for proof of negative tests on dating apps. I didn't have one at the time, so I moved on from them," he said.

During the fasting month of Ramadan, Usman said many men were also abstaining from casual sex and hookups, as many gay men negatively internalize their sexuality as something shameful or wrong.

"Families don't even acknowledge or dream that their son could be gay. If you are always with a man, he is just considered a friend," he said.

Though Usman has future plans to forge a life in Europe with his partner, other gay men in Pakistan face more challenges in finding love and feel that they have to settle for casual sex and dating.

Saad, 30, told DW that, as a single man, he findd meeting like-minded people and partners to be increasingly difficult, especially during the pandemic.

"Many people moved to their hometowns, and there were less meetings because so many locations were closed or heavily policed. So the risk of getting caught is so much greater too," he said.

Online dating has also suffered a few setbacks. Prime Minister Imran Khan banned the use of dating apps such as Tinder and Grindr earlier last year in order to curb "un-Islamic behavior." However, Saad said, there are lesser-known apps and VPNs through which users can still meet each other.

Dating app users have also found ways around the pandemic by offering more transparency about their health. Saad said some users updated their online status to "COVID recovered" or "vaccinated" in order to engage more potential mates in a safe and stress-free way.

"I just got vaccinated, so I, too, look forward to changing my status now," Saad said.

Domestic violence on the rise

Activists are concerned that the increased alienation and barriers to meeting people is negatively affecting mental health within LGBT+ communities.

Mani, a 36-year-old human rights defender, identifies as a transgender man. His organization called HOPE has carried out several studies on the impact of COVID on his community. He told DW that more cases of domestic violence among gay and transgender partners had been reported during the lockdowns, as the financial and emotional stress led to more clashes, especially for transgender women.

"Some trans women enjoy having a masculine boyfriend because he can make her feel more feminine and loved, but, during COVID, we saw that many women reported more domestic violence," Mani said.

LGBT+ communities have some of the highest rates of suicide in in Pakistan, as well as reports of self-harm and mental health problems.

Mani said communities had stigmatized themselves in some ways by reinforcing sexual identity as an act of defiance.

"Sex is a natural need, and, because our community is so marginalized, we talk about sex more openly among ourselves, which has stereotyped LGBT people as being more sexual," he said, stressing that this stereotype of being hypersexual can also create barriers to finding stable romantic partnerships.

Pakistan has more than 873,000 COVID-19 cases and over 19,000 deaths. On May 8, the government imposed a 10-day nationwide lockdown to curb the spread of the virus ahead of the Eid al-Fitr holiday.

Breaking down barriers for LGBT+ community through dance