Hard-line Islamists have been baying for blood after the Supreme Court overturned a woman's blasphemy conviction. Thousands of protesters had shut down major transport throughout the country. 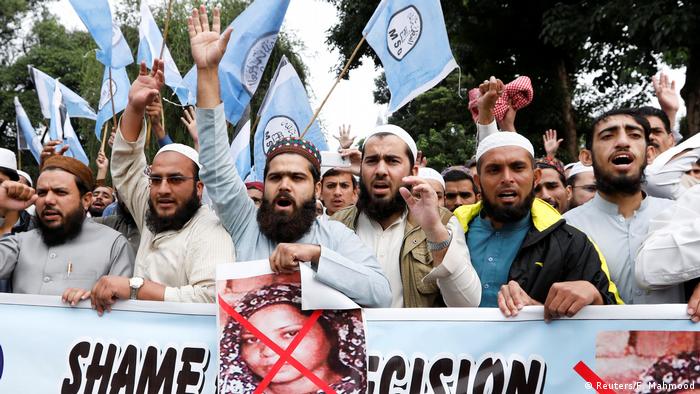 Pakistan's hard-line Islamists called off nation-crippling protests after striking a deal with the government on the legal future of a Christian woman acquitted of blasphemy.

What is the deal?

Government ministers and TLP officials confirmed to news outlets they had struck a deal, under which:

The regional prison chief told DW that Bibi had not been freed yet because his department had not received the Supreme Court's order directing her release.

"Right now, Asia Bibi is in jail and her location can't be disclosed for security reasons amid rabble-rousing by religious zealots demanding the court reverse its verdict."

Bibi's lawyer, Saif-ul-Mulook, told the Agence France-Presse news agency that the outcry by Islamists was "unfortunate but not unexpected." However, he criticized the government's inability to stem the violence and disorder, calling the official response "painful."

Mulook has left Pakistan for Europe, saying it was impossible for him to live in the country at present, citing threats to his life.

"I need to stay alive as I still have to fight the legal battle for Asia Bibi," he said.

Why are Islamists angry?

Blasphemy is a serious offense in the Islamic Republic. Bibi was originally sentenced to death for allegedly making derogatory remarks about the prophet Muhammad when a Muslim neighbor objected to her drinking from their glassware as she was not a Muslim.

The Supreme Court overturning her conviction was seen as a capitulation to foreign pressure and an affront to Islamic sensibilities.

What do they want? Protesters want the case reviewed — an often yearslong process — and her eventual public hanging. Despite the lengthy process, however, the court rarely reverses its own rulings.

Thousands of Islamist protesters have taken to the streets in Pakistan's cities, blocking roads and damaging infrastructure. They're opposing the release of a Christian woman accused of committing blasphemy. (31.10.2018)

In a landmark verdict, Pakistan's Supreme Court has acquitted Asia Bibi, a Christian woman who had been sentenced to death on blasphemy charges. The country's Islamists have vowed to protest against the ruling. (31.10.2018)