Asia Bibi′s blasphemy verdict: Islamists protest across Pakistan | Asia | An in-depth look at news from across the continent | DW | 31.10.2018

Thousands of Islamist protesters have taken to the streets in Pakistan's cities, blocking roads and damaging infrastructure. They're opposing the release of a Christian woman accused of committing blasphemy. 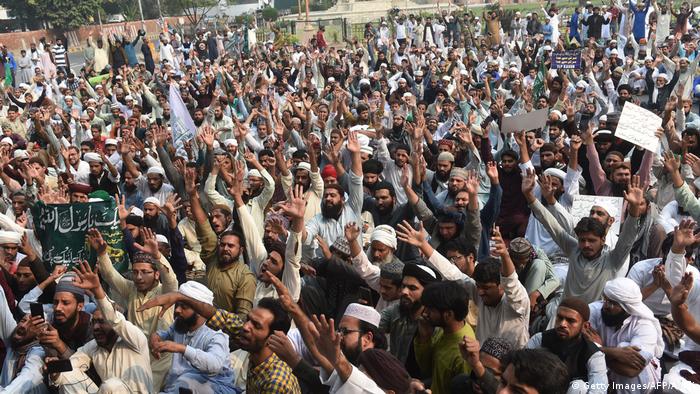 Protests rocked Pakistan's major cities on Wednesday after the death sentence of a Christian woman, Asia Bibi, on blasphemy charges was overturned by the country's Supreme Court. The protests are being led by hard-line Muslim clerics and ultrareligious Pakistani political parties like Tehreek-e-Labaik Pakistan (TLP).

The Pakistani government has deployed security forces to confront the protesters who are clashing with police, blocking roads with burning tires and damaging government properties. Residents in the capital, Islamabad, lined up at gas stations, fearing prolonged protests may hamper supply in the coming days.

In the eastern city of Lahore, TLP supporters began clashing with police immediately after the ruling. The Pakistani newspaper Dawn reported that a major railway line in Punjab province was blocked on Wednesday afternoon by TLP protesters, who said traffic will "remain blocked until Asia Bibi is hanged."

Dawn also reported that the TLP threatened to "block" the entire southern metropolis of Karachi, after closing off a major roadway in the city.

So far, there are no reports of death or injury resulting from the nationwide protests.

Islamists 'will not compromise'

"We will embrace death but will not compromise on our stance [against Bibi]," Pir Ejaz Shah, a TLP spokesman, told DW on Wednesday after the ruling.

The TLP's leadership also called for the death of Pakistani Chief Justice Saqib Nasir and two other judges on the panel that acquitted Bibi.

Asia Bibi had been living on death row since 2010, when she was sentenced to death by hanging after her neighbors accused her of insulting Islam.

Pakistan's Islamists fear the overturned sentence will spark widespread changes to blasphemy laws in the country. Insulting Islam is punishable by death in Pakistan, and Islamist parties draw much of their power from the enforcement of blasphemy laws.