Paintings Attributed to Hitler to Be Sold in UK | Europe| News and current affairs from around the continent | DW | 27.03.2009

Paintings Attributed to Hitler to Be Sold in UK

A group of 13 paintings supposedly done by Adolf Hitler will be sold at a British auction house next month. A previous grouping of Hitler paintings, sold two years ago, fetched twice their estimated value. 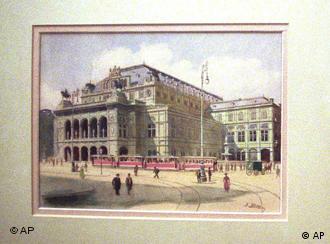 Among the 13 pieces to be sold on April 23 at the Mullock's auction house in Shropshire, England, is a self-portrait painted by Hitler when he was a young struggling artist living in Vienna. 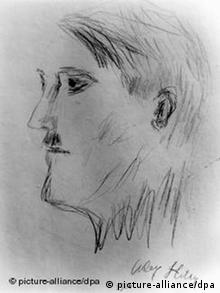 Before becoming leader of Nazi Germany, Hitler applied, and failed to get into, art school

The watercolor shows Hitler sitting pensively on a stone bridge, wearing a brown suit. His face lacks a nose and mouth, as well as the trademark square moustache.

But some art experts voiced doubts about the paintings' authenticity.

Richard Westwood-Brookes, a historical documents expert who will be holding the sale for Mullocks, told Reuters news agency that he's seen quite a bit of Hitler art and that all the subjects tend to be the same, explaining that Hitler liked to paint pictures of flowers, especially roses, and romantic landscapes with cottages.

Those doing the bidding in next month's auction will most likely be history buffs interested in Adolf Hitler as a historic figure. The paintings are mostly watercolors and signed with Hitler's initials.

"They're not exactly the greatest pictures in the world," Westwood-Brookes said, adding they could fetch between 400 and 1,000 pounds.

Westwood-Brookes said an Austrian expert had issued certificates of authenticity for the pictures, which once belonged to a British soldier stationed in Essen, Germany, in 1945.

The authenticity of Hitler's work has long been a bone of contention. In 1983, a British historian was taken in by diaries purportedly written by Hitler that became a sensation before turning out to be forgeries.

German Village for Sale on EBay

A German tattoo artist who offered his bald head as advertising space thought he'd found the perfect way to raise some cash. But even he's had to admit he was suffering from delusions of grandeur. (18.03.2009)

Versace Goes Under the Hammer

Just one month after the record-breaking auction of the belongings of Yves Saint Laurent, Sotheby's is selling the contents of the late Italian designer Gianni Versace's villa by Lake Como. (13.03.2009)