Bald Tattoo Artist to Sell Head Space | News and current affairs from Germany and around the world | DW | 18.03.2009

A German tattoo artist who offered his bald head as advertising space thought he'd found the perfect way to raise some cash. But even he's had to admit he was suffering from delusions of grandeur. 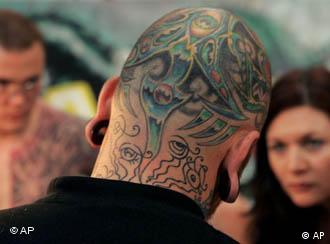 Down on his luck and with debts piling up, a tattoo artist from the German town of Coesfeld, racked his brain for a creative money-making scheme. Unfortunately, Thomas Tanriverdi's plan to sell ad space on his bald scalp went to his head.

Tanriverdi was hoping to rake in a whopping 50,000 euros ($65,700) from a bidder wanting to tattoo an ad on his pate -- that would have been enough money to pay off all his debts in one fell swoop.

Imagine his disappointment then, when after the first few days of bidding on a large online auction Web site, the highest offer was a sobering 355 euros. But rather than give up on his hare-brained scheme, Tanriverdi decided to downsize and aim for the considerably more modest sum of 500 euros for anyone willing to advertise on his head for a year. After all, he reasoned, it's not a totally untested market.

"Others have, with bravura, auctioned their skin for advertising purposes," the 30-year-old said.

In order to boost interest in his "product," Tanriverdi has now embellished his auction offer with a photo. The words "Your ad here" adorn an image of his shiny bald head.

It's pretty much the only space he had to offer. The rest of Tanriverdi's body is already decorated with over 30 tattoos, including a massive spider's web spreading over his neck.

But what kind of client is he hoping to attract?

"I don't mind what they want to put on there, as long as it's in earnest," he said. Up to now, the most interest has come from Internet shops and -- not surprisingly -- tattoo companies. 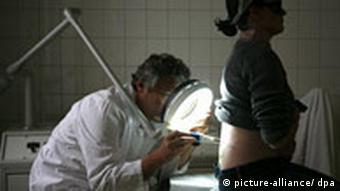 Lasering off a tattoo is not easy or painless

Customers looking for a bargain may want to take advantage of the price scale Tanriverdi has cleverly worked out. For 500 euros, he'll wear a tattoo on his head for a year. Starting from 4,000 euros, his scalp can be yours for three years. And anyone willing to spring for 18,000 euros or more can own the space until the end of Tanriverdi's life.

But a dermatologist at the University Hospital in Muenster has thrown a wrench in the works, warning that tattooing one's head with the intention of removing the artwork by laser and tattooing anew is not only painful, it's stupid.

"It's not like using an eraser," Nadine Peukert told German news agency DPA. "Afterwards, the skin will look different, and on the scalp, this could easily lead to scarring."

When Breaking out of Prison, Keep it Simple

When it comes to escape plans, one inmate's ploy to break free by hiding in the prison's rubbish is about as original as hiding a file in a birthday cake. However, sometimes sophisticated methods are over-rated. (21.11.2008)

EBay to Ban Sale of Cat and Dog Pelts in Germany

Internet auction house eBay will ban the sale of cat and dog pelts on its German language Web sites starting on Tuesday, July 15. (15.07.2008)

Making Money Out of Moss

What would you do with a piece of artificial hair from another person's head? The smart money would be on a quick trip to the garbage can. But some bright spark had the idea of spinning the threads into gold. (04.07.2008)