Paderborn back in Bundesliga after five rollercoaster years

Despite losing on the final day of the season, Paderborn sealed promotion to the Bundesliga. The team's return to the top flight completes a remarkable journey over the last five years. 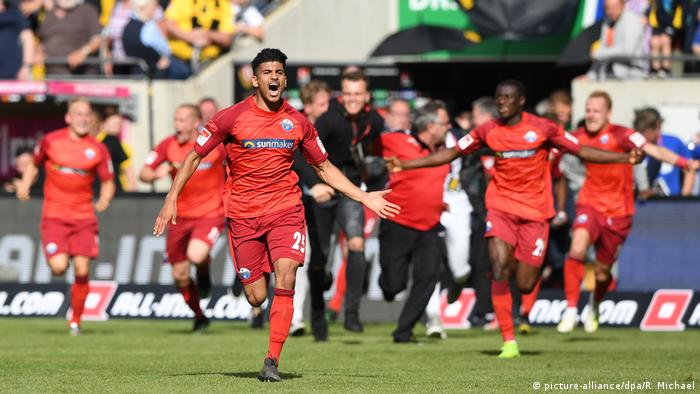 Few fans have enjoyed and endured more drama in the last five years than Paderborn's faithful. Three promotions, five head coaches and three relegations — two real and one avoided — in that time have made for quite the rollercoaster ride. And 729 days after facing life in the fourth division, Paderborn are back in the Bundesliga big time.

This year's promotion came despite a final day defeat to Dynamo Dresden. Fellow promotion hopefuls Union Berlin needed a win to take second spot off Paderborn, but they lost in Bochum and will play Stuttgart in the promotion playoff spot.

A great home record has been the base for Paderborn's return to the Bundesliga (10 wins, six draws and just one defeat), as well as being on the right side of some wild results. A 5-3 win over second division champions Cologne, two wins with six goals scored and two 4-4 draws is the reason Paderborn perhaps best embody one of the most unpredictable leagues in the world.

The rollercoaster started back in 2013, when Paderborn turned a slow start into an unlikely promotion to the Bundesliga, sparking wild scenes among fans and players. The financial boost helped put the club in better health, but there wasn't much left to spend on recruitment. Andre Breitenreiter, head coach at the time, stayed true to form and kept Paderborn playing attacking and brave football. That start earned them respect and even saw them top the league at one point, but things changed after the winter break. The drama went down to the final day, but relegation followed. 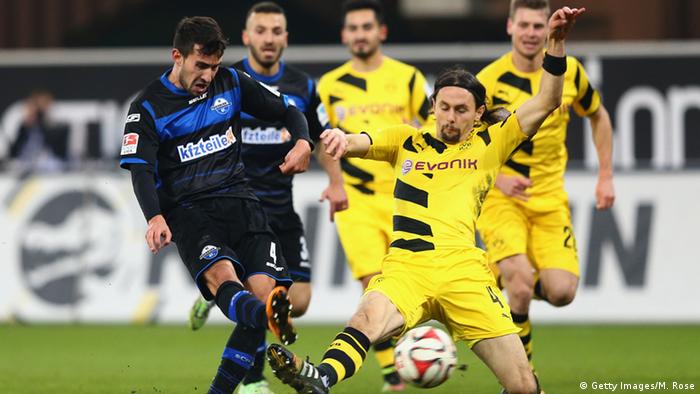 Paderborn hosting Borussia Dortmund back in 2014

Paderborn — where the coaches come and go

After relegation was confirmed, so was Breitenreiter's departure. The team broke apart, the appointment of Markus Gellhaus didn't work. Neither did his successor, Stefan Effenberg. The former Germany and Bayern Munich midfielder brought attention and interest, but the team failed to blossom another promising start. Effenberg's time in charge ended after more drama. Despite the appointment of youth academy coach Rene Müller, Paderborn tumbled to another relegation.

The struggle continued in the third division. More players left, the defense leaked a record number of goals and another coach came and went. The return of club legend Markus Krösche though, was a key moment. Krösche returned in a managerial position and found a coach who was willing to take on the increasingly-likely possibility of coaching in the fourth division.

Steffen Baumgart took the job and suddenly Paderborn looked alive again. A draw on the final day wasn't enough though as results elsewhere condemned them to relegation. However, perhaps the greatest turning point in the club's history came when 1860 Munich's controversial owner refused to pay the funds needed for the club's third division playing license. This forced 1860 down to the regional fourth division, leaving Paderborn in the third.

"We've managed to stay in the league with two black eyes and a broken jaw. We are very lucky," Krösche said after the news.

Battered and bruised, but smiling with fortune, Paderborn's resurrection began. Krösche and Baumgart formed a formidable team and they raced to the top of the third division with a record-breaking attack. Promotion was sealed and then, despite a poor showing in Dresden, another followed in 2019.

With Paderborn, that good thing will feel great after the drama of the last five years.