One tiny Pacific nation has begun the new year with a ban on sunscreens that contain chemicals which affect the health of coral reefs and fish. "Environment is the nest of life," Palau's president said. 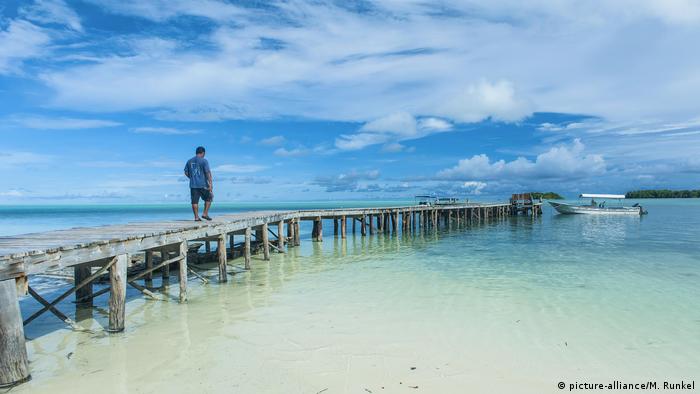 The new law banned the sale and use of sunscreens containing any of 10 ingredients, including oxybenzone and octinoxate, which are known environmental pollutants, according to the International Coral Reef Foundation.

"We have to live and respect the environment because the environment is the nest of life, and without it nobody in Palau can survive," President Tommy Remengesau, who originally signed off the law in 2018, told AFP news agency.

The tiny island nation lies in the west of the Pacific and has a population of around 17,000, but enjoys a vibrant tourist industry largely based around the famous coral reefs and diving. Remengesau said there was scientific evidence that the chemicals found in most sunscreens were toxic to coral reefs.

A new marine sanctuary also came into effect on Wednesday, closing 80% of the ocean surrounding the island to fishing, 500,000 square kilometers (190,000 square miles) in all.

Palau made headlines in 2017 for having tourists sign an "eco-pledge" before visiting, stating "I vow to tread lightly, act kindly and explore mindfully."

What are 'toxic sunscreen ingredients?'

"Toxic sunscreen chemicals have been found throughout Palau's critical habitats, and in the tissues of our most famous creatures," Remensgesau said.

Many of the banned chemicals are endocrine disruptors, meaning that they have a negative impact on the juvenile development of most coral and many fish and algae species.

"When science tells us that a practice is damaging to coral reefs, to fish populations, or to the ocean itself, our people take note and our visitors do too," Remengesau added.

Read more: Going wild: The impact of tourism on nature

The US state of Hawaii will be the next territory to ban these chemicals, with Remensgesau saying he hoped Palau would be the "first of many." Hawaii's ban comes into effect in 2021. The US Virgin Islands in the Caribbean have also announced a ban.

Many sunscreen manufacturers were quick to identify their products as "reef-safe" as the toxic effects of traditional sunscreens became more widely known. Non-toxic sunscreens are now widely available.

Snorkeling in School - Lessons on Palau