Uganda wants to begin compulsory HIV/AIDS testing of students due to the rising number of new infections. The proposal has raised concerns over privacy. 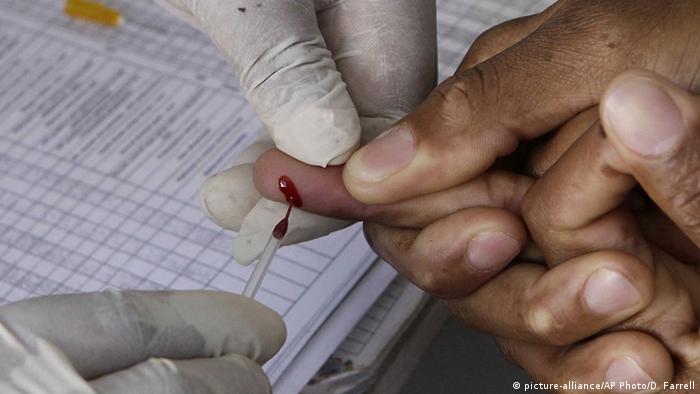 19-year-old Methia Nalukwago, a student at Makerere University in the capital Kampala, is excited by the proposal to have all students undergo compulsory HIV/AIDS testing. Some students, she says, have been living in denial.

"Our friends, we study with them but you look at someone and you are like, 'are you sure you are not sick or something like that?' Of course you never come out to tell them but you feel it deep down inside you, this person must be sick because of the symptoms that show," Nalukwago told DW. "Compulsory testing for HIV will help us know our HIV status and where we stand."

HIV on the rise

Studies conducted by the Ugandan AIDS Commission show lack of sufficient information among the youth is contributing to an increase of HIV.

Jane Were, the head teacher of Forest Hill College in Mukono district located 21 kilometers (13 miles) east of Kampala, said they are grappling with HIV in schools. She said the situation has been made worse by parents who mislead their children on what they are actually suffering from. "We have situations where parents lie to students about these [anti-retroviral] drugs. There are parents who tell children they have other ailments other than HIV," Were said.

For Henry Atiku, a parent, the idea of conducting compulsory HIV tests for young people could bring about other problems. He doesn't understand what how the tests will benefit those who are HIV positive. "That means they are making compulsory testing not necessarily for statistics but to find a way of handling those who have HIV and these kids will know and stigmatize or actually bully their colleagues."

Government to work with parents

State Minister of Health for General Duties, Sarah Opendi, said the policy would not allow testing children without parental consent. She emphasized that the exact process of how and when to test the students still needs to be agreed on before embarking on compulsory testing. Nonetheless, Opendi insisted that the plan is necessary to stop the spread of HIV.

"We have seen children even thinking of committing suicide. It's not just testing, we need to counsel these children and let them know that you can have the virus but still live a positive life," Opendi told DW.

Approximately 1.3 million Ugandans are living with HIV and about 800 contract the virus every week, an average of 5 people every hour. However, Patrick Ojilong of Action Group for Health Human Rights and HIV/AIDS Uganda, an organization that speaks for the rights of people living with HIV, believes this move, if implemented by the government, will infringe on individual rights to privacy. He also warns that such a policy could eventually have a negative outcome. "If you say compulsory, it means a health worker can come to a school with or without your consent. He has the policy mandate to draw your blood and test for HIV immediately," Ojilong told DW.

"If you do it with the compulsory mindset how will you be certain that [students] will adhere to the treatment?"

The Uganda Aids Commission says compulsory testing would help students know their HIV status thereby making it possible to start treatment. Reuben Twinomujuni, head of advocacy argues that the new policy would immensely help the country in its fight against HIV/AIDS.

"The majority of the people who are affected by the virus are the young people if there was such a [compulsory testing] policy it would help reduce some of these infections."

Teenage girls are unfairly bearing the brunt of the AIDS crisis, a UNICEF report has found. A lack of information, campaign fatigue, and sexual violence are partly to blame. (25.07.2018)

The International AIDS Conference has warned that advances in fighting the spread of the HIV virus must not be undermined. Stigmatizing those who have contracted the virus is dangerous and wrong, says Astrid Prange. (27.07.2018)

A world AIDS conference has opened in Amsterdam to discuss educating and treating those populations most at risk from the condition. Experts have warned that new HIV infections have surged in some parts of the world. (23.07.2018)