What are the tastes of Academy Award voters? DW took a look at the tropes shared by Best Picture nominees to find out. Dramas based on a true story are popular — but alcoholics are quite successful, too.

Read this article in Chinese or German.

If ever you hope to become one day the winner of an Academy Award, here's our piece of advice: Find a dramatic event from the news or a noteworthy historical event and turn it into a story. Nothing has more pull at the Oscars than a heartbreaking filmed version of true events.

Most importantly, emphasize the drama. Among all eligible films for an Academy Award, dramas have had a stronger tendency to be nominated and to go on to win Best Picture. 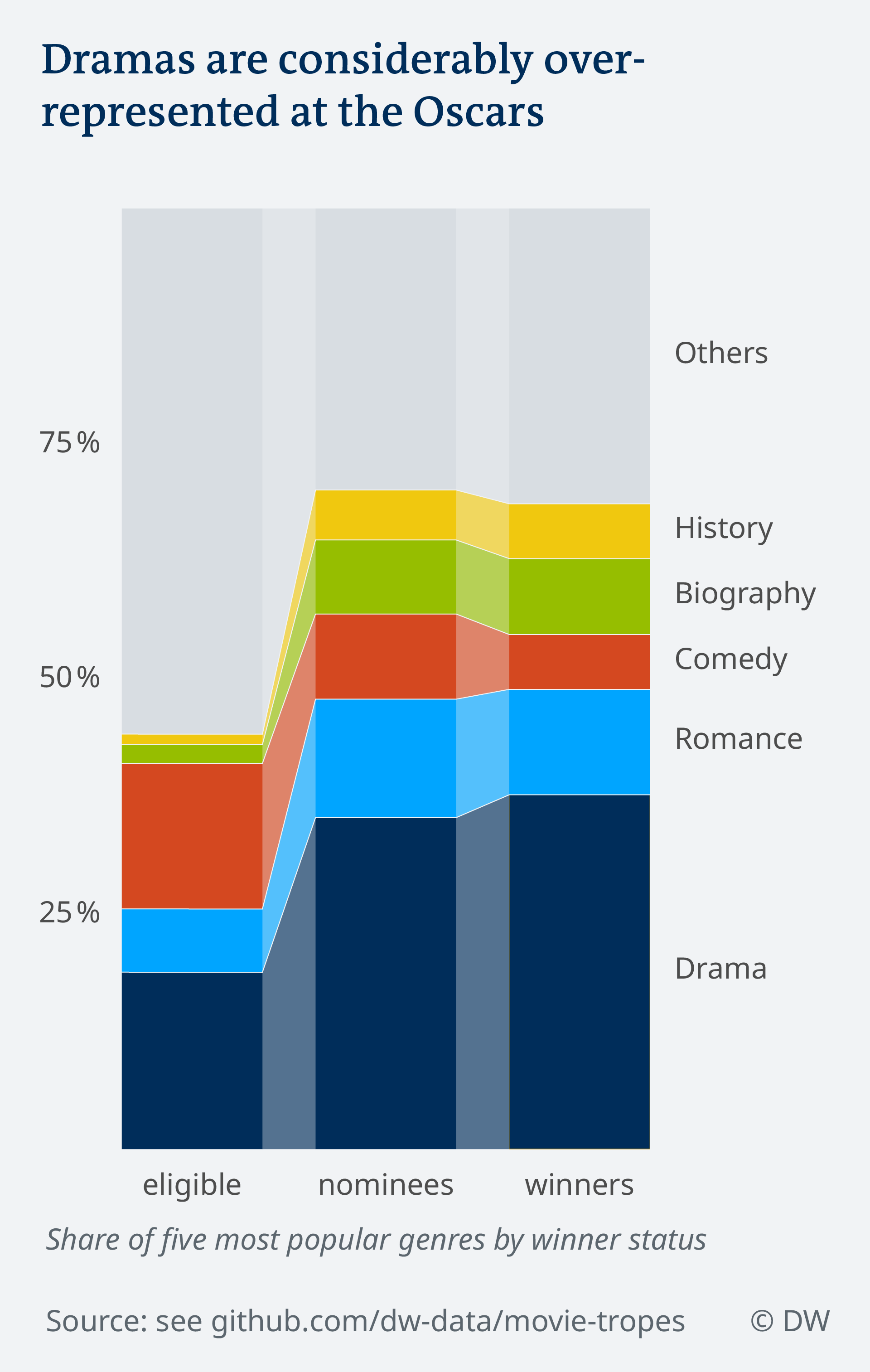 The graphic shows that dramas make up 19 percent of films eligible for an Oscar, but they have scored 38 percent of the Best Picture Oscars. The other way around, only a small proportion of all comedies have ended up with the top golden statuette.

What are the other winning elements to conquer the voters of the Academy of Motion Picture Arts and Sciences?

For one thing, if facts surrounding a true story are distorted a bit, that will not disturb them too much. Clint Eastwood's 2014 biographical war drama, American Sniper, is loosely based on the memoir of military marksman Chris Kyle, and some characters are simply pieced together. It obtained a Best Picture nomination. 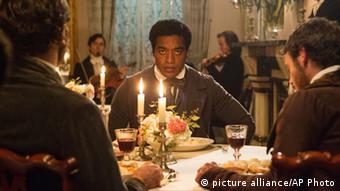 For dramatic purposes, the 2013 period film 12 Years a Slave shortens the lawsuits surrounding the origins of Solomon Northup, the author of the memoir from 1853. It nevertheless won the Oscar for best film.

DW's analysis looked into data available on TVTropes.org, a wiki through which contributors collaboratively identify recurring narrative tropes, not only in films, but also in video games and other works of fiction. Their work was used to identify factors that statistically influence a film's chances of being nominated for an Academy Award in the best film category.

A total of 2,682 films eligible for the Oscars since 2000 and which have been analyzed by TV Tropes collaborators were included in DW's data analysis to outline trends in the Academy's tastes for the last 20 years.

On TV Tropes, users will point out — often with a touch of irony — how often characters end up happily married, note various scenes referring to other movies or pinpoint all the cases in which the butler turns out to be a murderer. Users can collect various examples and create new pages to present their tropes. Some of them are quite surprising: There's for example a page compiling depictions of sushi being served on a (usually female) body, one for all stories featuring summer camps where fat children are sent to lose weight, while another one is titled "The Capital of Brazil is Buenos Aires," listing everything that is wrong with Brazil in fiction. 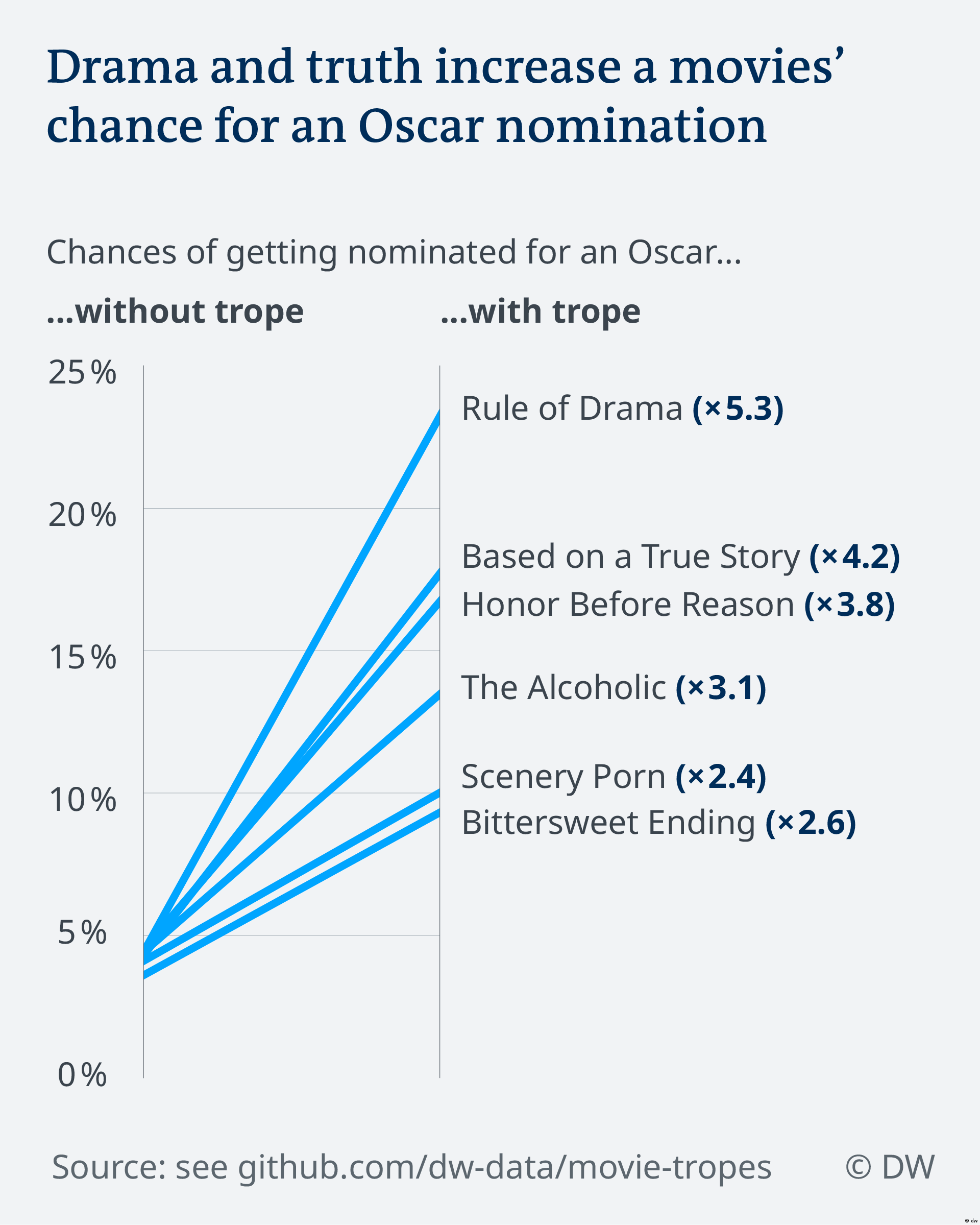 The TV Tropes page "Honor Before Reason" lists scenes in which honor and pride have more value than any practical solution. That approach also seems to please the Academy. Such films are at least four times more likely to be nominated for an Oscar than those that don't promote this code of ethics.

Films with a bittersweet ending are also popular options. Their chances of obtaining a nomination are three times as high as those with another conclusion. 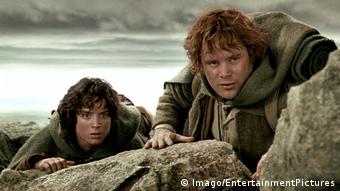 A tragic end: Frodo will leave his friend Sam for the Undying Lands

For example, the final installment of Peter Jackson's Lord of the Rings trilogy ends with Frodo leaving his friend Sam and Middle Earth, to heal the spiritual wounds caused by the Ring in a symbolic afterworld. That visibly impressed the Academy; it won Best Picture in 2004.

Drama and tragedy are good, but elements of kitsch and warm feelings should also be included. A happy wedding scene is one motif that increases chances of a nomination for Best Picture. 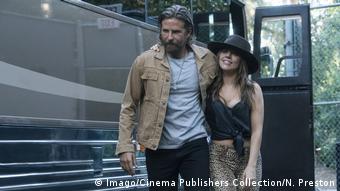 A singer with an alcohol problem: Jack Maine (Bradley Cooper) in 'A Star Is Born'

Alcohol is another secret ingredient.

Among the eight nominees for best film this year, four of them have alcoholics as main characters, as TVTropes.org users have pointed out. In A Star Is Born, singer Jackson Maine (Bradley Cooper) drinks his way into ruin. In Green Book, Mahershala Ali portrays a talented pianist who likes to drink a bottle or two of Cutty Sark whisky. Ku-Klux-Klan member Ivanhoe is constantly drunk in BlacKkKlansman and in Vice, Dick Cheney and President George W. Bush both have an alcohol problem.

That list doesn't even include the excessive partying in Bohemian Rhapsody or drinking out of loneliness and frustration in Roma, two other films nominated for Best Picture. 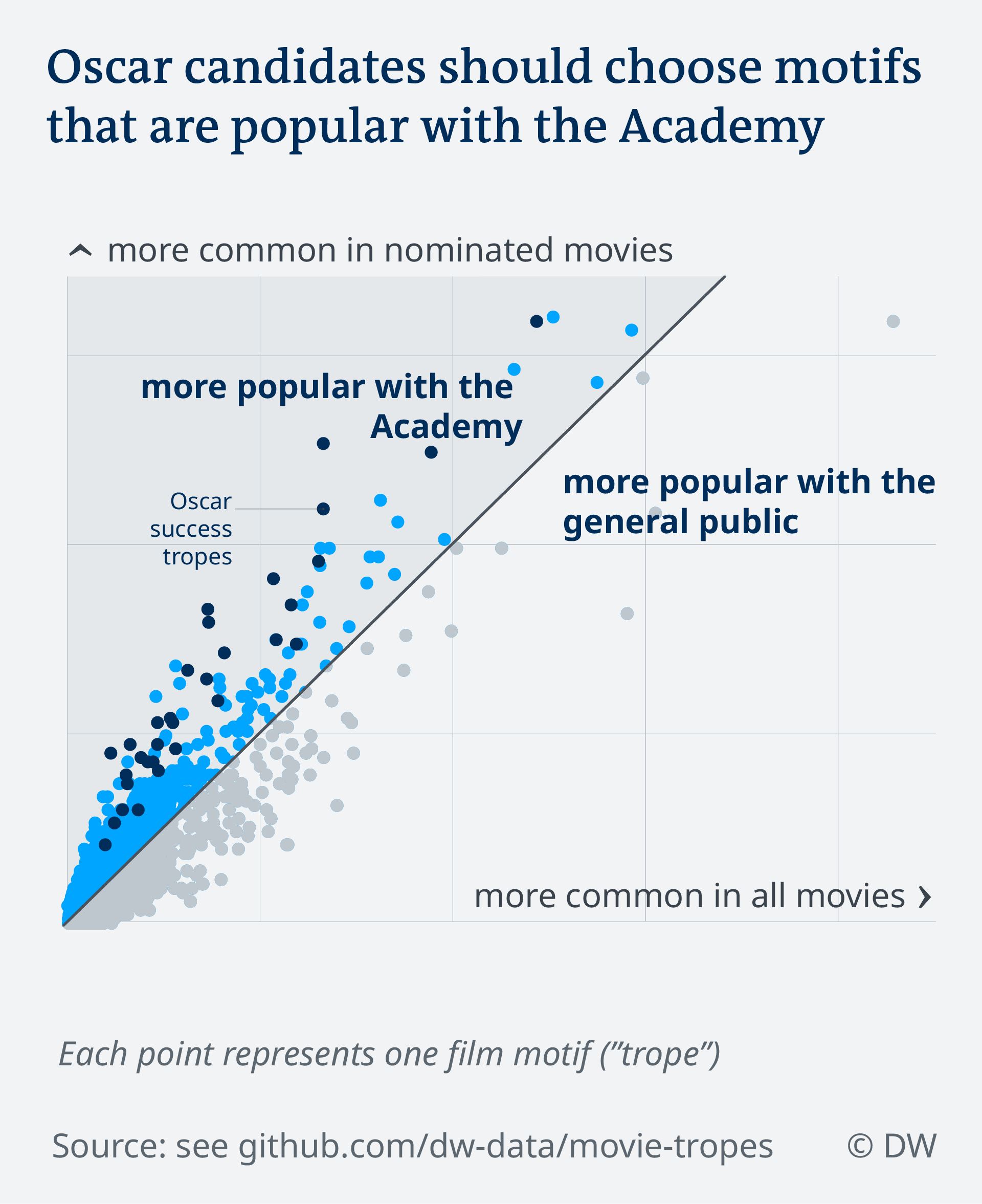 Drama is not everything

While a bittersweet drama based on a true story featuring an alcoholic in breathtaking landscapes has increased chances of getting a nomination, there are however no specific tropes that statistically improve chances for these films to actually win the Oscar.

The content of the film may increase chances of a nomination, but there are other conditions that need to be fulfilled to be eligible in the Best Picture category. A work must have been screened during the previous year in theaters in Los Angeles County for at least seven days in a row. That's why Netflix organized a limited theatrical run of Roma ahead of its release on its streaming platform.

The release date of a film also plays an important role. The chances of getting an Oscar nomination increase when a film is released later in the year, as US sociologists Gabriel Rossman and Oliver Schilke found in their 2014 Oscar study. That way, a film is still fresh in the minds of the estimated 8,200 Academy members (the exact list and numbers are kept secret). The nominations are revealed in January and producers have until shorty before the awards ceremony to campaign for their contenders.

The promotional budget of a film also plays an important role in Oscar success. According to the New York Times, Netflix is reportedly spending as much as $20 million on its Oscar campaign, making it the priciest one since The Social Network (2010).

So beyond the drama and landscapes, a huge budget is still unavoidable to make it in the Oscar race.

Oscars 2019 ceremony to take place without a host

The awards night was left lacking a compere after comedian Kevin Hart pulled out following criticism of past homophobic statements. It's not the first time that Hollywood's biggest night will take place without a host. (06.02.2019)

The Oscar nominations were announced today in Hollywood, with blockbusters like "A Star Is Born" and "Black Panther" up for a swag of major awards. But "Roma" and "The Favourite" topped the nominations with 10 each. (22.01.2019)