Oscars 2018: Best picture goes to 'The Shape of Water'

All of Hollywood was waiting to see how Jimmy Kimmel would open the 90th annual Academy Awards. Would he deal with the sexual harassment scandals? Yes, he did.

The late-night host specifically mentioned the disgraced film producer Harvey Weinstein by name and said he deserved to be expelled from the academy. He joked that the Oscar statuette is the ideal embodiment of the moment — "as he always keeps his hands where we can see them."

Kimmel also acknowledged the #MeToo and Time's Up movements against sexual misconduct and gender inequality, a major theme of the evening. He told the audience that we are living in a moment of cultural reckoning for inclusivity and sexual misconduct and that the industry couldn't turn a blind eye to bad behavior anymore. "The world is watching us," he said.

Read more: 90 years of the Oscars

The best picture award went to "The Shape of Water," a film nominated in 13 categories. Director Guillermo del Toro dedicated his win to all young filmmakers around the world. He reminisced about being a young boy in Mexico and dreaming of one day being at the Oscars. "Growing up in Mexico, I thought this could never happen," del Toro said. "It happens." He also took home the prize for best director, and the film was honored with a total of four awards. 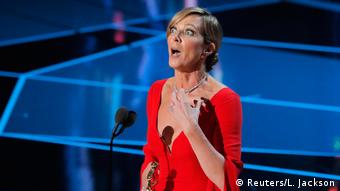 Allison Janney won the award for best supporting actress, for her role in 'I, Tonya'

Gary Oldman won best actor for his portrayal of Winston Churchill in "The Darkest Hour."

"I would just like to salute Winston Churchill, who has been marvelous company on what can be described as an incredible journey," Oldman said while accepting his award for best actor.

The best actress award in a crowded field of talented women went to Frances McDormand for her role of a grieving mother in "Three Billboards Outside Ebbing, Missouri." During her acceptance speech, she had all the women nominees and winners stand up and take a bow, and pushed for more funding for their projects. McDormand's speech, which called for stars to request an inclusion rider that will increase diversity on the film set, struck a chord with many who are pushing for more and greater representation. The idea, originally proposed in 2016 by the USC professor Stacy Smith, comes after data revealed that female nominees in categories such as best director and best cinematography have been sorely lacking in the Oscars' 90-year history.

In a category filled with amazing performances, the winner of the statuette for best supporting actress was anyone's guess. Allison Janney ultimately won for her performance as the figure skater Tonya Harding's mother in the film "I, Tonya." The best supporting actor award went to Sam Rockwell for "Three Billboards Outside Ebbing, Missouri." 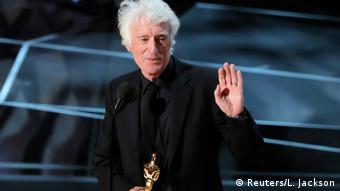 After 14 nominations, Roger Deakins won his first Oscar for cinematography for "Blade Runner 2049"

The award for documentary feature was given to "Icarus," which exposed the state-sponsored doping of Russia's Olympic athletes. Best foreign film went to Chile's "A Fantastic Woman," the story of love and loss starring the transgender actress Daniela Vega, which was a hit at the 2017 Berlinale. Pixar's colorful ode to Mexican culture, "Coco," won best animated film, as well as best song for "Remember Me."

"The biggest thank you of all to the people of Mexico," said "Coco" director Lee Unkrich. "Marginalized people deserve to feel like they belong. Representation matters."

Germany was represented at the Academy Awards by Gerd Nefzer, who won an Oscar in the visual effects category for "Blade Runner 2049."

"It's a great moment in my life," he said, speaking to reporters backstage. "I never thought I would make it as a German special effects artist at the Oscars. It's incredible, I still can't believe it."

'Time's Up is not about the red carpet'

Unlike the Golden Globes' "blackout," when women wore black dresses to protest sexual misconduct, there was no similar movement on the Oscar red carpet.

"It's really important that you know that Time's Up is not about the red carpet," the powerhouse Hollywood producer Shonda Rhimes ("Grey's Anatomy," "Scandal") said ahead of the ceremony.

Instead, three actresses who had accused Harvey Weinstein of assault — Ashley Judd, Salma Hayek and Annabella Sciorra — were called on stage ahead of a video about the changes in the industry toward greater diversity and post-#MeToo.

Before he was thrown out of the film academy after a tsunami of sexual harassment and sexual abuse allegations, Weinstein was central to the Academy Awards over the past two decades. Indeed, one study claimed that Weinstein was thanked more often than God in acceptance speeches.

Tradition was also broken in another manner. Typically the previous year's best actor winner would present that statuette, but Casey Affleck, who won the award in 2017 for "Manchester by the Sea," withdrew amid a pair of sexual harassment accusations, which he has denied. In his place, Jodie Foster and Jennifer Lawrence presented the best actress award.

Call Me by Your Name
Darkest Hour
Dunkirk
Get Out
Lady Bird
Phantom Thread
The Post
The Shape of Water
Three Billboards Outside Ebbing, Missouri

Actress in a leading role

Actor in a leading role

"Mighty River" by Mary J. Blige, Raphael Saadiq and Taura Stinson (Mudbound)
"Mystery of Love" by Sufjan Stevens (Call Me by Your Name)
"Remember Me" by Kristen Anderson-Lopez and Robert Lopez (Coco)
"Stand Up for Something" by Diane Warren and Lonnie R. Lynn (aka Common) (Marshall)
"This is Me" by Benj Pasek and Justin Paul (The Greatest Showman)

Actress in a supporting role

Actor in a supporting role

The infamous Razzie Awards have been announced, with voters from around the world deciding on the worst movie flops of 2017. "The Emoji Movie" — an animated film staring Sir Patrick Stewart — was picked as worst picture. (03.03.2018)

Actor Willem Dafoe: 'Germany has changed so much'

Willem Dafoe has played a wide array of roles and has been nominated for best supporting actor at this year's Academy Awards, but the actor also has a special connection to Germany. DW spoke with him in Berlin. (02.03.2018)