The world promised Yemen only half the aid it needs. Yet at the same time, arms sales to the warring factions are thriving. What is needed now is an arms embargo, writes Matthias von Hein. 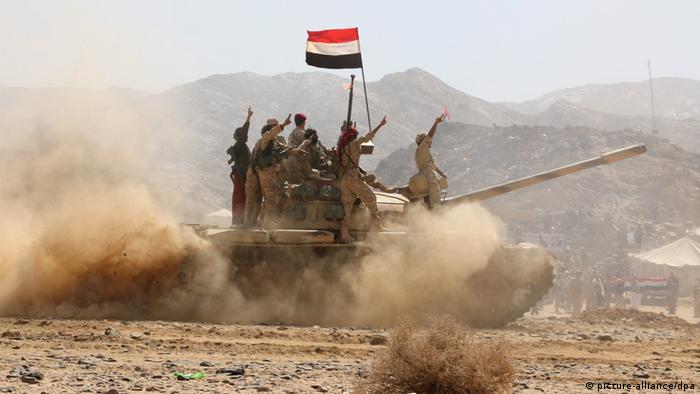 Every 10 minutes, a child dies in Yemen - of preventable causes. After the Yemen donor conference, no one will be able to claim ignorance in this regard.

The meeting in Geneva has, at least for a very brief moment, drawn attention to the world's greatest humanitarian crisis. By the end of the conference, almost 50 percent of the aid required by the UN to avert imminent mass starvation this year had been pledged.

Sure enough, that's an achievement - previously, the figure had been 15 percent. But even though every dollar, every euro raised is important, had the fundraising really been a "remarkable success" - UN Secretary General Antonio Guterres' assessment of the donor conference results - it would have had to raise all of the required $2.1 billion (1.93 billion euros), and not just half that amount.

Hunger as a weapon

The primary reason is because the worst famine in the world today has been man-made, for the most part. It's because of war that one third of Yemenis are starving and two thirds of the country's people depend on relief supplies.

It is a war that sees hunger used as a weapon. It is a war that, only after the Saudi-led coalition intervened two years ago, escalated ethnic conflicts that had simmered for decades into a disaster.

If nothing else, it is a war which generates huge profits - also for those who pledged relief money in Geneva: In 2015, when the wealthiest country in the Arabian peninsula started to bomb the poorest country in the region back to the stone age, arms worth in excess of 1.8 billion euros ($1.96 billion) were exported from the European Union to Saudi Arabia.

In 2016, the German Ministry of Economy issued export licenses for weapons sold to Saudi Arabia worth more than 500 million euros ($544 million). This makes Germany a participant in this very dirty war.

Matters are not helped by the fact that Great Britain, France and especially the US are also among those who, acting resourcefully and displaying high levels of entrepreneurial flair, make sure that the Saudi arms, bombs and missile depots remain fully replenished, despite constant deployment on a massive scale.

Truth be told, the coalition of the Houthi rebels and forces loyal to former president Ali Abdullah Saleh is also fighting this war without any regard for the civilian population. However, one of the main causes of Yemen's famine is the continuing Saudi-led naval blockade of Yemeni ports. The situation could even become dramatically worse because the Saudi-led coalition plans to launch an offensive against Hodeida, a Red Sea port held by the Houthi-Saleh bloc.

Hodeida, the eye of the needle

That port's capacity has been dramatically reduced already due to Saudi airstrikes. In spite of that, it is still the central hub when it comes to supplying Yemen with food and relief aid. If the port comes under attack, the current mass starvation would turn into a death trap.

The coalition's argument - according to which Hodeida must be seized in order to halt arms supplies to the Houthi-Saleh bloc and force them to the negotiating table - is not convincing: the UN special envoy's recent peace initiative was rejected by the Saudi-backed government of exiled president Hadi. And all ships approaching the port have been inspected by the coalition for quite some time already.

In this war, there can't be any military victory - this insight was even shared by US Defense Minister James Mattis when he visited Riyadh recently. Those who care about the people of Yemen must, therefore, bring the warring parties to the negotiating table. To this end, pressure must be put on Riyadh, which, thus far, has rejected everything that didn't amount to a capitulation of the Houthi-Saleh alliance. In this situation, an arms embargo targeting Saudi Arabia could be a start that's long overdue.

Putin: Russia open to hacker exchange with US 1h ago

Opinion: Pakistan is pursuing an unrelenting assault on journalism 4h ago