HRW has accused Houthi rebels and their allies in Yemen of using banned landmines. The use of landmines threatens the return of millions of displaced people to their homes. 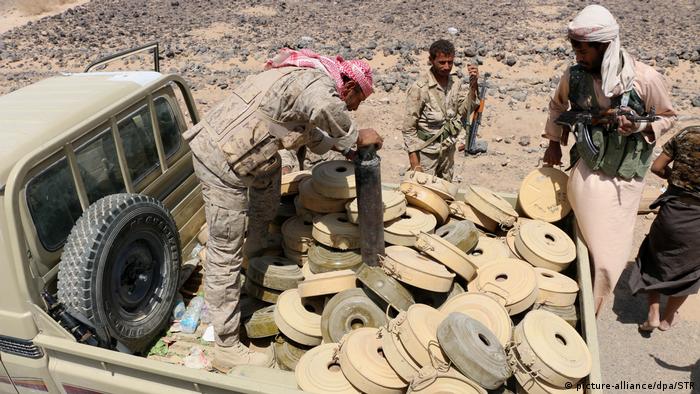 Houthi forces and their allies have been using banned landmines in war-torn Yemen, causing hundreds of civilian casualties and threatening the return of millions of people displaced in the country, Human Rights Watch said Thursday.

The New York-based human rights organization said in a report that Shiite Houthi rebels and allied forces loyal to former President Ali Abdullah Saleh have used landmines in at least six governorates in violation of the country's commitment to the international Mine Ban Treaty.

"Houthi-Saleh forces have been flouting the landmine ban at the expense of Yemeni civilians," said Steve Goose, director of the Arms Division at Human Rights Watch. "Yemen prohibited antipersonnel mines nearly two decades ago and no authorities should tolerate their use."

Houthi rebels from the north took control of the capital Sanaa and other parts of Yemen in late 2014 before forcing the internationally recognized government to flee.

A Saudi-led coalition of Sunni states, which is backed by the United States, launched a military intervention in March 2015 to restore President Abed Rabbo Mansour Hadi to power and counter Iranian influence over the Houthis.

After pushing back Houthi forces from the southern port city of Aden and some other parts the frontlines of the conflict have largely remained static in recent months.

The Saudi-led coalition has also been accused of carrying out human rights abuses and possibly war crimes, including indiscriminate bombings that have destroyed infrastructure, homes, schools and hospitals.

Citing local anti-landmine organizations and the Landmine Monitor Initiative of the International Campaign to Ban Landmines, Human Rights Watch calculated more than 1,000 people have been killed or wounded by landmines since the conflict began.

More than 7 million people face the risk of starvation in the next months if they don't receive food assistance, while 19 million people - two-thirds of the population - are in need of humanitarian aid, according to the UN.

The use of landmines, which can take decades to remove, threatens the long-term return of civilians to their homes and the use of agricultural land.

"The Houthi-Saleh forces' use of banned landmines is only going to prolong Yemen's eventual recovery from this bloody conflict," Goose said.

A device to end the scourge of landmines

People die or lose limbs daily from stepping on landmines. Most of the victims are civilians, many years after the end of a conflict.German experts have now come up with a fast, efficient landmine detection method. (02.03.2016)

Two years ago, a tribal conflict in Yemen widened into a full-scale war after intervention by Saudi Arabia. Today, two-thirds of the population is starving. The world can no longer look away, says DW's Matthias von Hein. (01.04.2017)

The men who risk their lives to demine Bosnia