The COVID-19 pandemic shows that we've got our security priorities wrong. Virus outbreaks, after all, cannot be contained by military force. Time for a security rethink, says Miodrag Soric. 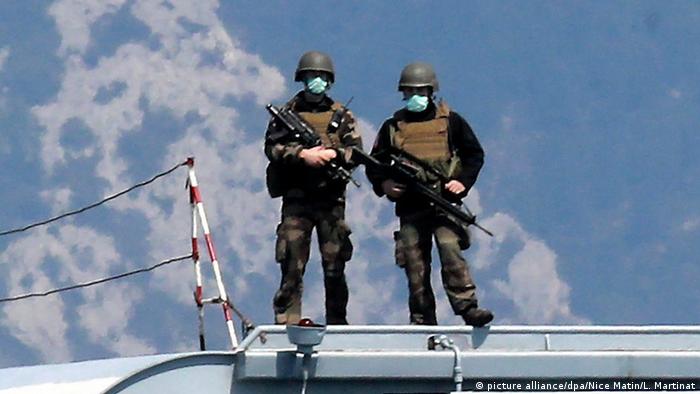 Keeping citizens safe is the greatest responsibility of any state. Citizens can only enjoy free, dignified lives when they are secure. And economic prosperity, too, depends on security being maintained for all. But that is easier said than done. The ongoing coronavirus pandemic shows how well or, indeed badly, different states are managing this outbreak. And, more importantly, how prepared they were for such a crisis.

Many officials say nobody could have seen it coming. But since 2003, we have witnessed the SARS, swine flu, MERS, Ebola and Zika virus outbreaks. Governments, in others words, had ample time to prepare for the possibility of a pandemic. But leaders in the Northern Hemisphere got their priorities wrong, investing billions in arms instead of readying emergency services for a potential disaster scenario.

Tanks, fighter planes and aircraft carriers — where many crew members have fallen ill with the coronavirus — are useless against a pandemic. The world's mightiest army simply will not keep us safe. On the contrary, increased defense spending has often led to states diverting money away from health care systems, infrastructure networks and environmental protection measures.

It's a sentiment echoed by former US President and Army General Dwight D. Eisenhower, who in 1953, in the early days of the Cold War, said:

"Every gun that is made, every warship launched, every rocket fired signifies, in the final sense, a theft from those who hunger and are not fed, those who are cold and are not clothed. This world in arms is not spending money alone. It is spending the sweat of its laborers, the genius of its scientists, the hopes of its children."

After the 9/11 attacks, the US beefed up its armed forces, waging war against radical Islamists abroad — both real and imagined. Now, in hindsight, the Twin Tower attacks may seem almost trivial compared to the scores dying from COVID-19 in the United States, let alone the rest of the world.

Just to be clear: Of course every country needs an army to protect its citizens from external attacks. And the US fleet, for example, plays a key role in securing global trade routes. But the US and other nations have failed to recognize the biggest threats to our safety: pandemics, climate change and environmental destruction.

Leaders have underestimated those threats and still do so now. Besides, the current pandemic may also precipitate food riots, especially in Africa and parts of Asia.

Once again, there are calls in the US to go down the road of isolationism, and stay clear of all the world's crises and wars. But viruses and climate change don't care for national borders. And protectionism also does little to help; it harms a nation's export industry, suppressing economic growth and ultimately forcing people into poverty. The ramifications could be far worse than the virus outbreak itself.

The pandemic we are facing has made abundantly clear just how globalized our world is today. Something happening in faraway countries can swiftly spread and affect people across the globe.

Globalization is here to stay. That means the global community must cooperate. And for this to work, rich countries in the global North, chiefly the US, must take leadership and show they have learned from past mistakes. Only then can our world become a safer place for all.

How the German military is fighting coronavirus

The German military has had to show some flexibility to combat the coronavirus outbreak. The Bundeswehr is also increasingly being asked to protect civilians, as well as its own troops. (26.03.2020)