Opinion: We must resist the perverse logic of religious terrorism

The death toll from the terrorist attacks in Sri Lanka continues to rise. While anger and grief are understandable reactions, calling for revenge is exactly what the perpetrators want, says DW's Felix Steiner. 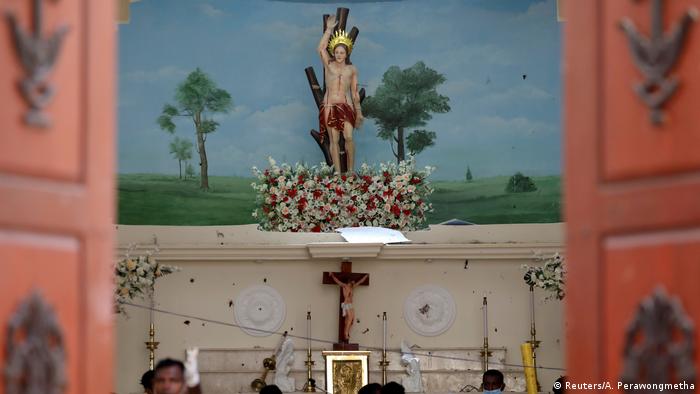 Of course, the attacks in Sri Lanka were targeted against Christians. How else would you describe the assassins blowing themselves up on the highest Christian holiday in the middle of three fully occupied churches, as well as in luxury hotels, which are primarily visited by tourists from the Christian-influenced Western world?

Many other things, however, are still questionable at this point. Whether, for example, it really is a work of the "Islamic State" (IS), as the terror group claims three days after the crime; IS has claimed credit much sooner on previous occasions, even if later it turned out that there had been no connection at all. Or whether the mass murder on Easter Sunday was indeed a targeted retaliation for the attack on mosques in Christchurch, New Zealand, as the government of Sri Lanka now believes.

Doubts about 'retaliation' are called for

International terror experts have well-founded doubts about this. The preparation of such a choreographed series of attacks takes much more time than the five-and-a-half weeks that have passed since the massacre in New Zealand.

For the more than 350 people who have died, all this is irrelevant. Nor does it matter to the 50 Muslims who were shot by a right-wing radical lunatic during Friday prayers in two mosques in Christchurch on March 15. The vast majority of them simply wanted to practice their religion undisturbed, to live their faith ― as is the fundamental right of every human being.

The brutal death of all these people also seems so incomprehensible and pointless because there are no religious conflicts in Sri Lanka in which Christians would be involved, nor are there any known problems with the Muslim minority in New Zealand.

Here as there, fanatics used bombs and shootings to produce exactly the clash of cultures and religions whose victims they consider themselves to be. But the actual victims, the dead and injured of Sri Lanka, New Zealand and innumerable other places, have absolutely nothing to do with this fight. They didn't want it. They did not seek either struggle or war, only their individual happiness, like every normal person.

The logic of terrorists (if there is any at all) cannot be deduced with rational means. That's why you certainly don't need to have a dialogue with these people ― what would that even entail? You shouldn't fall for their game by adopting their perverse "friend versus foe" view of the world, either. Only mourning is appropriate in view of this insanity. Those who can should also pray for the victims and the perpetrators.

There is no point in immediately canonizing all the victims of the Easter Sunday attacks, as has been called for by some in church circles who consider themselves particularly pious. Fortunately, even the pope choosing not to listen to these individuals.

Cries of vengeance and the cult of martyrdom ― that is exactly what the masterminds of these crimes, who attempt to clothe terrorism in religious zeal, are hoping for in order to justify their next deeds. No, nobody should do them that favor. Better police and intelligence work, on the other hand, is worth the effort. What is often just as disturbing as the cruel attacks themselves is how authorities failed to prevent mass murder despite the information they had in advance.

US: Idaho top court will not block near-total abortion ban 40m ago

Author Salman Rushdie on ventilator after stabbing 49m ago

Opinion: World Cup 2022 — No anticipation, only chaos in Qatar 19h ago