Opinion: Ukraine on the brink of civil war

The situation in Ukraine is escalating with devastating effects - for Russia as well as Europe. All sides are doing far too little to control it, writes DW's Bernd Johann. 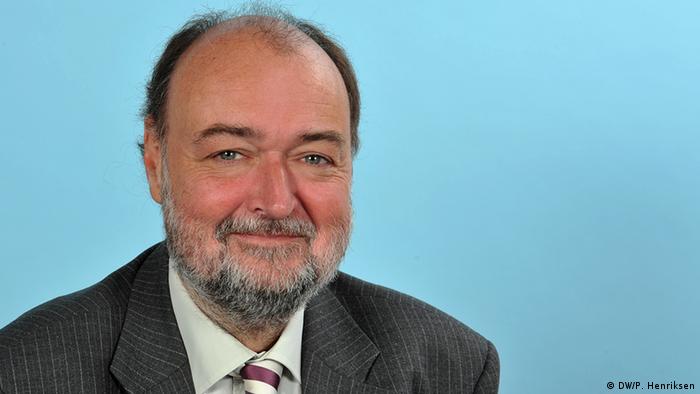 An inferno could engulf Ukraine with far-reaching consequences. A civil war in the country would divide Europe into two blocs that would oppose each other politically, economically and militarily. Ukraine would sink into chaos and violence. It would be a humanitarian disaster. Hundreds of thousands of people would also flee the country on the brink of a civil war.

No one can want a Syrian-type situation in Europe, neither the separatists in Donetsk nor the government in Kyiv.

Such a scenario would also be a nightmare for Moscow and Brussels. Paritcularly the neighboring countries, such as Russia, Poland and other bordering EU member states, would be confronted with suffering people requiring food, medication and temporary shelter.

It doesn't have to come to this scenario. But it's becoming increasingly difficult to halt Ukraine's disintegration, which is being driven not only from within, but also from outside by Russia.

Kremlin leader Vladimir Putin, in his nationalistic rhetoric, claims that Ukrainians and Russians are one people. But in truth, he is driving a wedge between people, while at the same time militant extremists with support from Moscow are provoking a war.

Russia's annexation of Crimea, the violent pro-Russian groups in the east and now also Odessa in southern Ukraine have fully changed the coexistence of people in Ukraine in just a matter of weeks. The port city of Odessa on the Black Sea, long treasured as a multicultural and cosmopolitan city, is now a flashpoint.

Russians and Ukrainians have jointly built up Donetsk into one of Ukraine's most important industrial regions. Now the work of generations threatens to be destroyed.

Anger and hatred increasingly dominate the action on both sides. But where are the moderate politicians to approach for support?

More than ever, the government in Kyiv needs to seek a dialog with people in the eastern part of the country. Granted, it has the right to take action against militant separatists, who hide in buildings and take people hostage. But it must put political concepts on the table to unite the country, including the debate on federalism and greater autonomy for the individual regions of Ukraine.

Politicians and entrepreneurs from eastern Ukraine need to do more. They have always played a huge political role in the country. Now many of these influential people are sadly standing by and watching the country go to pieces.

Then there's Russia. If the Kremlin, as it claims, is interested in finding a political solution to the Ukraine crisis, then it should bring the so-called pro-Russian forces to sit down at the negotiating table with Kyiv. Instead, the Kremlin continues to mount a campaign against the leadership in the Ukrainian capital. It is stirring unrest in the hope of preventing the planned Ukrainian presidential elections on May 25 because it doesn't want democracy and reform in Ukraine.

The release of the OSCE (Organization for Security and Cooperation in Europe) observers demonstrates Moscow's direct link to the separatists. If Russia wanted to find a political solution to the Ukraine crisis, it could.

The European Union, the Council of Europe and the OSCE as well as the UN Secretary General are already helping.

If Russia wants to prevent a civil war in Ukraine, then it should join the efforts of the international community.

Bernd Johann is head of the Ukrainian department at DW.

Odessa - next flashpoint on the Black Sea?

Violent clashes in Odessa have taken many observers by surprise. The port city in southern Ukraine is more important to Kyiv than Donetsk in the east. Odessa might turn into the next crisis spot. (06.05.2014)

European foreign ministers are meeting in Vienna to discuss the ongoing Ukraine crisis. It comes after at least 30 people were believed killed in the east in fighting between army troops and pro-Russian separatists. (06.05.2014)

Ukraine has sent an elite national guard unit to its southern port city of Odessa, to stop the spread of fighting between government troops and a pro-Russia militia. Neighboring Moldova has put its borders on alert. (05.05.2014)