Thomas Müller has just signed a new contract that will keep him at his boyhood club until he‘s 33. It’s not just his renaissance on the pitch that makes him critical to Bayern Munich, says DW’s Matt Pearson. 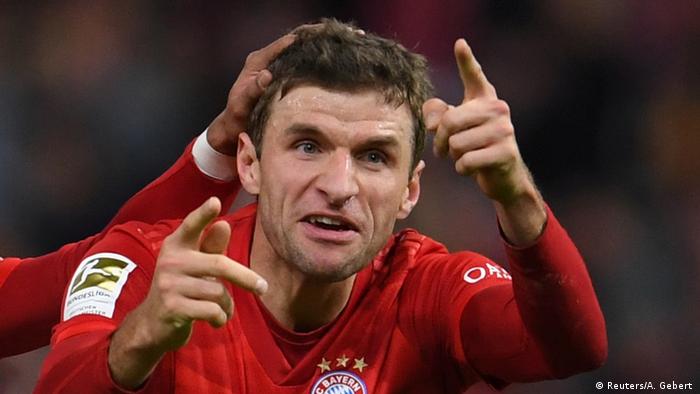 By the end of his new deal, which runs until 2023, Müller will have been with Bayern for a staggering 23 years - from a 10-year-old boy to a senior figure at one of the world's biggest clubs.

And it's Bayern's global profile that makes the local boy, in many ways, their most important player.

Football at the top level has become an increasingly globalized business. Super clubs like Bayern, or Real Madrid or Manchester United, have fans from Bangkok to Berlin and, in most cases, make less and less of their money from local fans turning up at the gates on a Saturday afternoon.

Loyalty and identity still matter, though. Fans sitting thousands of miles away might identify with a club's success and glamour but many also buy in to a club's tradition and location. So does Müller. For all the importance of foreign fans, those who turn up every week and create atmosphere are still much more likely to come from Munich than Miami.

The pictures of Müller dwarfed by a Bayern shirt as a young boy, or in lederhosen at Oktoberfest, offer the backstory fans (and marketers) crave. They also make it believable when Müller calls the club his passion.

The same is true for Sergio Ramos at Real Madrid, Marcus Rashford at Manchester United, Marco Reus at Borussia Dortmund. "I think it's important for the fans that there are guys like Thomas Müller and me," said the BVB skipper of his rival on Tuesday. "Then they realize that we identify with their club as much as they do."

Given that Bayern have struggled to produce homegrown players since Müller's emergence in 2008, the presence of such a player is hugely significant.

The current first team squad are all imports, though David Alaba was signed from Austria as a youth team player, and the days where players represented their local area are fading. Bayern have long placed a particular importance on signing German players but a homegrown superstar is the next level.

But Müller is no token gesture to some romantic notion of the past. The arrival of Hansi Flick, another man with strong ties to the club who signed a new deal this week, has seen the 30-year-old re-emerge as a key player.

His 16 Bundesliga assists have him challenging Kevin de Bruyne's record for the most in a season and the spark is back. Müller's sometimes ungainly style and unorthodox technique can highlight any loss of form but before the season was put on hold by the coronavirus, he was back to something near his best: directing operations, making those elusive late runs and always a step ahead in his mind.

The new deal will take him to the ripe old age of 33 and, barring a potential late cameo abroad, it's difficult to see Müller ever pulling on another team's shirt.

It's not so difficult to see him joining the gallery of greats that make up Bayern's various boardroom roles, but that's for the future. Right now, Thomas Müller is critical to Bayern's present.