Germany was nearing the target incidence of 50 infections per 100,000 people. But now that goal has been decreased to 35, and it could drop again. This decision is sure to disappoint many people, says Marcel Fürstenau. 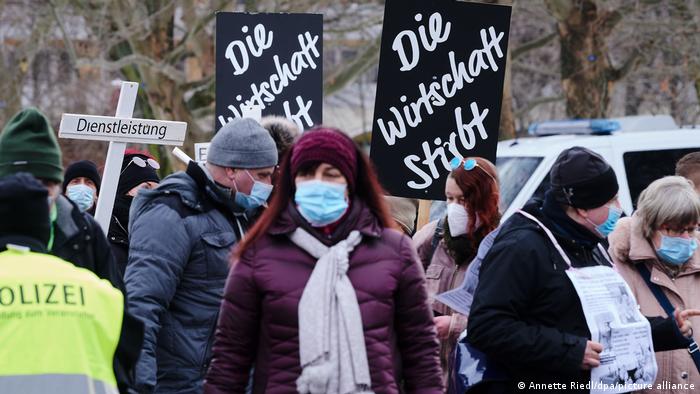 A number that has been bandied about considerably since the beginning of November is 50. Only when the seven-day coronavirus incidence rate had fallen to 50 infections per 100,000 people, Chancellor Angela Merkel said, would it be possible to ease shutdown measures to slow spread.

So, for months, Germans had looked forward to the day when this goal would be achieved and the associated reopening of schools and kindergartens, stores and restaurants, cinemas and museums, as well as the renewed right to socialize more and even to travel. The hopes were fed by the chancellor herself, as well as the heads of Germany's 16 federal states. Since the pandemic began in March 2020, this crisis government, which is not provided for in the constitution, has decided almost single-handedly what is permitted and — more importantly — what is not permitted in Germany.

And now this body has made a new decision that is sure to disappoint a lot of people. That target of 50 has become 35 infections per 100,000 people before the easing of restrictions can begin. The justification for this is apparently new coronavirus variants. But, since the very beginning, health officials have warned that these would develop as the pandemic progressed. Nobody should pretend to be surprised that they have.

Leaders at the federal and state levels are advised by the country's top virologists, who have been drawing up vaccination strategies and planning easing measures for months. Germans are used to the science changing by now. But we had come to count on the number 50. This target was repeated in press conferences, talk shows and interviews over and over again, like a mantra.

For almost four months now, most of Germany's 83 million inhabitants have stuck admirably to the pandemic rules. Yet they will not be rewarded for their discipline as quickly as planned. Anyone who complains is lectured to from above and told that the number 35 has been part of the Infectious Diseases Protection Act since November. That's true — but it was written in very vague terms, reflective of the country's pandemic policy overall.

The government could have considered the opposition's proposals to introduce phases for relaxing the measures instead of dismissing them as populist. After all, the Free Democrats, Greens, Left and Alternative for Germany parties have also consulted with top scientists and economists.

One German regional leader has now exploded: Armin Laschet, the possible chancellor candidate for the Christian Democrats (CDU) and the state premier of North Rhine-Westphalia, home to 20% of Germany's population. He said life did not consist only of "incidence rates" and that new thresholds should not be found "in order to prevent life from taking place again."

There is no question that that statement is polemical and populist. It says out loud what many are thinking. Some might say Laschet is simply being opportunist, particularly as he bears partial responsibility for the current plan not to ease the shutdown before the incidence rate has fallen to 35.

From this perspective, Laschet — the CDU's new leader and the party's most powerful and influential politician after Angela Merkel — is not very credible. Yet he is offering a voice to the Germans who are tired of the miscommunication with regard to pandemic policy.

Now that 50 has become 35, many are asking what number is next? Hopefully, not zero.